Ava reaches the valley of Valhalla weary but energised by the sight of the great waterfalls and towering statues, she is home. 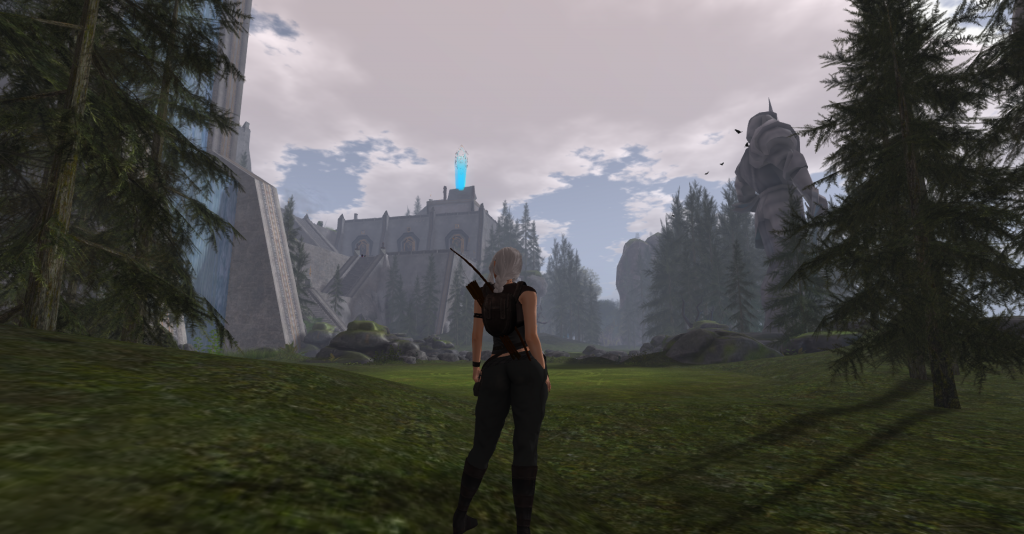 Rounding the bend in the path she sees the waterfall in it’s full glory and the platform at that top which is her destination.

She scales the mighty steps for the first time in a long time and enters one of the great halls. 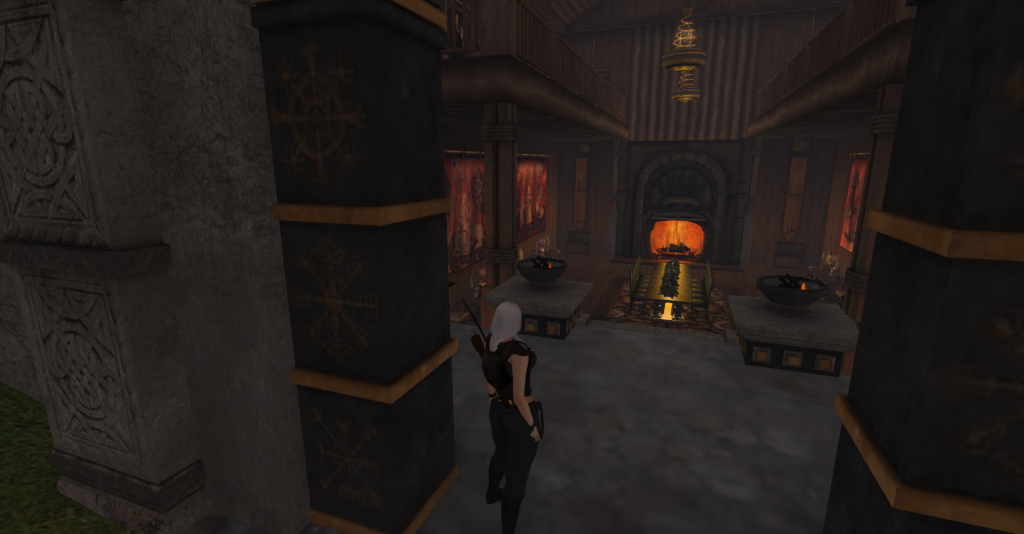 She takes a moment to refresh herself and change out of her travelling clothes before taking a seat in the hall. 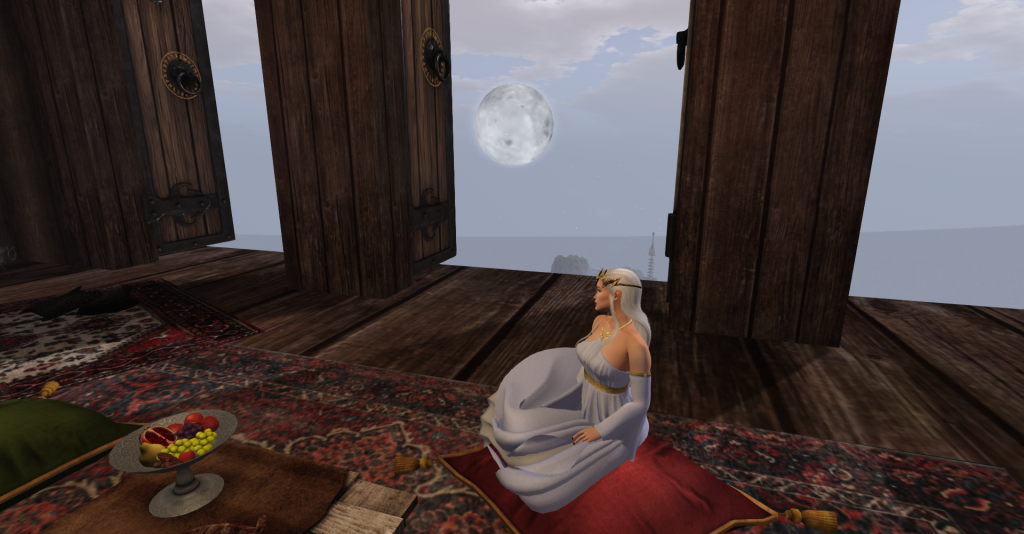 She doesn’t intend to spend long there, she knows she has a ritual to prepare for! Once she feels rested somewhat she leaves the hall and makes her way to high platform of the tree. 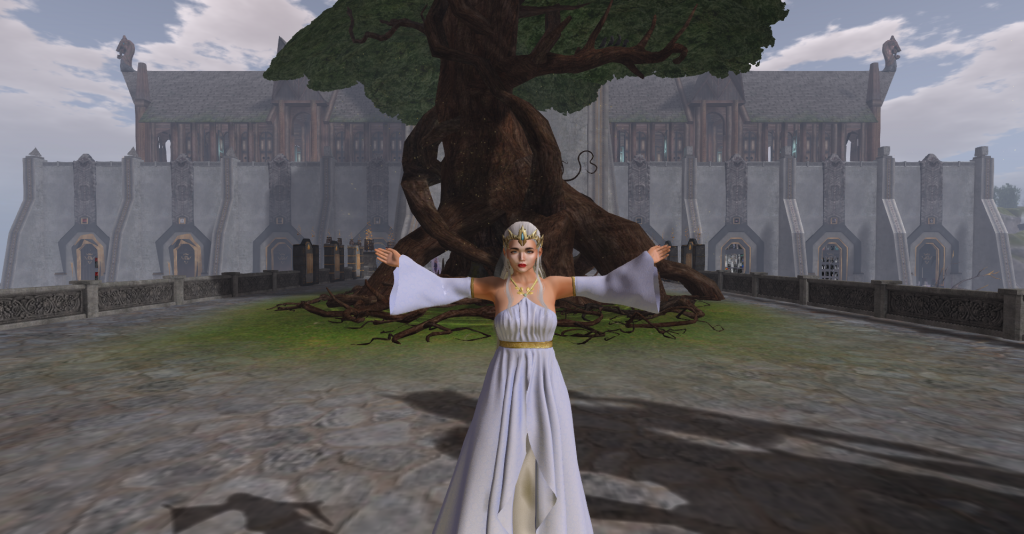 On her way down she pauses to admire the valley in all it’s glory. 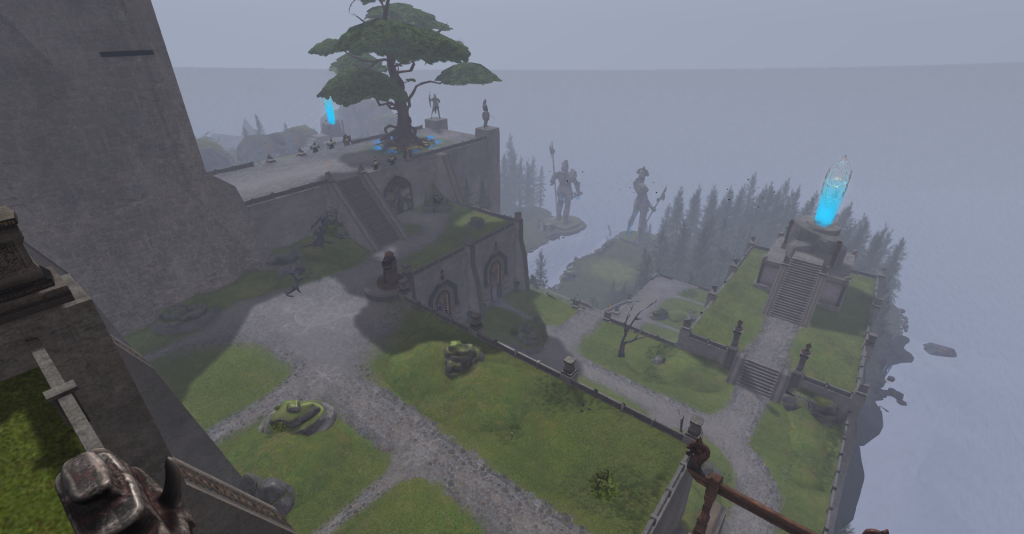 This post was featured on the  SecondLife Community Blog 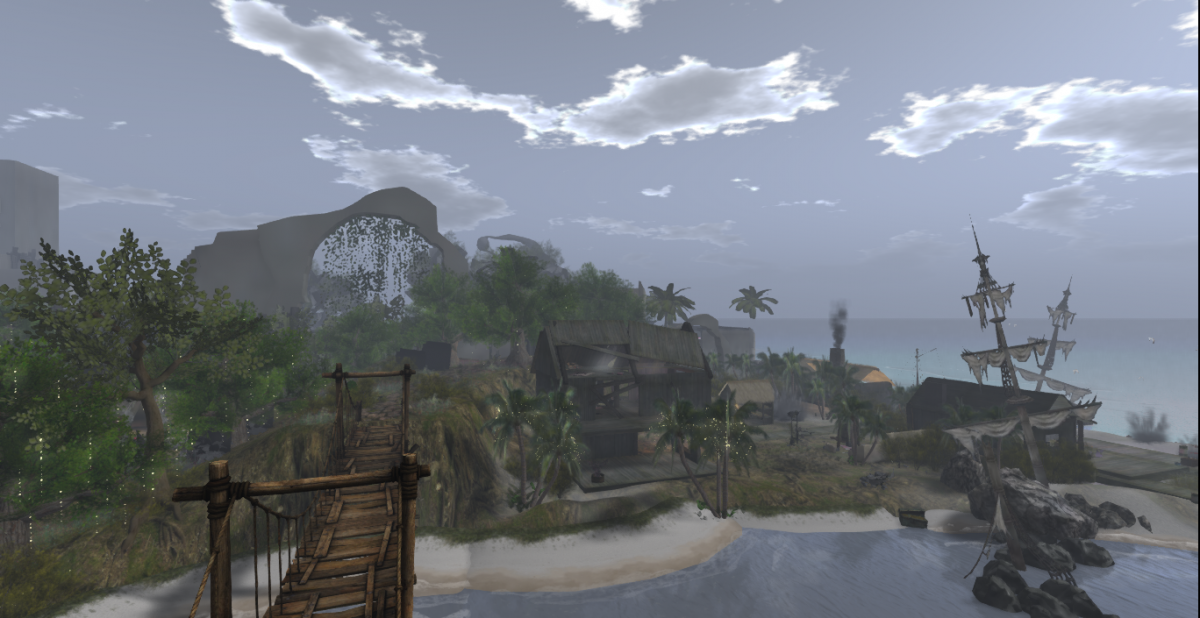 While in 2019 I was able to follow the annual Roleplay, it wasn’t til last year that I was able to explore much more of the Faire. What is tricky though is trying to find one particular highlight, almost impossible given the size and marvelous works of creativity we were presented with!

I thought it would be more realistic to go through my snapshots and pick out a number of them instead. One region that’s missing here is Kurak where the 2020 Roleplay took place, well that’s still to come in another post, because there so many they deserve a post of their own. 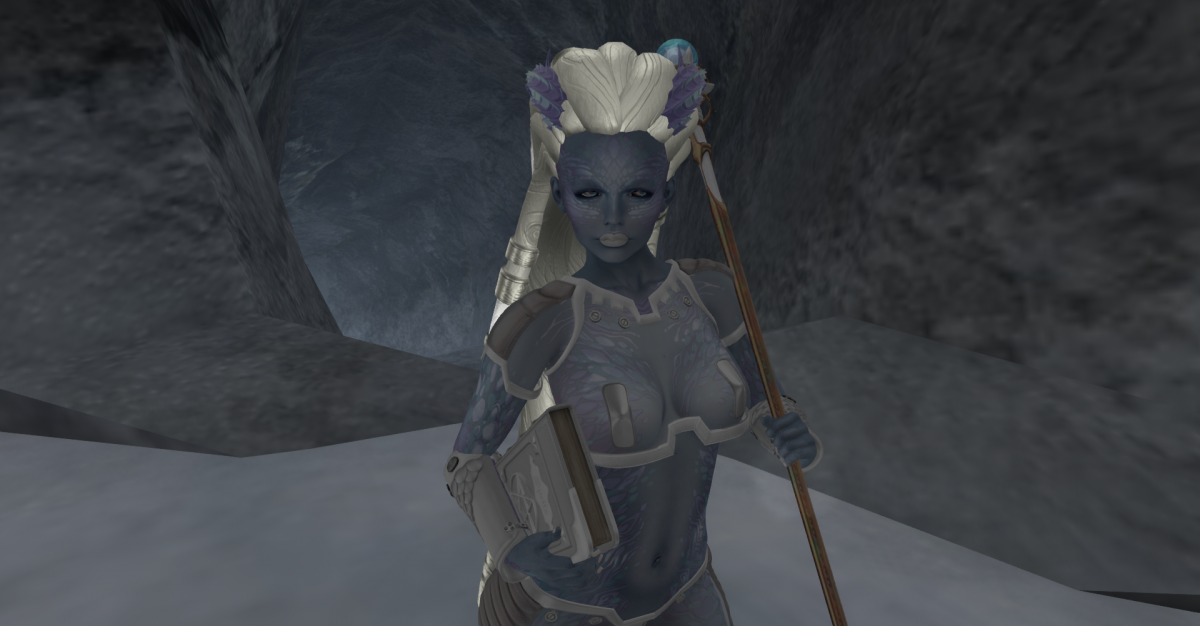 Each year Fantasy Faire presents a number of Blogger Challenges. This is my attempt at “My New Shiny”, finding a new shop/creator you love.

This one isn’t *entirely* new to me, it’s more a revelation of discovering how much more they create and its amazing!

I liked the look of the eyes and skins that were generously left in the blogger room so I thought I’d have to check out their store. There was a couple of things I didn’t realise however: 1. I’d been to the store on my marathon lap of the Faire on Blogger day and said I’d come back. 2. I already had some of their creations in my inventory.

The prefix of all their items “:[P] :” nagged at me seeming familiar so I searched my inventory and came up with this outfit. I was very surprised since I’d acquired it at Cyber Fair 2020 and hadn’t realised they did other fantasy genre stuff. These “Angelic” bracers also showed up, again another surprise.

So off to their Faire store I went and found some more lovely items this staff, spell book and beautiful skin.

I’d already decided I was going to go with a light look for this when I’d put on the armour and found it was set to white. This skin was just perfect match, since the outfit can be made sheer, I could show it off wonderfully.

This hair is also available at their Faire store, in association with TRAP (who I confess I don’t know of, so something else to check out!). It comes as a single rigged piece or multiple parts you can position yourself. It comes with multiple huds for colouring differed parts and metals. 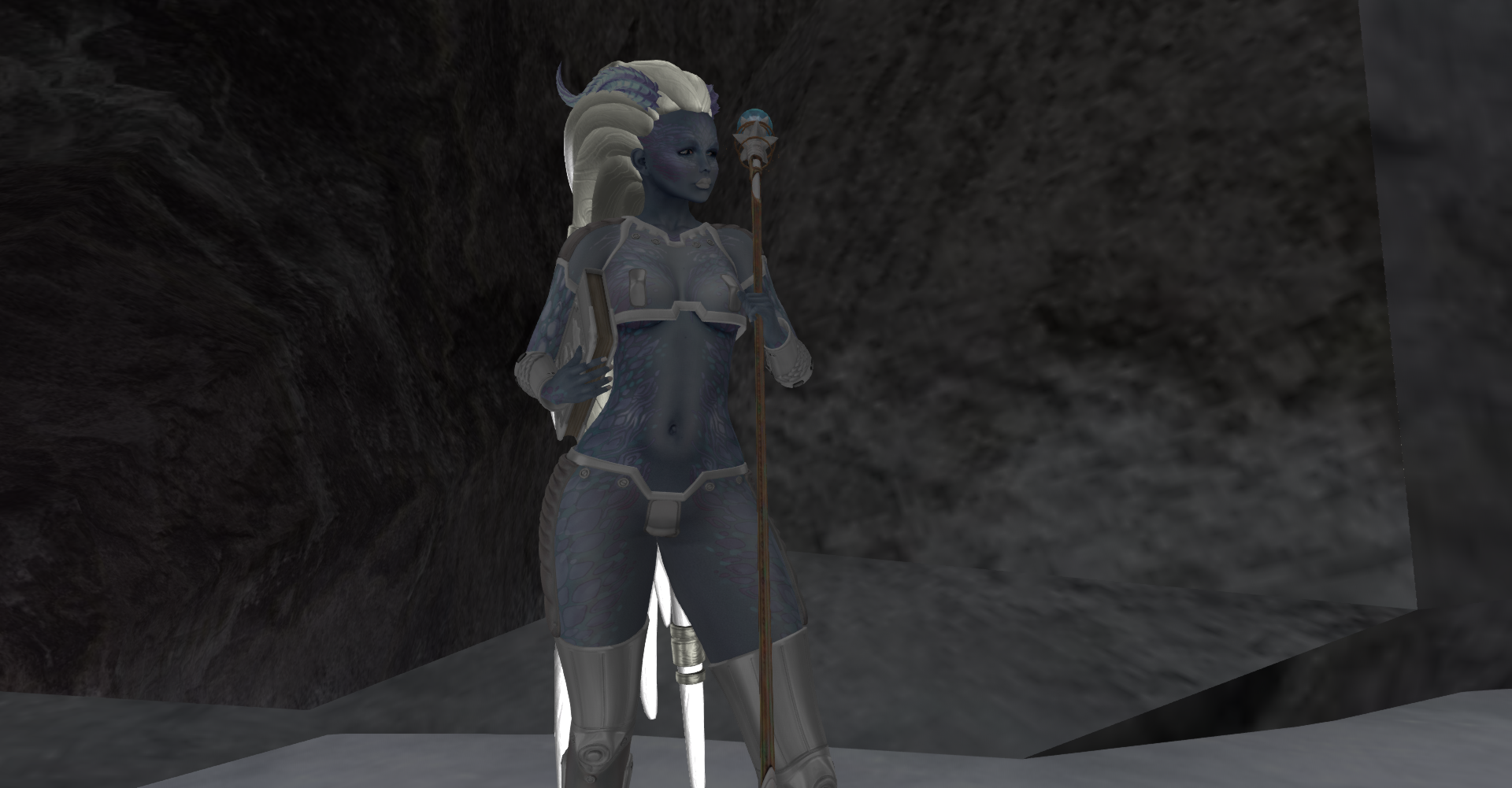 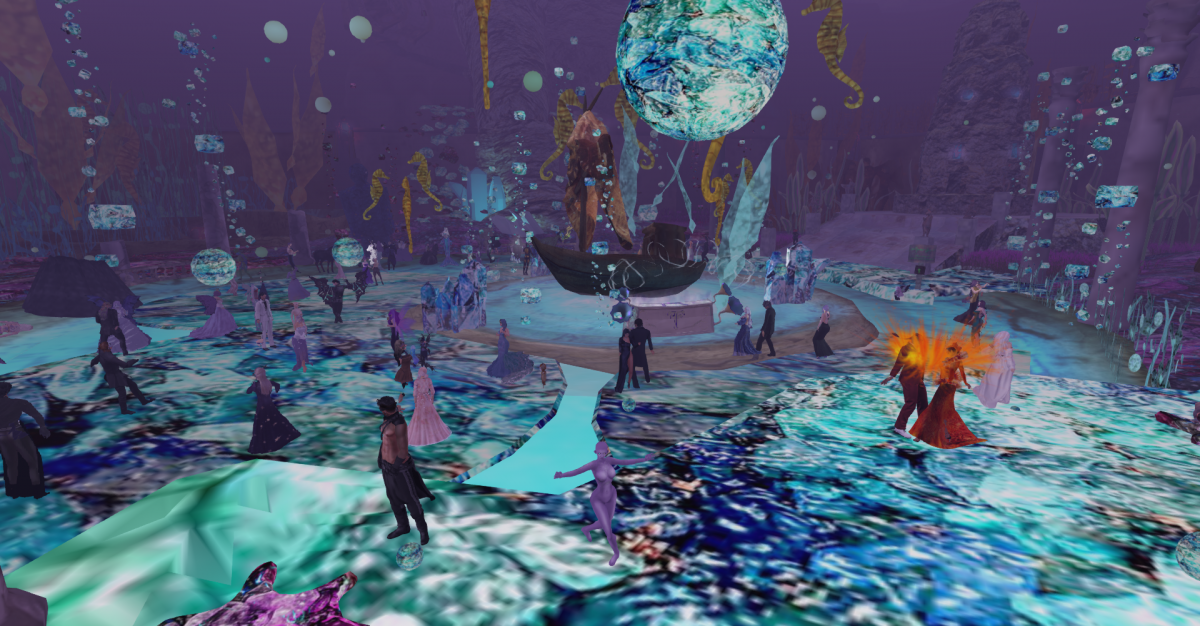 The First of two Fantasy Faire Masked Balls that will be happening during the Faire. A great time was had by all I’m pretty sure! I captured a collection of some of the weird,wonderful and fantastic avatars that were in attendance.

Stunning collection of characters you only see in SL and only ever at the time at Fantasy Faire! 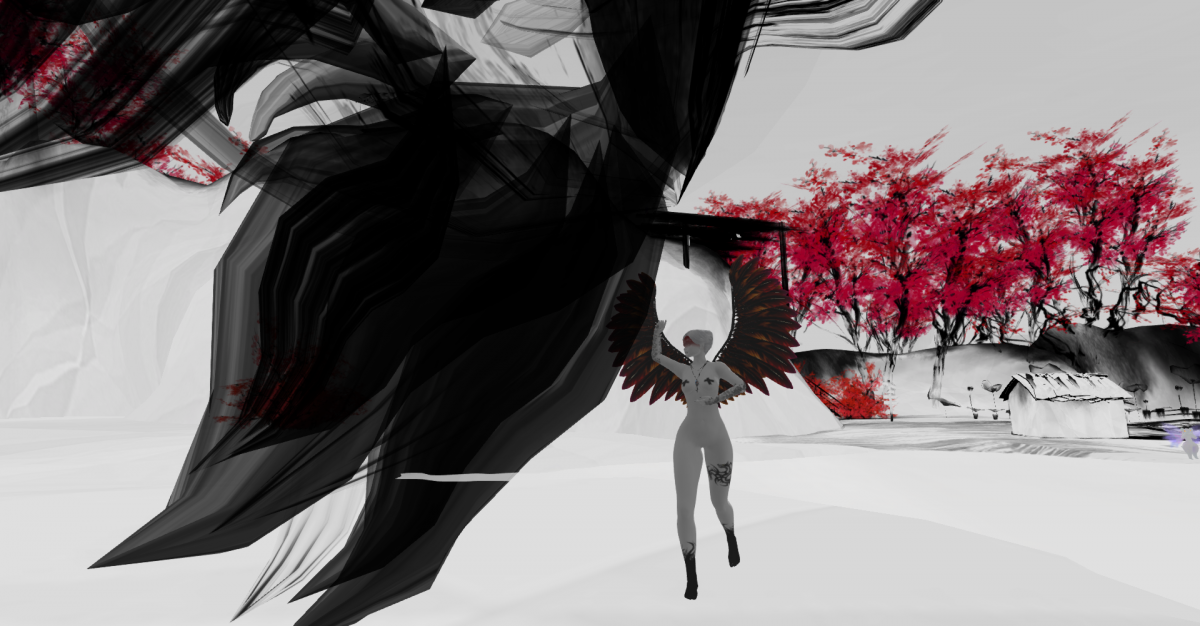 I attended the interview with Fiona Fei, creator of the Faire Region Ling Xaio Long, being interviewed by Zander Greene and what a fascinating story it was.

Fiona was born in China, but moved to the USA when very young. One lasting memory of her childhood in China was of lotus blossoms and this love of the flower stayed with her through school.

Comment from Fiona: My thesis was on charcoal shaders in graduate school, which inspired the art currently in Second Life. The lotus blossom imagery stayed with me till now, being featured in my ShuiMo art in SL.

Trained as a painter, she starts with sketches and translates them into the 3D environment. Many of the textures that make up the region she physically painted and scanned for use in the build.

Comment from Fiona: I sometimes use photography of my 3D art installations to play with the illusion of 2D paintings. I try to present them on traditional Chinese scrolls to add to that effect.

She likes to play with the transiton between 2D and 3D, not just making environments such as this one, but also then photographing them making 2D art of something that’s actualy 3D.

The idea of the region is based on a Chinese proverb:

This is the story of an artist that was so skilled at painting dragons he didn’t finish pictures, he always left the last brush-stroke unmade, for fear that the dragons would come to life.

She used the limited pallette of white, black and red partly because in this form of physical painting, dyes were originally scarce, but also because it focusses on the form. There are large areas of white because it’s how chinese artists show distance or space. The choice of red was deliberate because of being important in China. Red represents luck, good fortune and overall positivity.

She saw an advert for Second Life years ago that said it was a place where she could create or be anything. The draw was the ability to create in real-time, spending a lot of time in sandboxes, challenging herself and later others in building competitions.

In my pictures I took inspiration from the white background of the region and made my avatars body the canvas. I created a plain white skin on which to apply inks, in the form of tattoos. 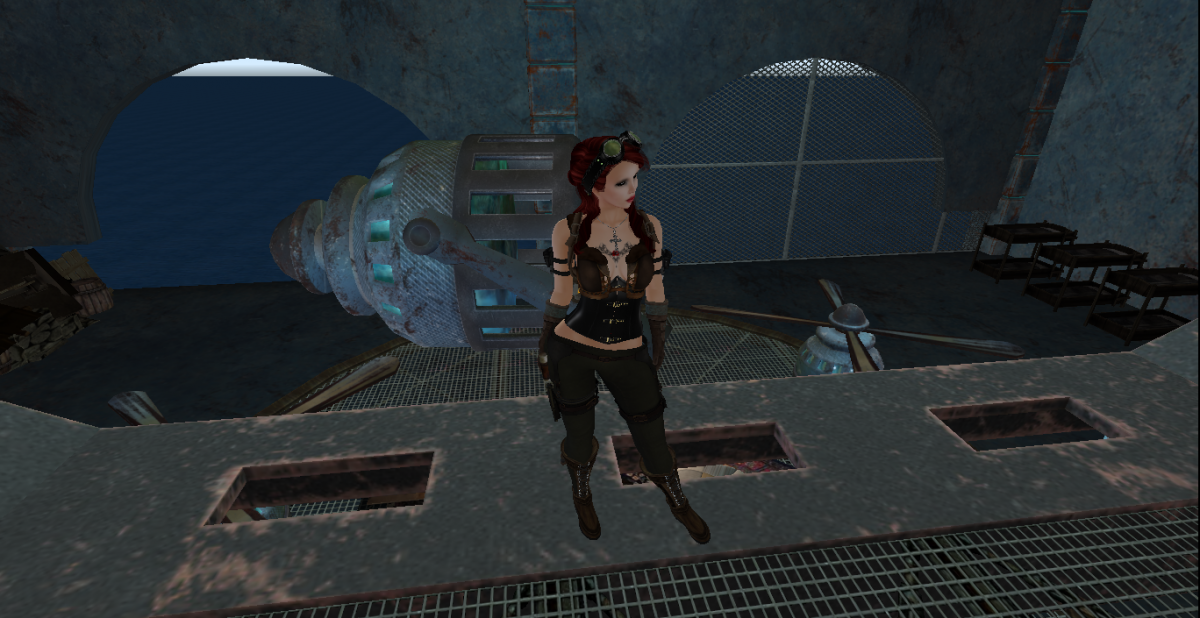 2019 was the first year I was able to attend any of the organised events at the Faire.

I decided that year that I’d like to try and follow the years organised Roleplay story. I thought today on the eve of the 2021 Roleplay starting would be a good day to rememberit.

That year told the story of The Bubbo Owls and their adventures around the Fairelands. I did write a blog post at the time, but remembering is such fun! 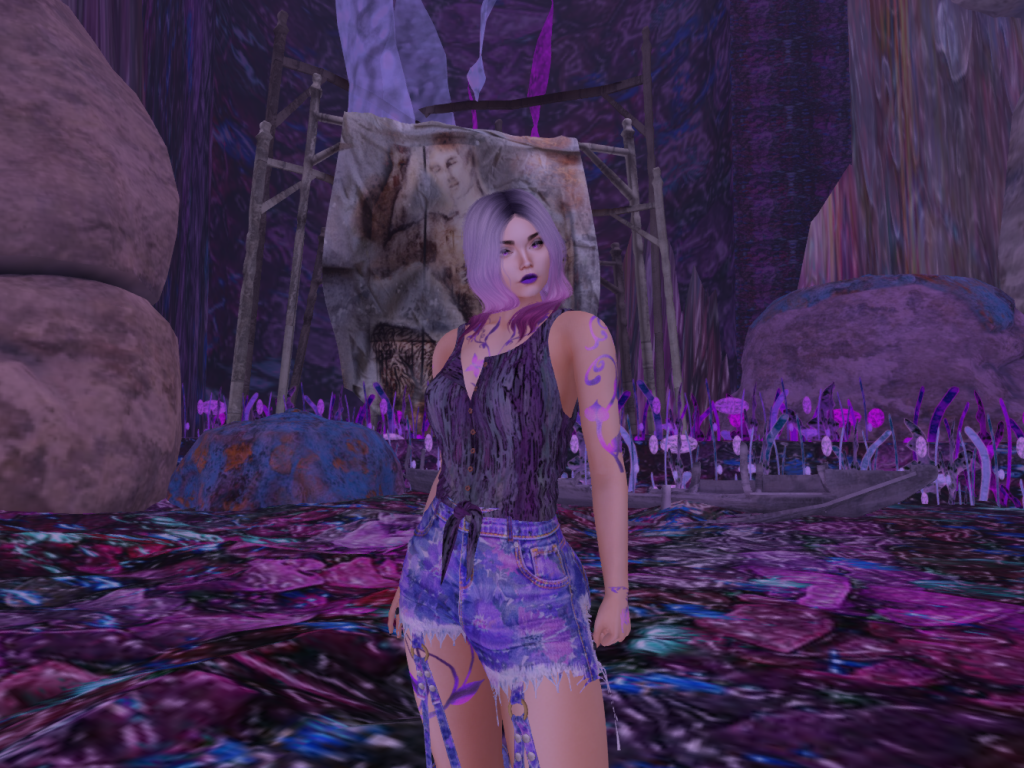 I am not a “pink” lady, anyone that knows me, or just a glance at my flickr or past posts will testify. However I’m not adverse to a bit of purple now and then.

This post was going to be called “Pretty in Purple” when I was putting the outfit together and I thought I’d find a suitable setting in the Faire. When I found myself in Paer Thura and felt this was the perfect place.

This ripped denim outfit from Dark Fairy Fashions seemed to hit the spot. Rough around the edges like me and in the right colours for when I’m not feeling so dark and inspired by the bizarrely beautiful location!

It leaves plenty of skin on show which just begged for the right tattoo. Fortunately Nefekalum has just the thing also at the Faire. 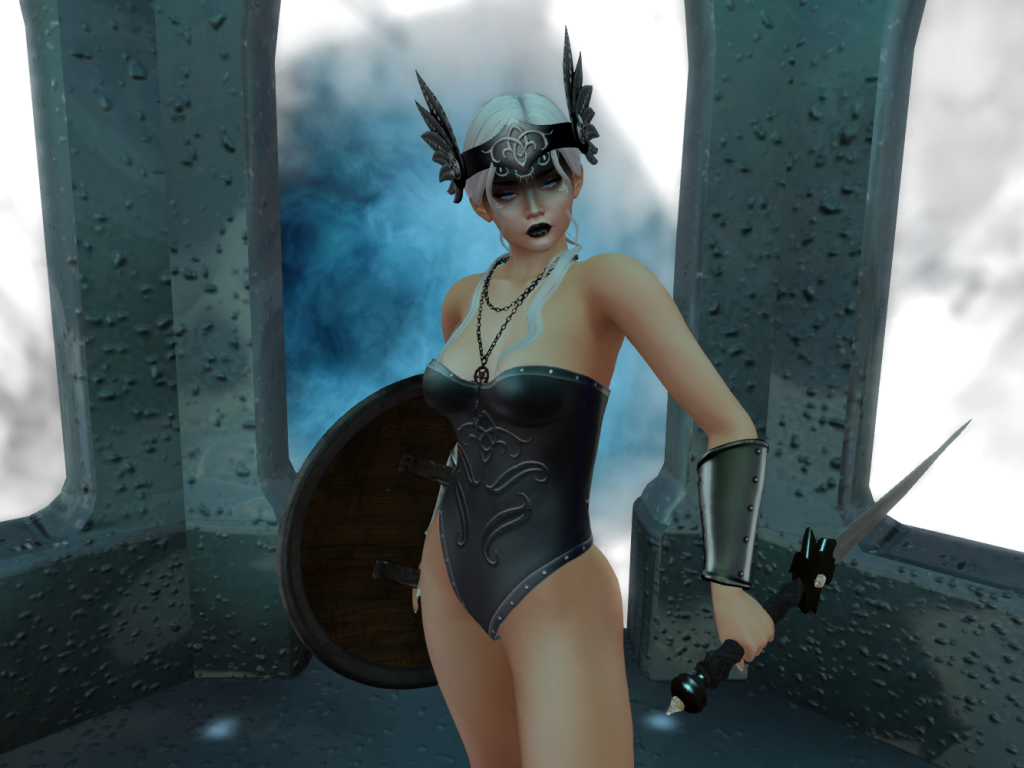 The Valkyrie stands guard at the portal to the Mortal Realm. Not the most exciting of jobs, since the chances of Mortals finding the path that their winged mounts take to bring the souls of dead warriors to Valhallah is pretty slim. But Mortals have now developed their airships, which at least making it a possibility to be guarded against. 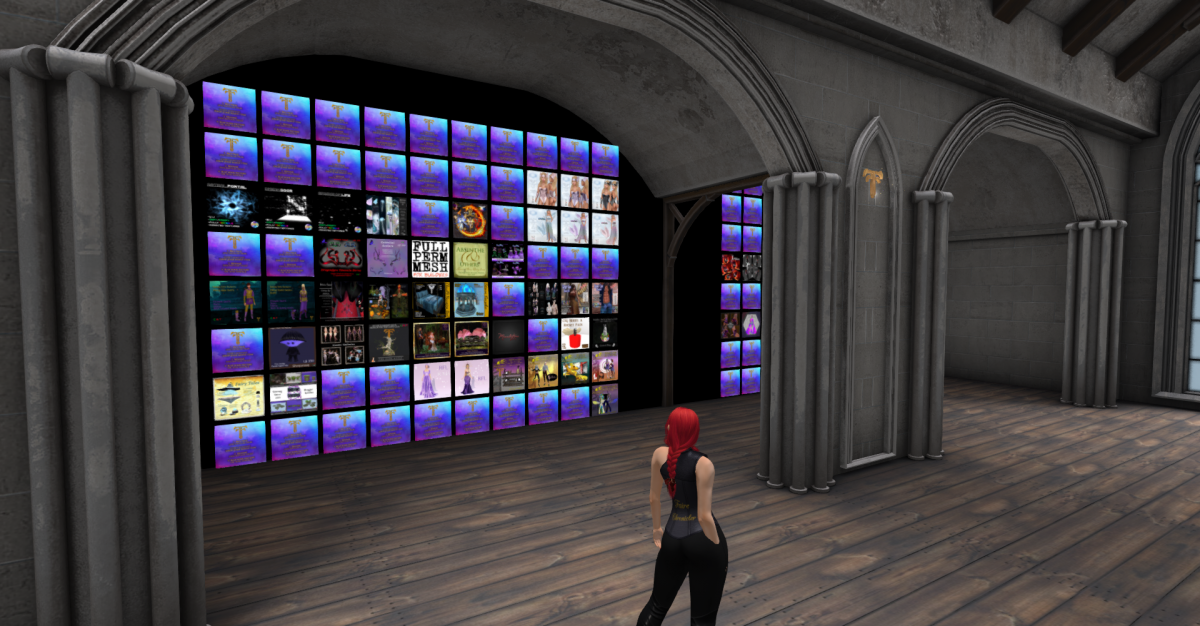 Now this may be a very strange thing to be posting about, it’s not particularly glamorous, or something you can buy but it’s important in another way to me. (For those new to my blog, I post about stuff that happen to me in my SL not just things or places, this I think is one of those significant moments.)

I’m in the “Blogger Room” of Fantasy Faire 2021. It’s not located within the Faire regions (we have to keep out of there til the 21st) and its location is only known to the organisers, merchants and official bloggers. This is where merchants put review copies for the bloggers to use in their posts about the event.

This isn’t just special because it’s my first time in the Faire blogger room, it’s also the first time I’ve been an official Blogger for any event and therefore first time in any Blogger Room, so quite milestone I think!

Fantasy Faire is I think unique in the amount of freedom and flexibility it gives to its bloggers. We’re not given quotas of x items from x number of shops and so many posts like some events. Its not all about shopping like those events, although obviously that plays a large part with all the cool new stuff merchants release and to raise money for RFL. The fantastic landscapes and crazy environments the World builders create are what I love and the stories and adventures they inspire.

Combining what the generous merchants have left for us with the no-doubt beautiful lands, I hope to have some fun posts for you. I suspect I shall be making several trips here, since as you can see in the image above, there are still lots of unfilled boxes and another wall of them out of shot, the room is less than a quarter full, so I look forward to seeing what other delights we are offered!

Featured on the Second Life Community Blog on 19 April 2021