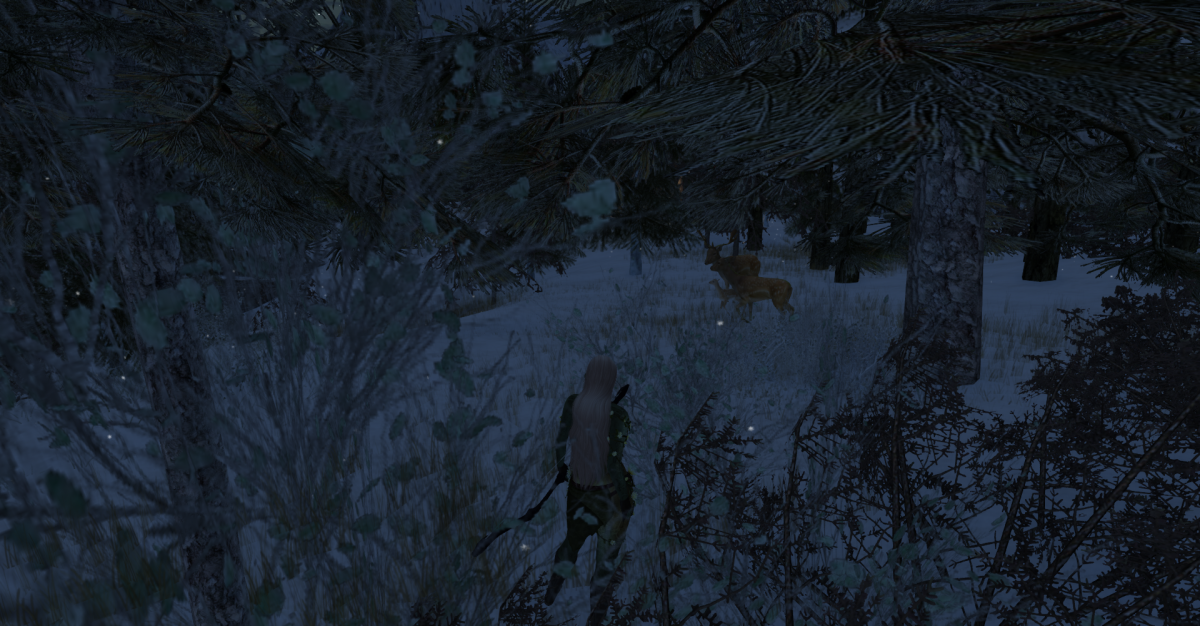 The Dryad wakes slowly like a flowers petals opening. When her eyes open she suddenly becomes aware of the temperature. It’s too cold, it’s too dark, she shouldn’t be awake yet. Being bound to the cycle of nature and the Seasons, she shouldn’t awake until Spring when the first green shoots appear. Something is wrong, she must find out what’s going on. Sticking her head out of the entrance to her underground sanctuary, she looks around to see white everywhere. 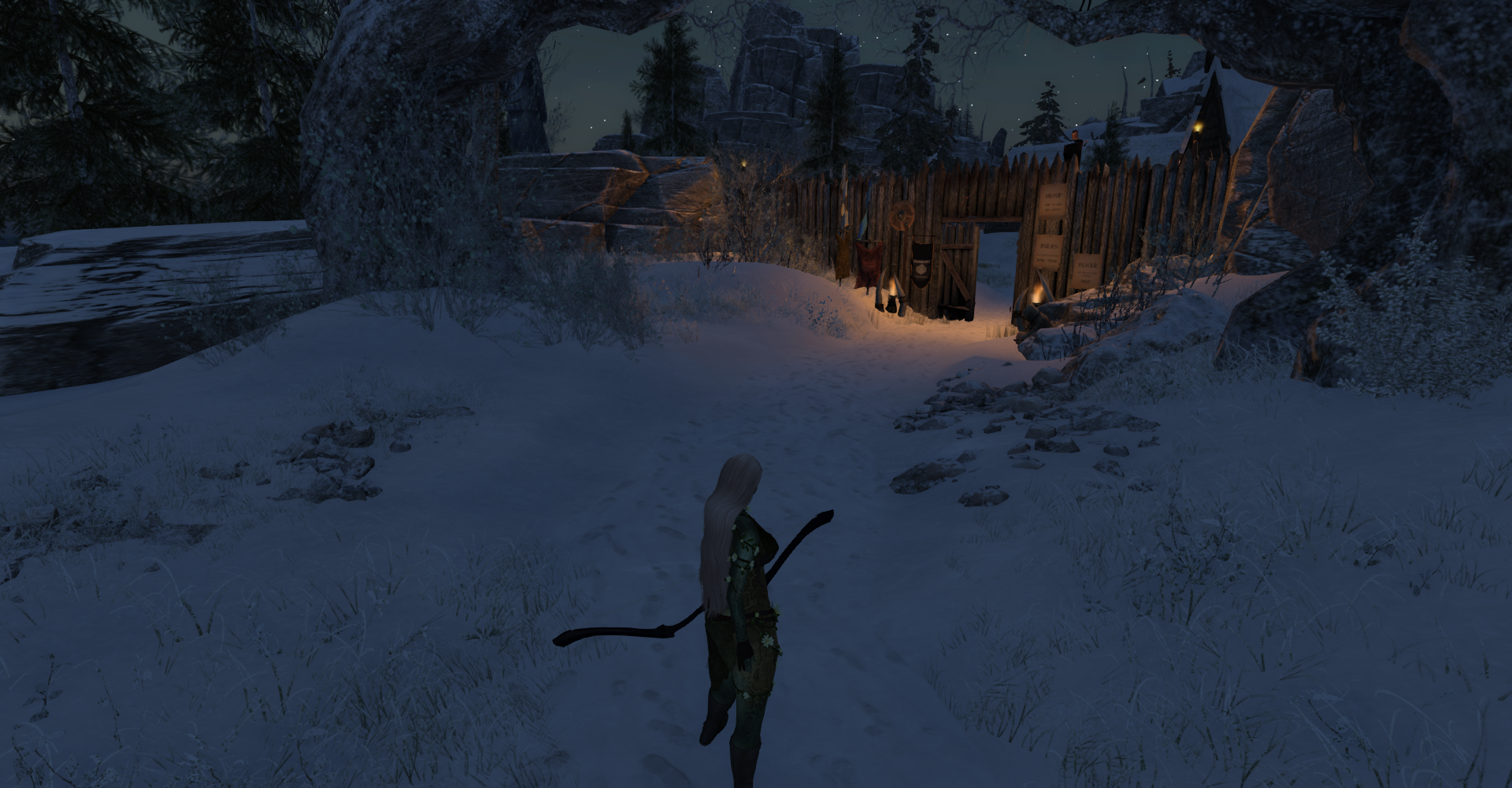 She finds some boots to protect her feet, usually she’d be barefoot but dare not walk on the freezing snow, frost is as dangerous to her as it is to plants. As she walks through the Human settlement she sees green grass poking through the snow, this is what’s woken her but how?

There’s no sign of industry that she’d heard of further south that made the climate warmer, just the usual primitive wooden homes. She visits a few of the buildings to see if there was anything amiss but found nothing unusual.

They have ships in the harbour so perhaps they have brought something here, or learnt of something that’s causing the problem.

Then she glances up and sees the temple up on the mountain, perhaps that has the answers. 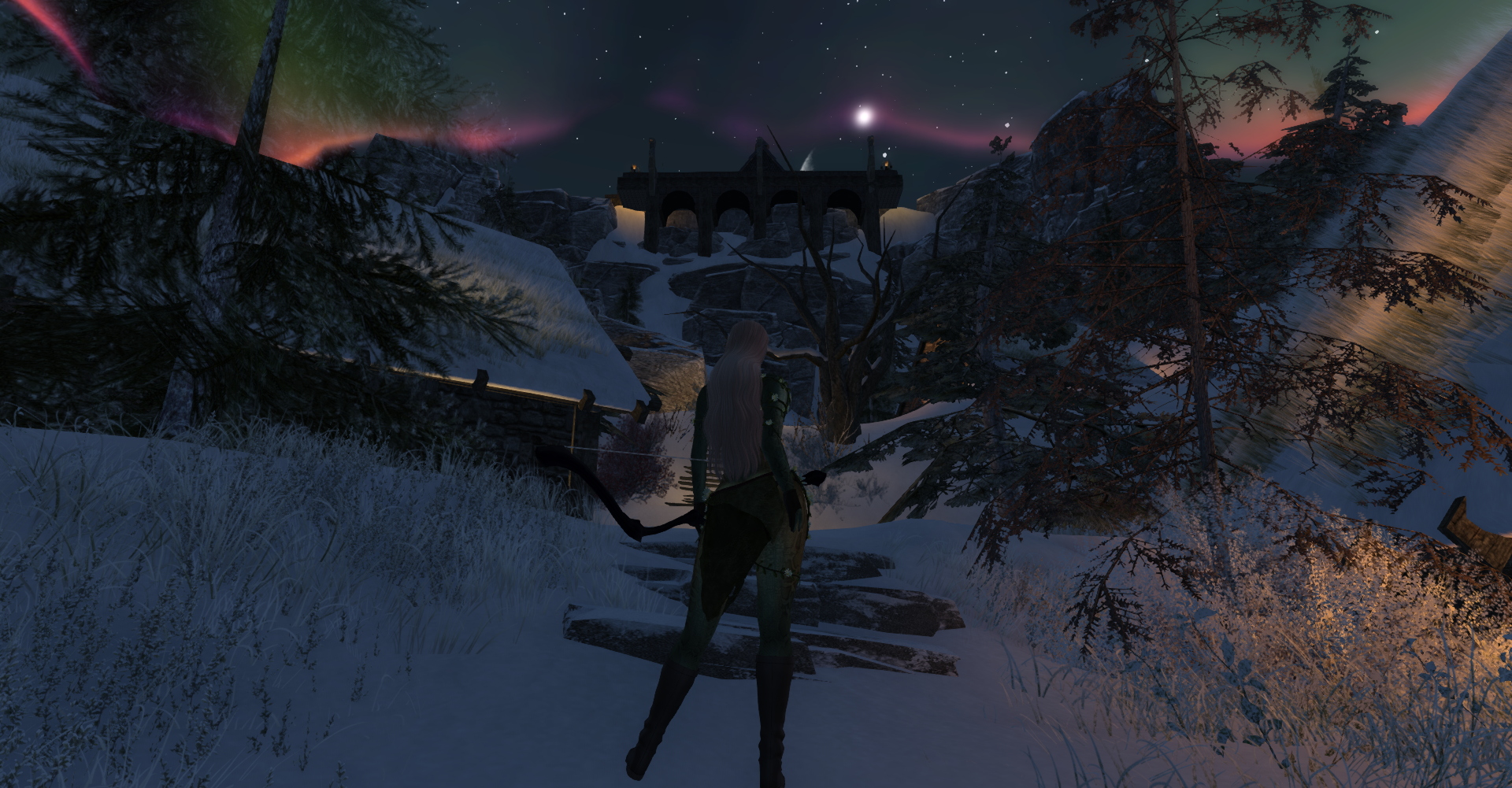 She wishes she’d brought a cloak as she begins the ascent, touching the trees on the way up for reassurance, they are still slumbering as she should be. 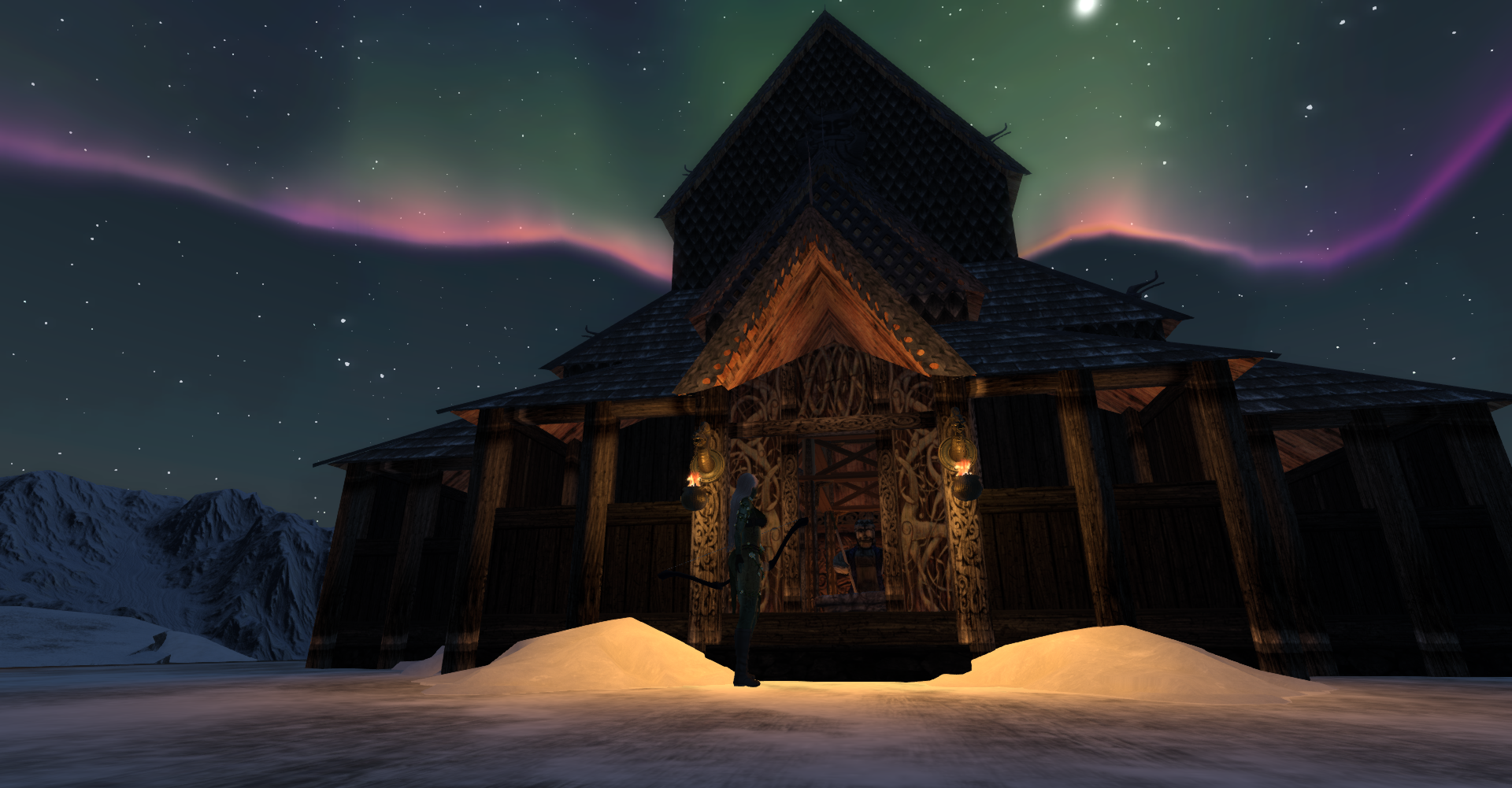 Inside the temple she finds evidence of rituals and sacrifice, but these are not the usual practices of worshiping nature and beings such as herself, as could be found at the stones further down the mountain.

These were darker works, the fools had evidently heard of crops being raised artificially out of season to the South and thought this was how it was done.

With her bow she knock everything off the Altar in anger at their foolishness. Picking up a collection of scrolls featuring illustrations similar to the altar goods she glances at them in surprise. These are old, so very old but she recognised them. The fae races had worked hard to destroy all copies of this arcane knowledge, in order to preserve the balance of nature. She knows what she must do.

Waiting at the doorway of the temple, to get some warmth from their fires, she is impatient until dawn. She was going to need all the help from nature she could get for what she had in mind. As the sun rises she takes a bud from the vines encirling her body and places it into a shallow hole she was able to make in the frozen earth with the end of her bow. Standing back she raises her arms and chants quietly calling on the dormant natural world around her. 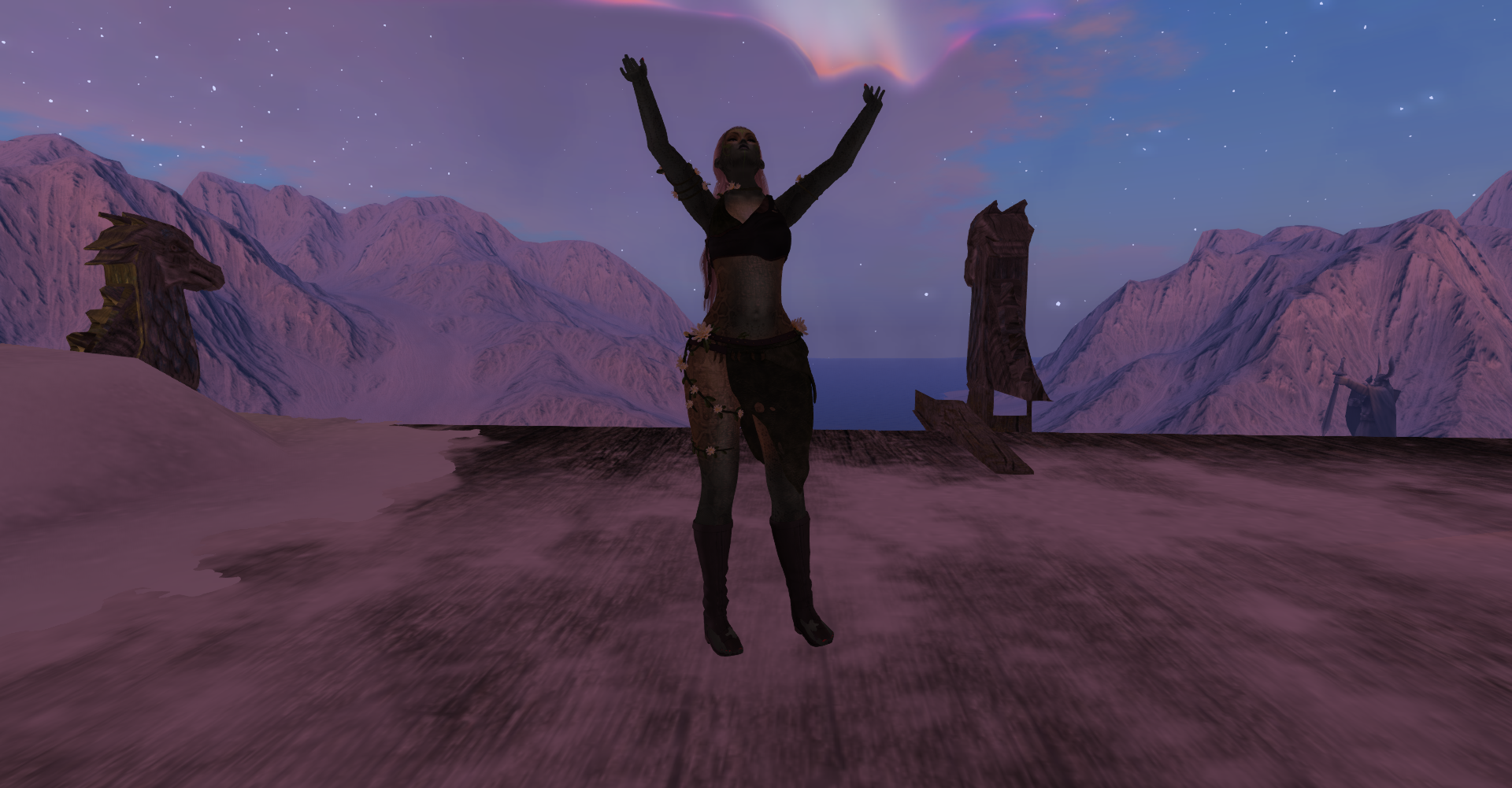 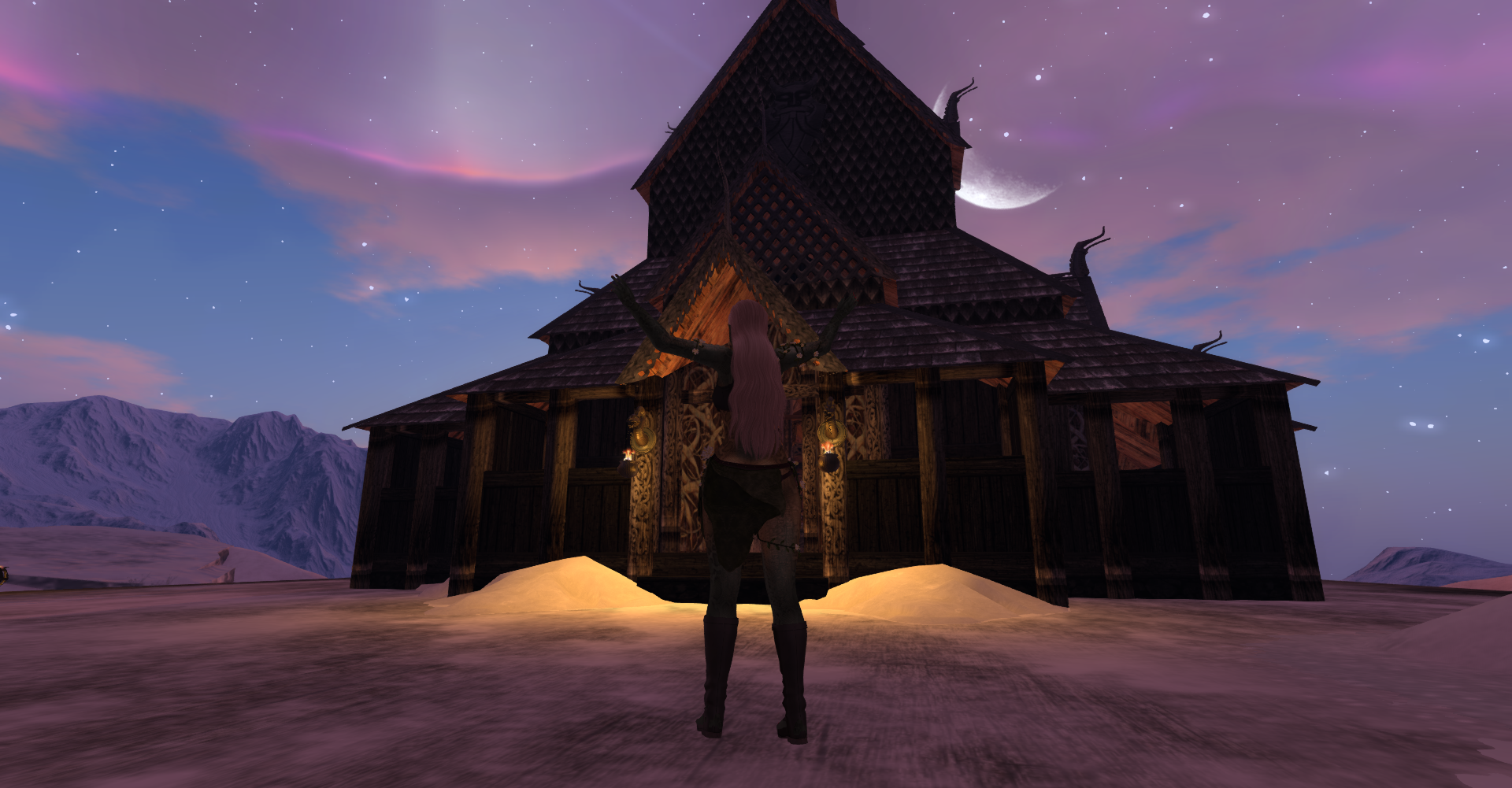 Directing the energy into the barely buried bud she encourages it to grow and expand until the building is encased in leaves, the shoots running up between the stones of the building like roots through foundations of a house and pries them apart. 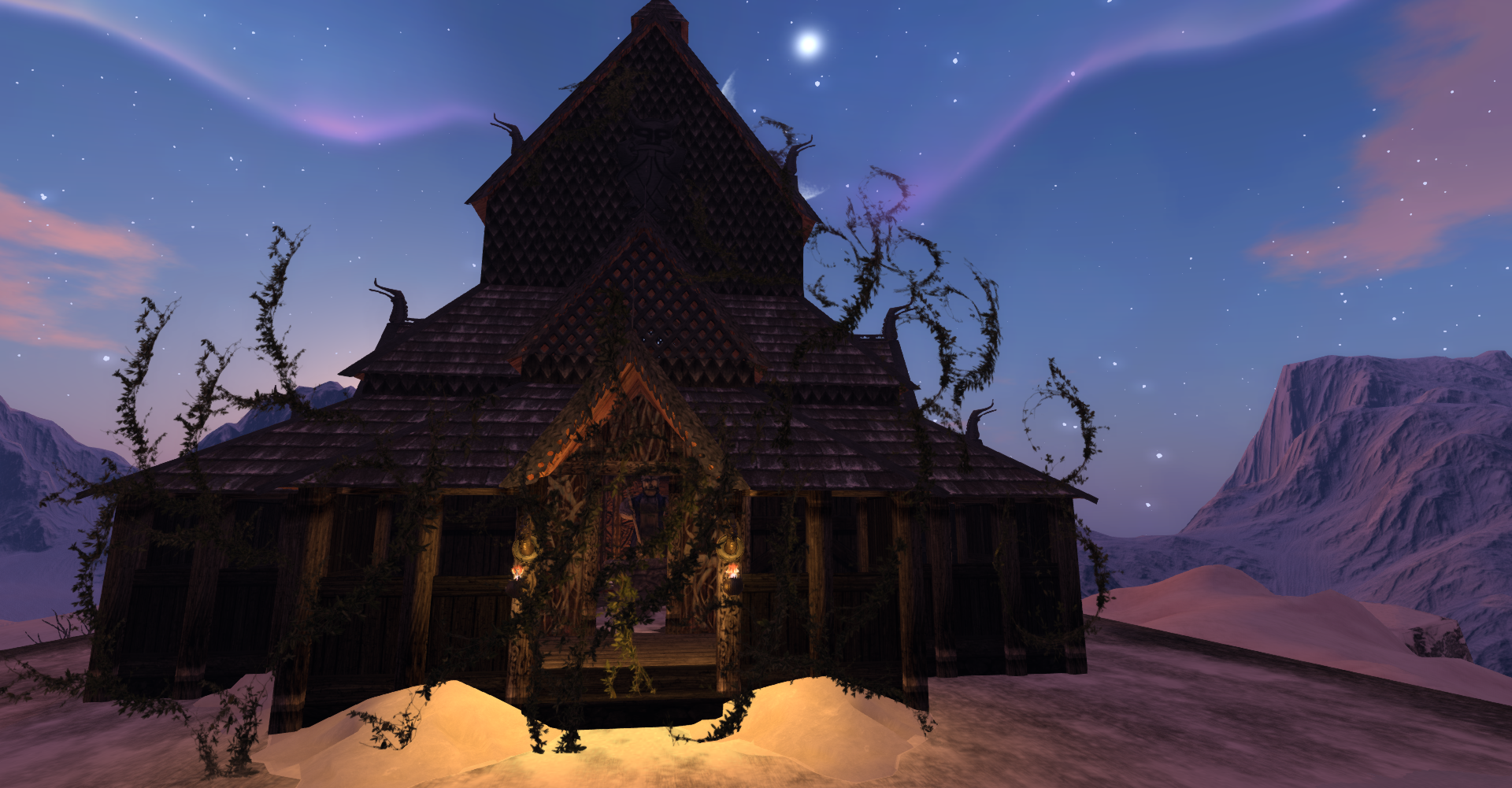 It takes time and a lot of effort but eventually the roots demolish the building entirely into rubble. The shoots recede and combine into a single living thing…a blossoming tree. They wanted out-of-season plants, this is what they shall get. 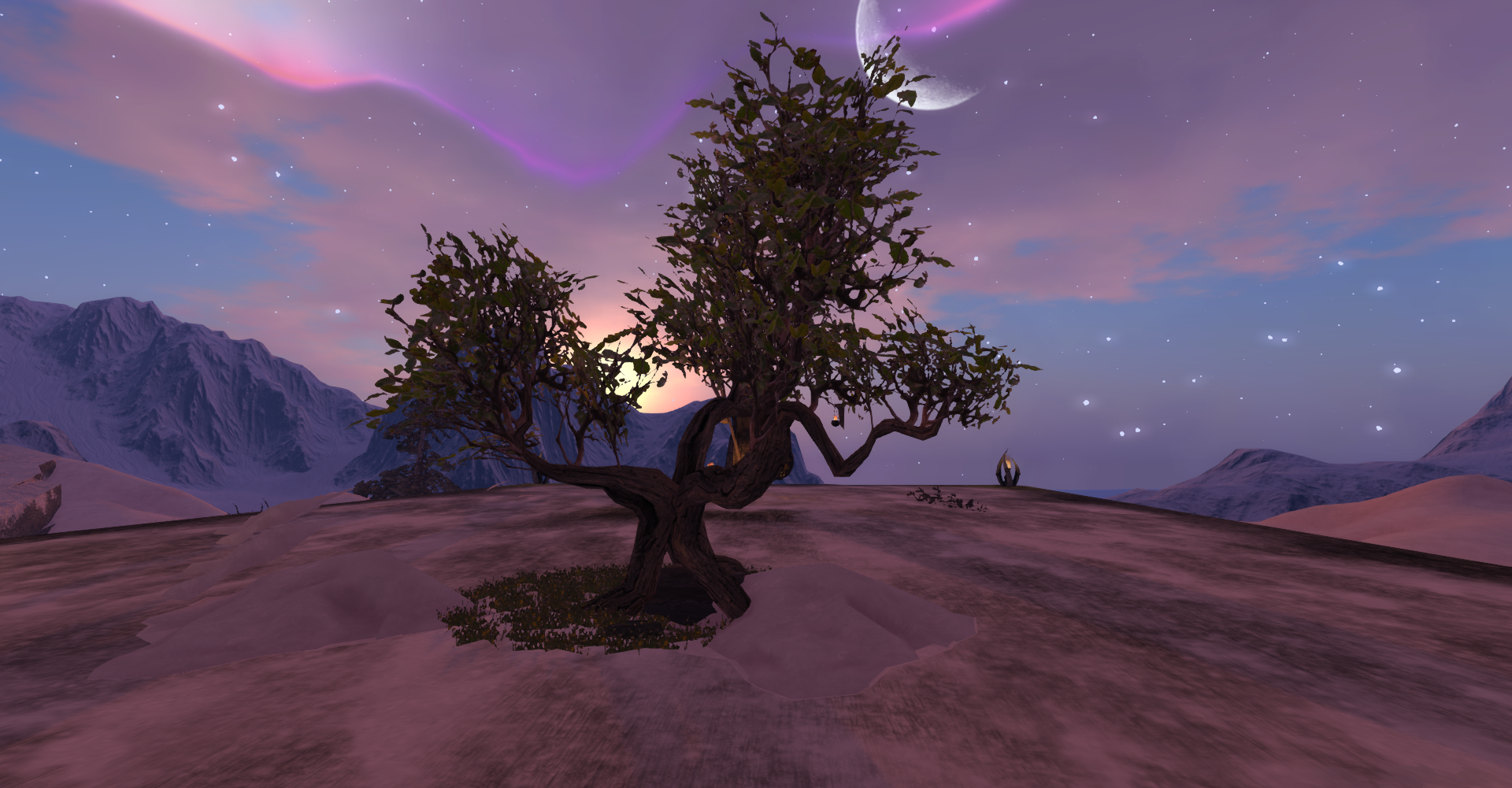 Exhausted and barely able to stand she returns to the forest to hibernate until Spring actually comes.

When I had been told by Camilla Runo the builder of Vargsangen that it had returned I was excited and just had to go explore! I thought I would wear something warm and furry like my previous post. But once I collect this New Year’s special skin from Fallen Gods that completely changed, a Dryad post was in order. I had earlier been out for a walk (in the odd world of Real Life) and I saw daffodils sprouting, which doesn’t usually happen for another couple of months and that gave me an idea, to which I added a fantasy twist.

The build is expected to close at the end of January 2022 so get over and check it out. Here’s a few extra snaps that didn’t fit into the story: 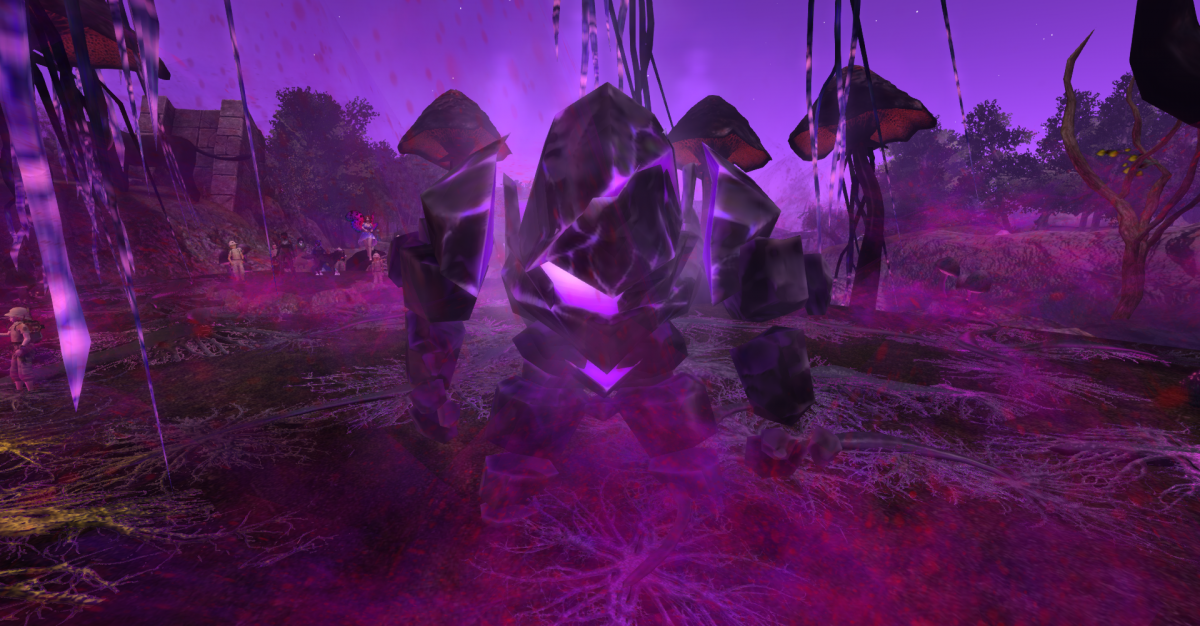 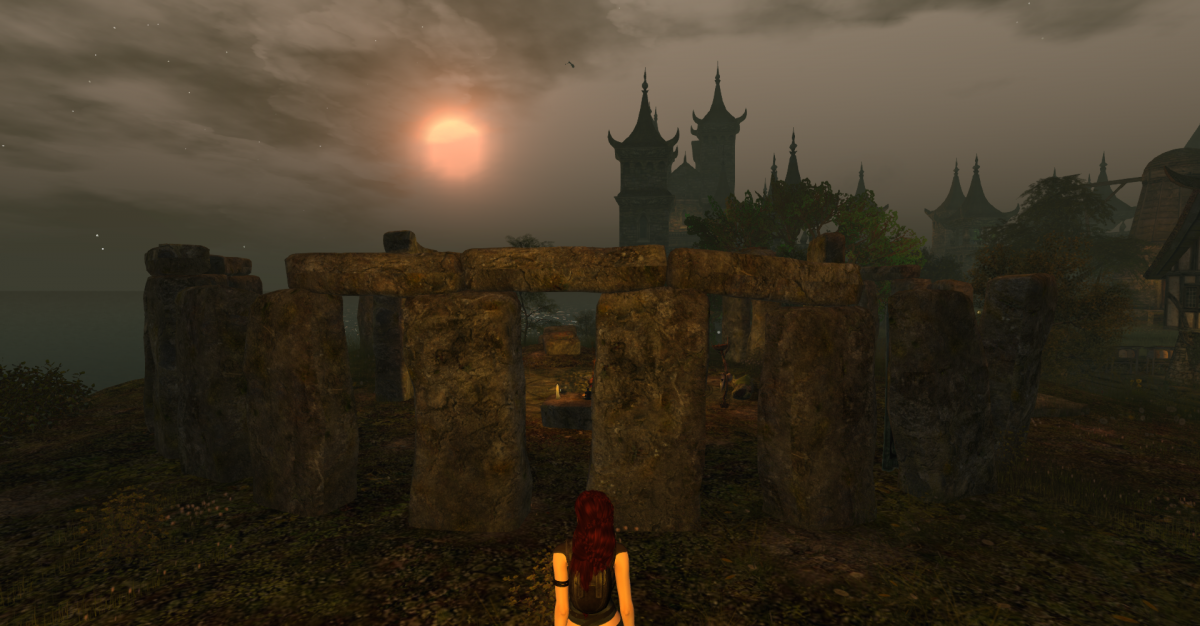 At the end of my last post about Golgothica I mentioned returning to check out the chapel and the windmill. Well..I’ve done that and wow there was so much I missed out!

First I had a glance inside the suspected tavern, lovely little place, more on that later..first the chapel.

You have to head down the side of the tavern that lets you reach a bridge across to the rather spooky-looking place. 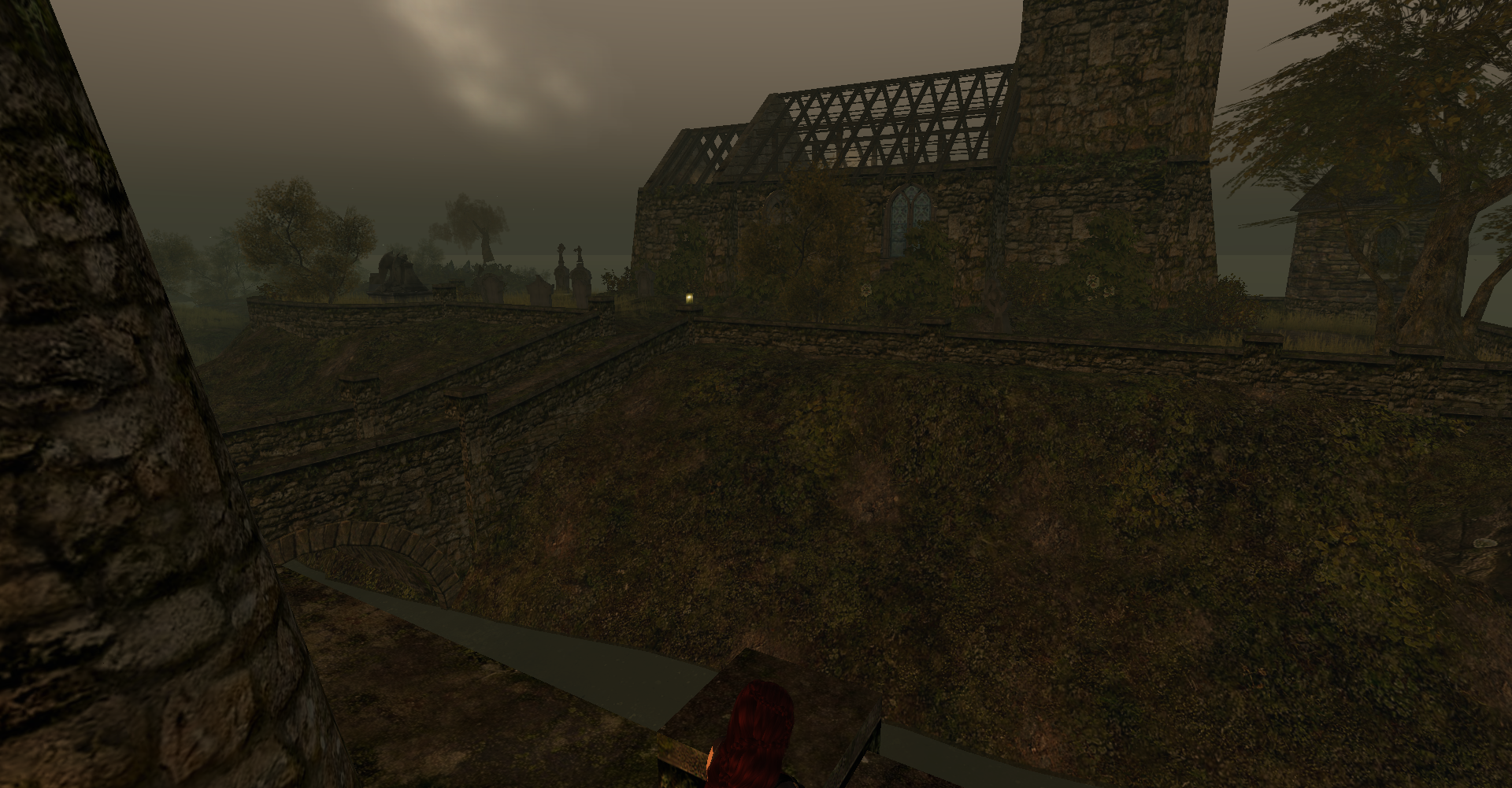 Crooked headstones are all around as you enter, a brief glance at a few before finding the entrance to the building at the near end. 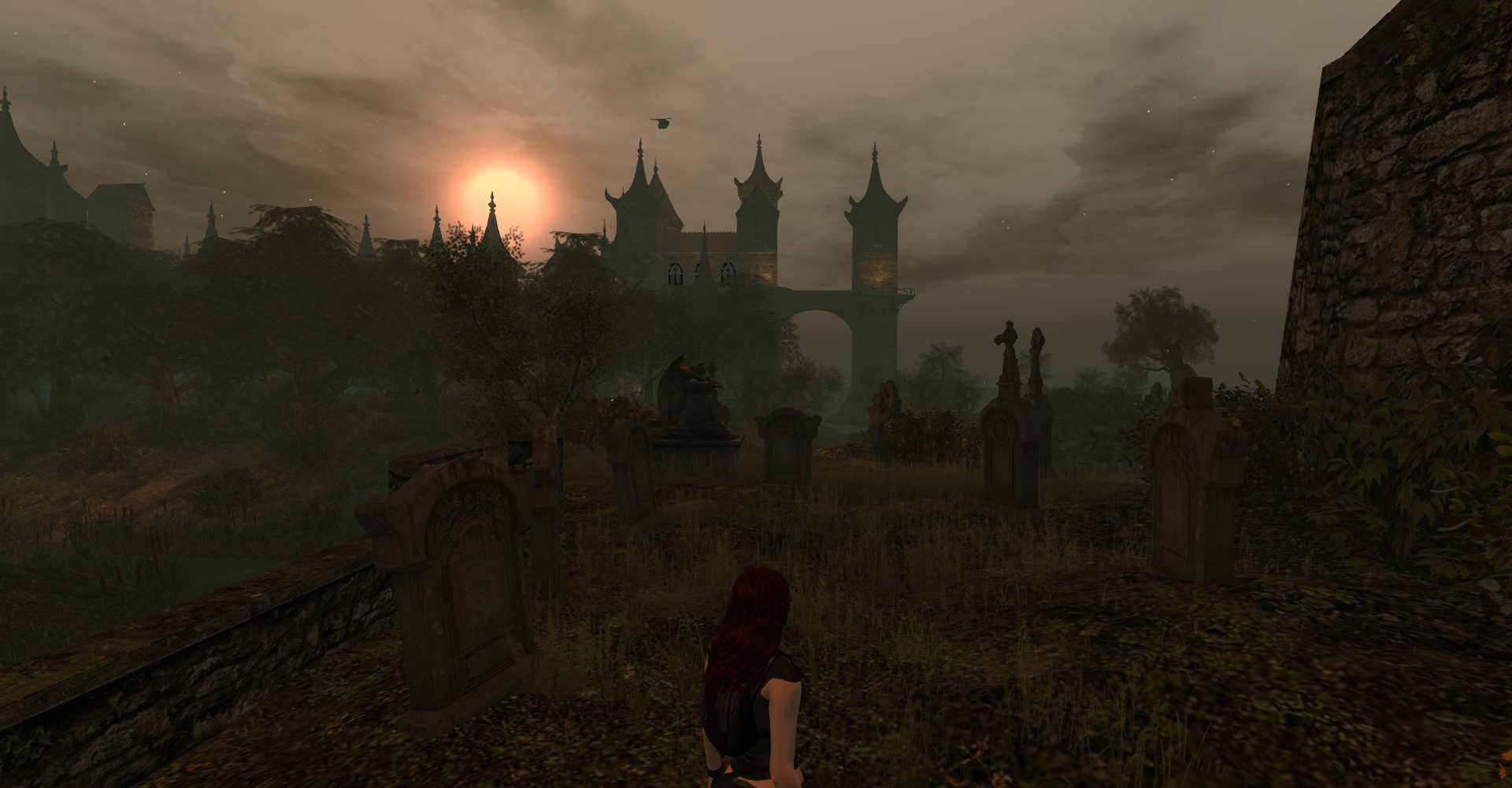 Entering the Chapel the roof as fallen in which lets in beautiful shafts of light, making it feel quite serene. 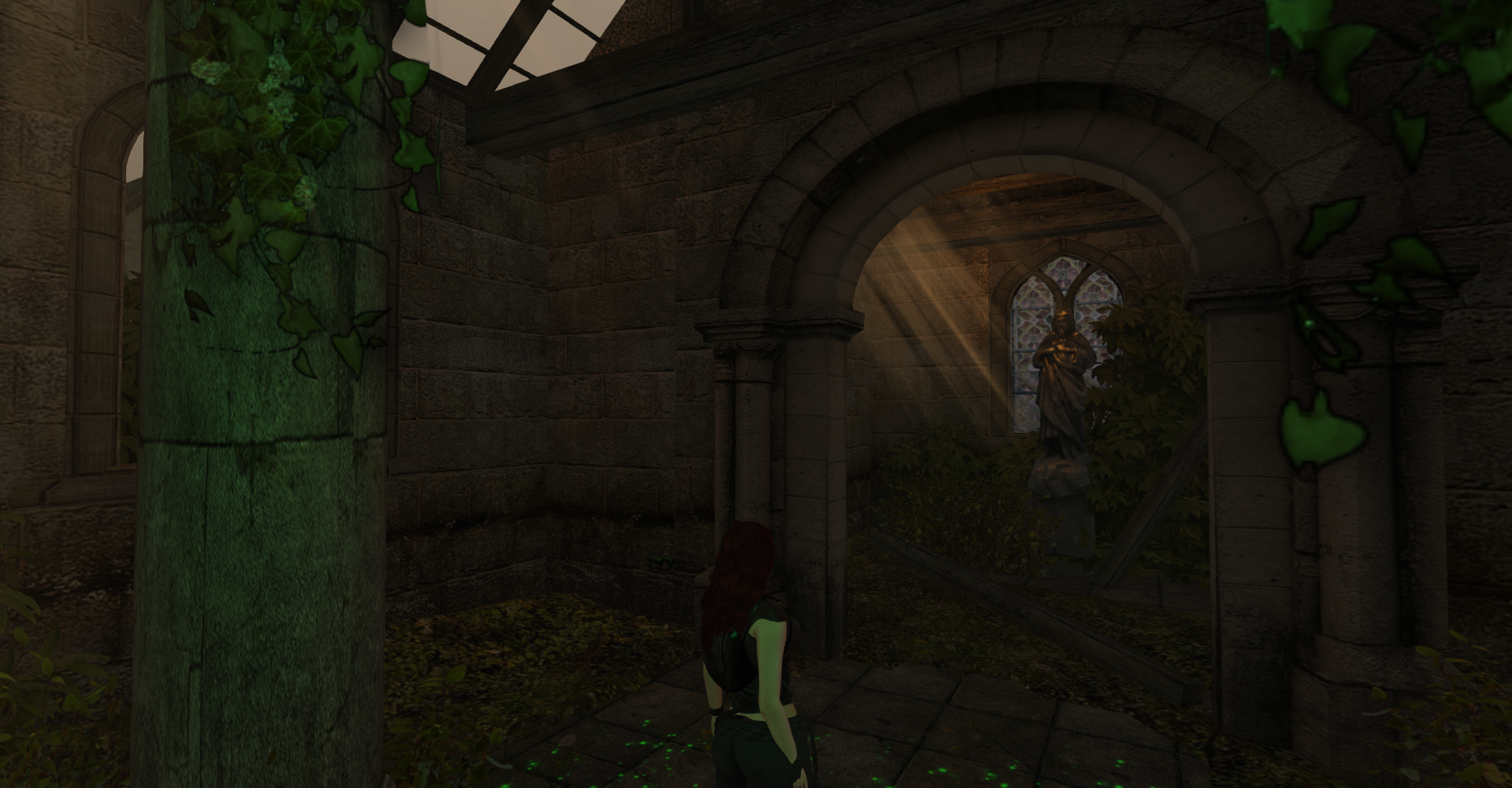 Heading back the way I came between the houses I come across what would appear to be the front entrance to the tavern and take a better look. It’s small but ideally cozy for a small community to socialize in the warm together.

Carrying on through the town I come across some wagons, it appears there are gypsies are in town, or is it maybe a permanent arrangement? 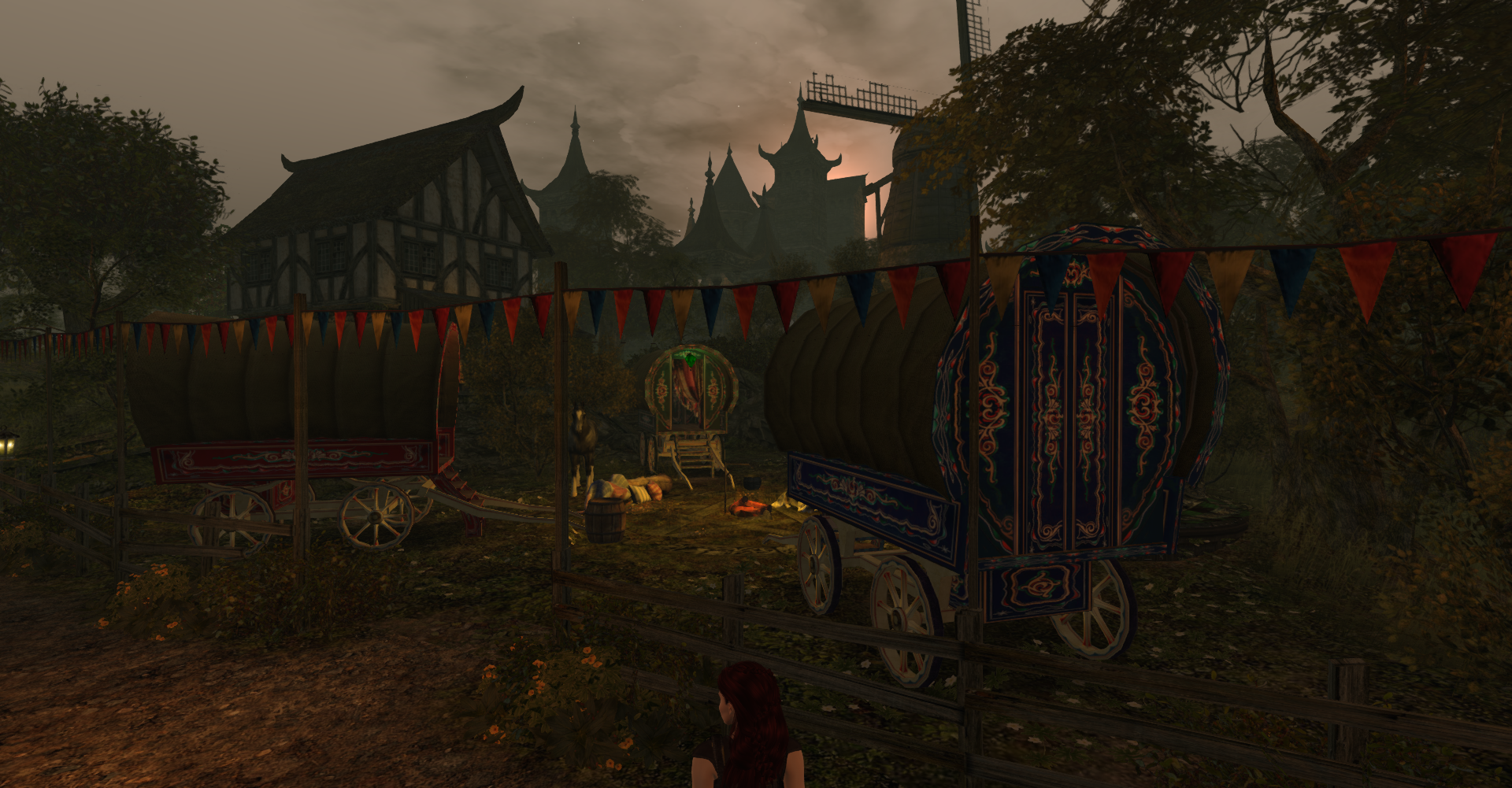 In the distance I’m expecting to see the windmill that I’d seen from walls of the castle on my last visit, but no. What I see instead is the entrance pillars of a stone circle! 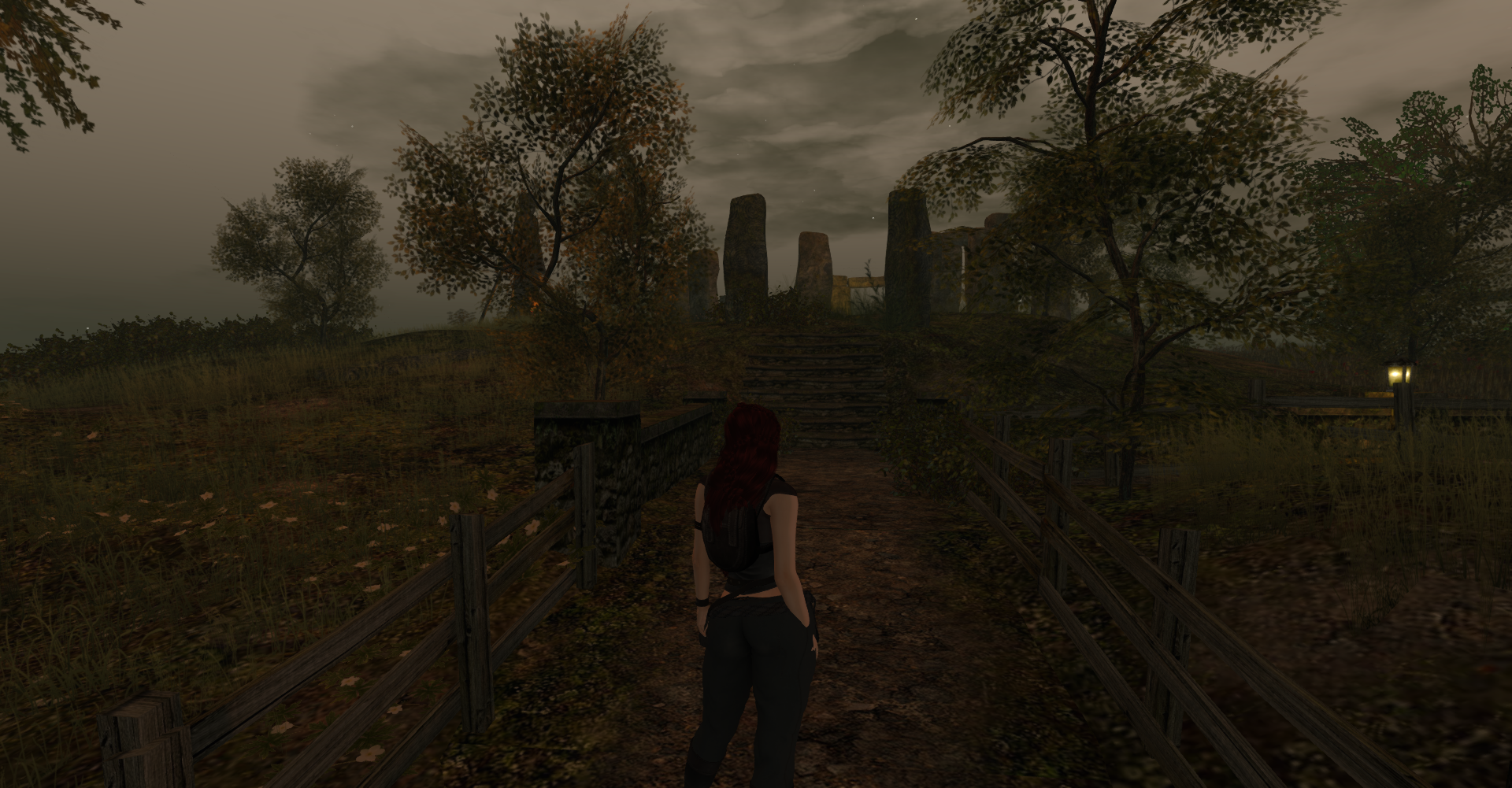 I hasten along and something else catches my eye beyond the stones on the coast side, which is the appropriate place for a Wickerman. 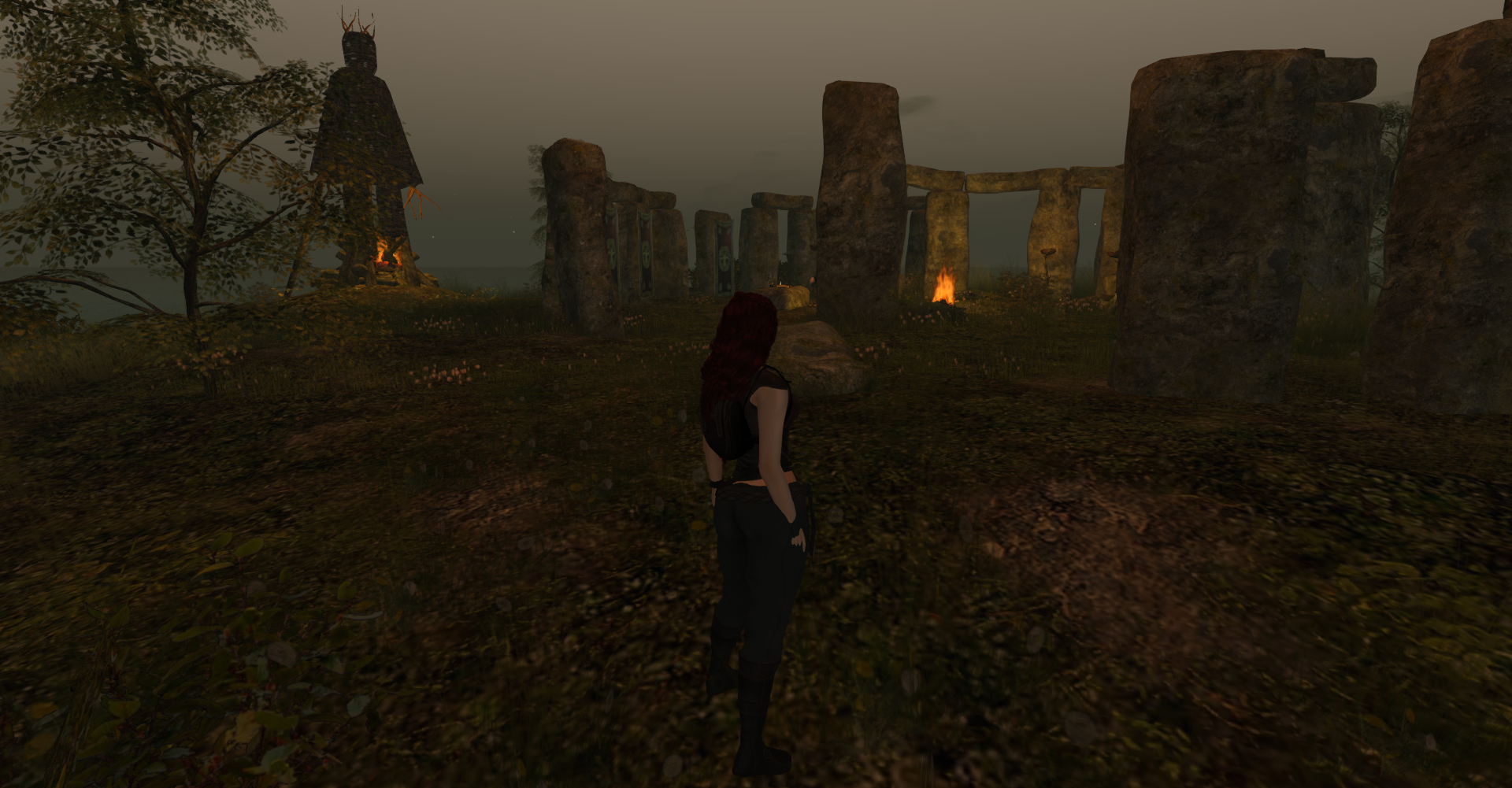 The reason I’m so excited? One of my favourite films is The Wickerman (1973 original obviously,not that crap remake that doesn’t even deserve the name from 2006.) 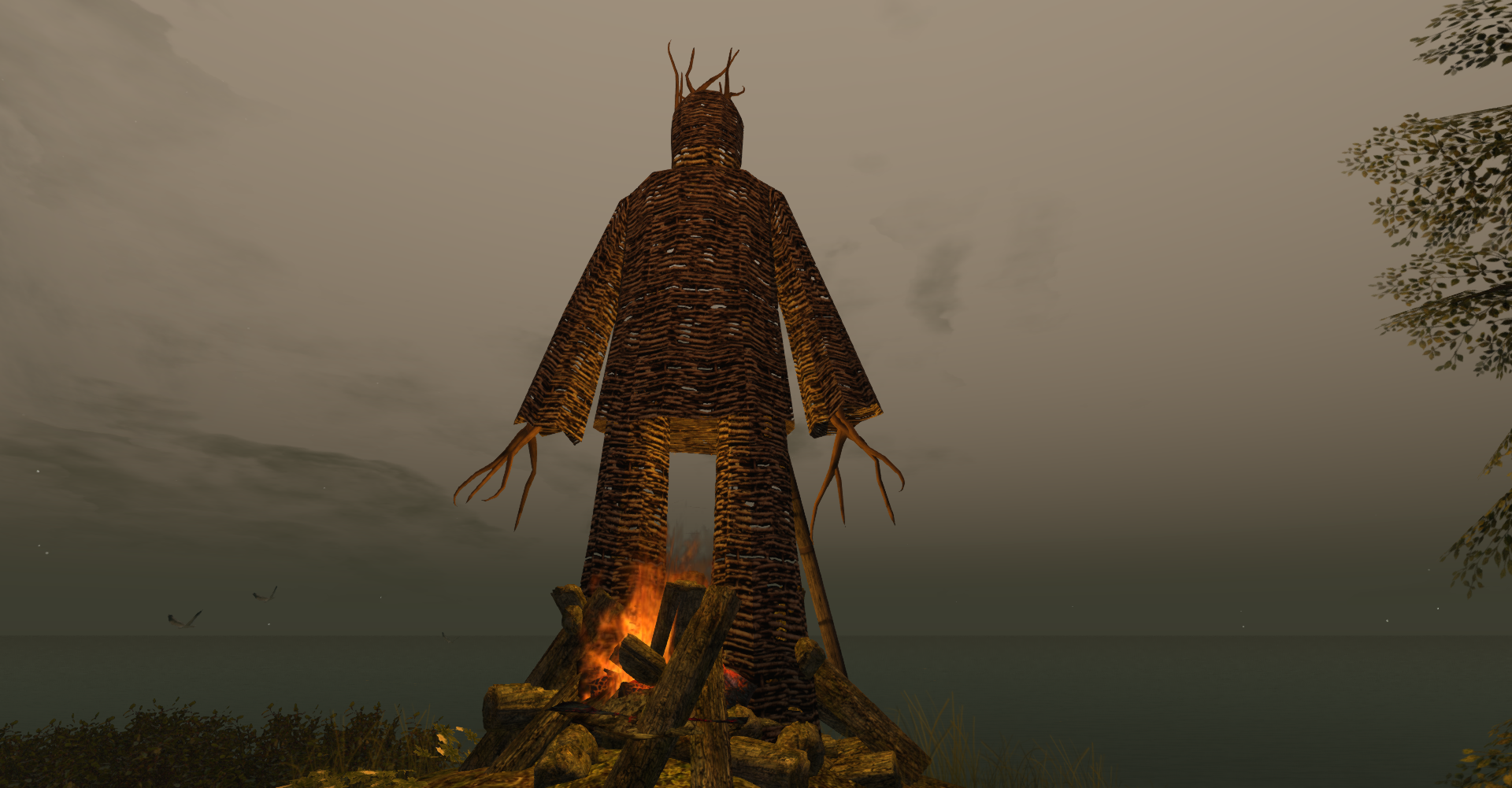 I re-enter the stone circle to try out the ritual animations the altar there has to offer, before heading out the far side in search of the windmill.

When I found it though it was a little bit of a shock inside. It’s suitably atmospheric, with some great props, enough to give me an uneasy feeling to get out.

I’m no stranger to folks putting pentagrams upside down and stuff, they think it’s cool and scary (this is no criticism of the place,but of a stereotype portrayed in films), it’s fitting for a build like this and plays to the horror movie stereotype well. I stepped into the windmill and realised I’d inadvertently stepped right into the middle of a chalked circle on the floor. Something never to be taken lightly, so I made a prompt exit.

As I emerge I see a large statue of a werewolf attacking its victim. This feels a little out of place for some reason, not seeing any other references to such so far. Passing the statue I step into the light of a fire, in the middle of the gypsy camp from the opposite side.

While I look around I again realise I’m in the middle of something, this time a massive pentagram. Not so worrying as a circle, provided its oriented correctly and I didn’t get any bad vibes off this one. 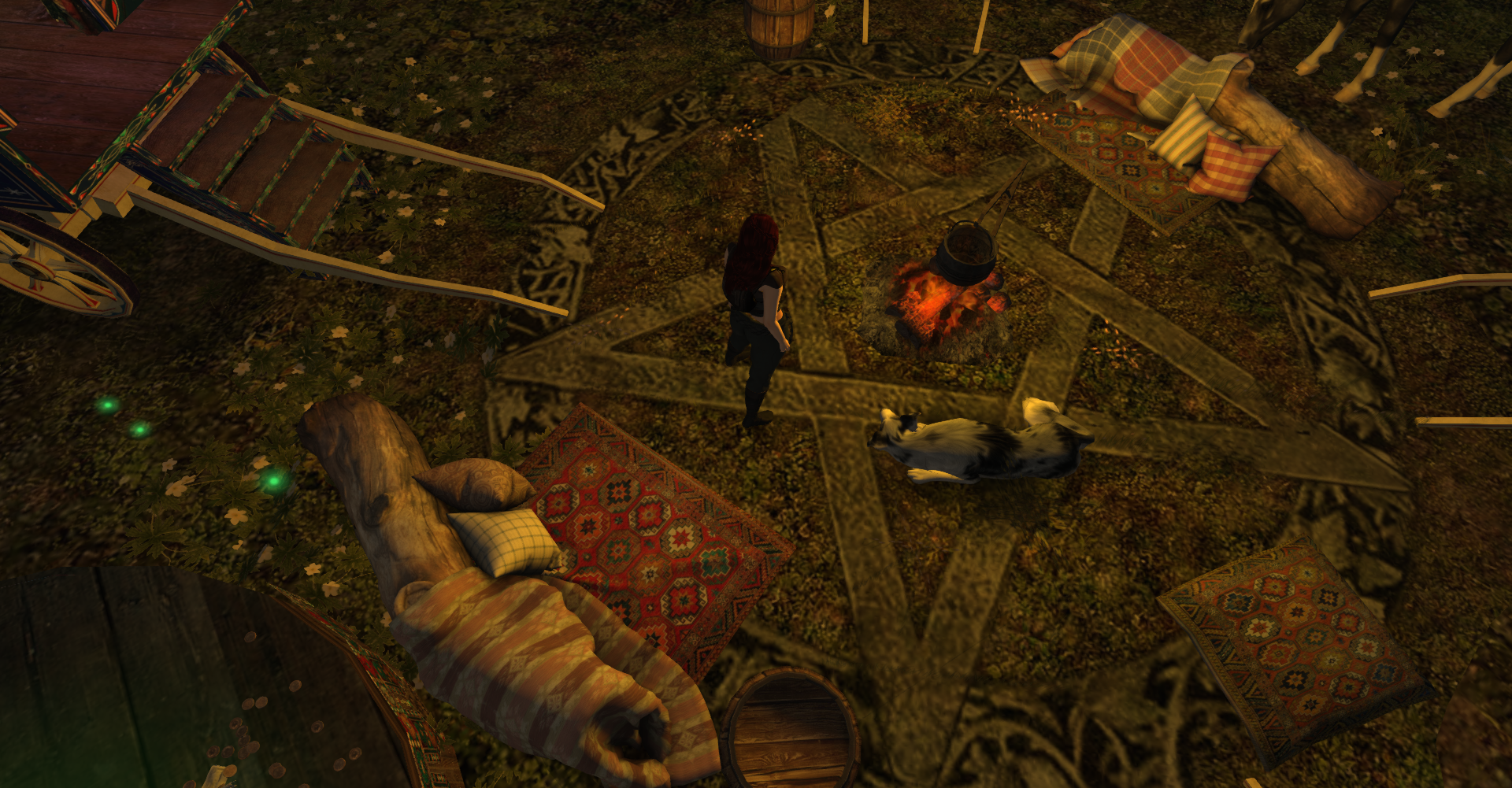 There’s also some fun things in the tents, including a gypsy dance one.. 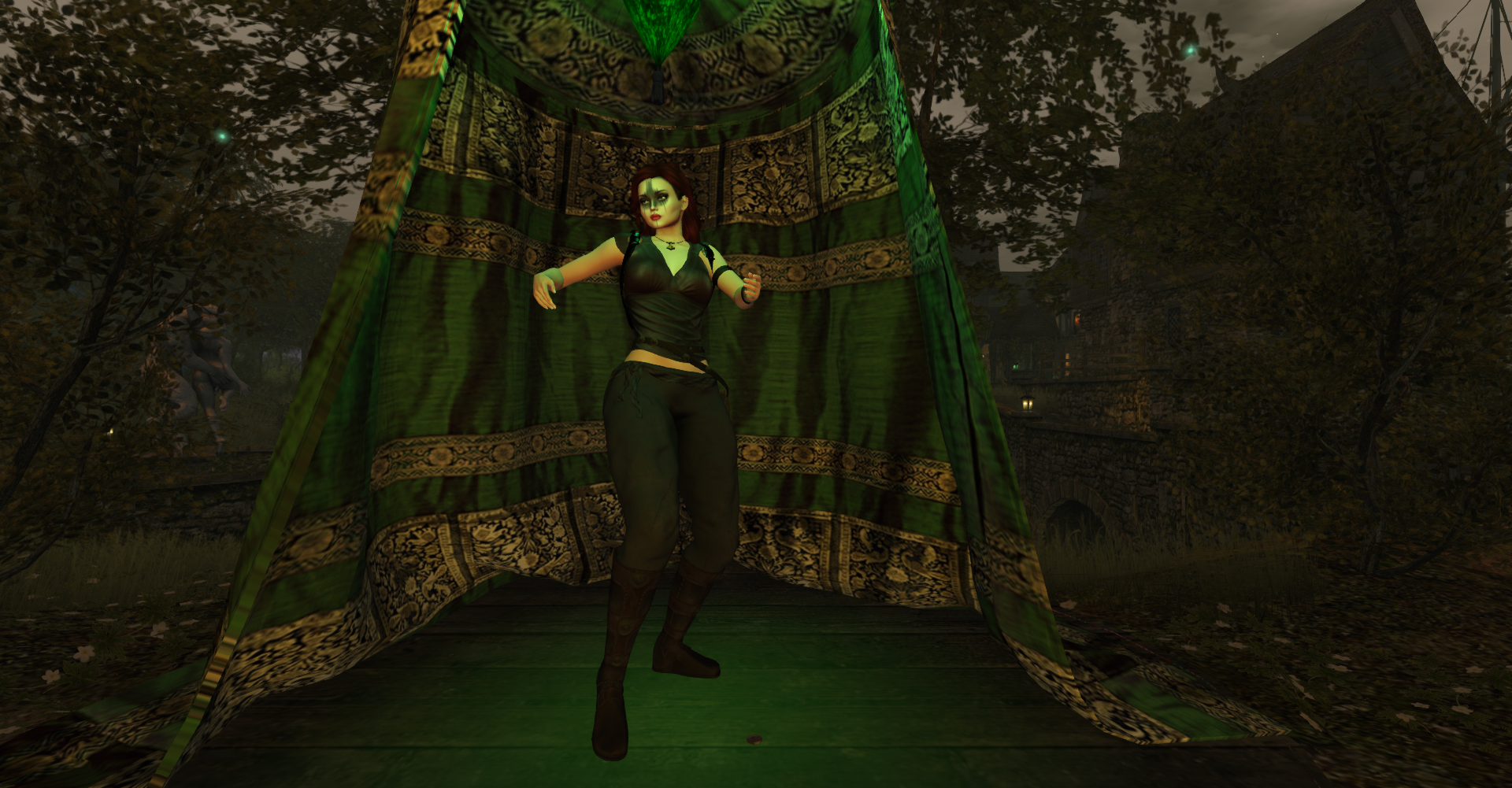 After my trekking around I felt in need of a brief rest so I headed to the windswept beach and walked for a short distance before I found a cozy campfire and a lovely view of the sea. 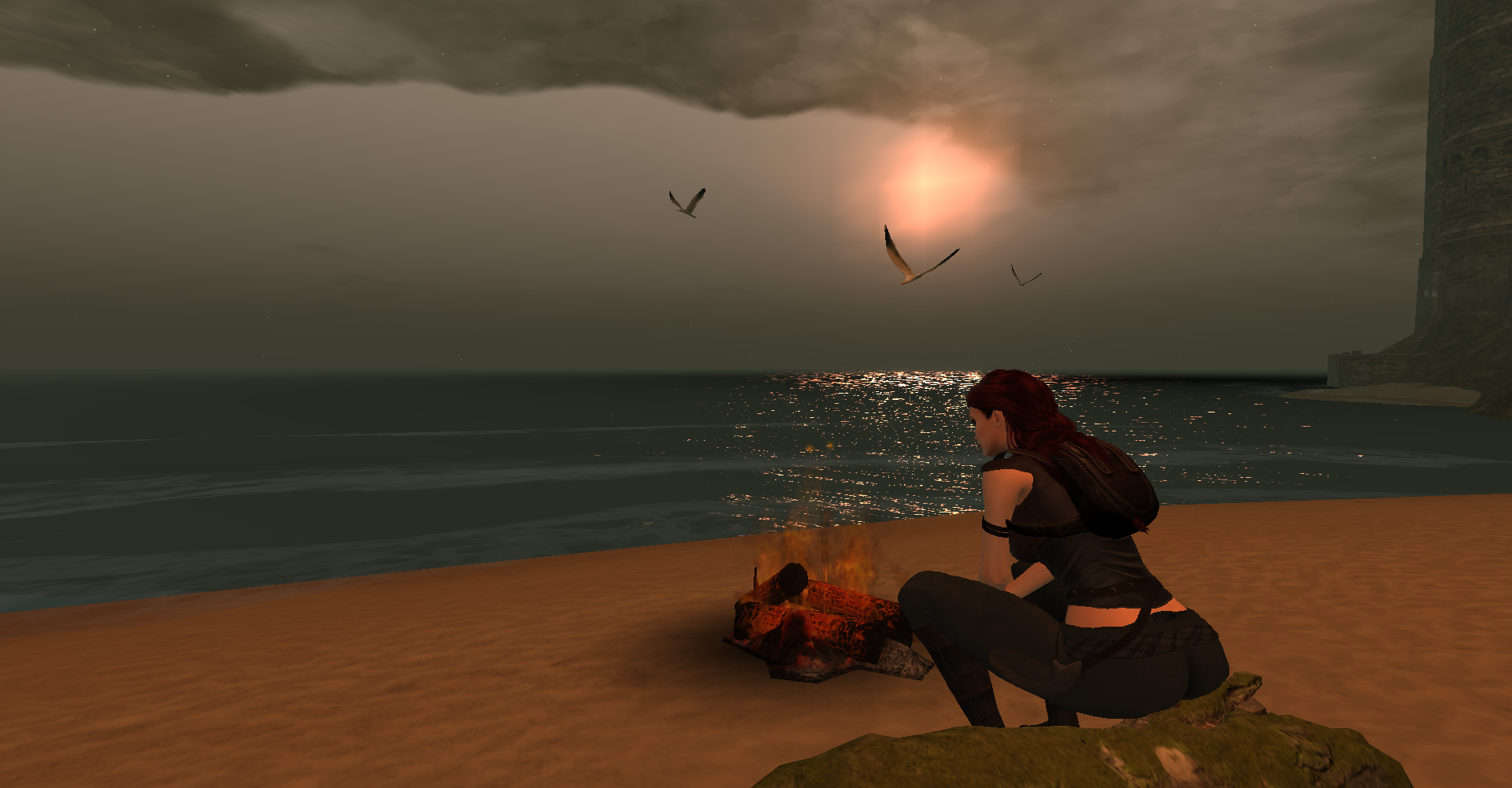 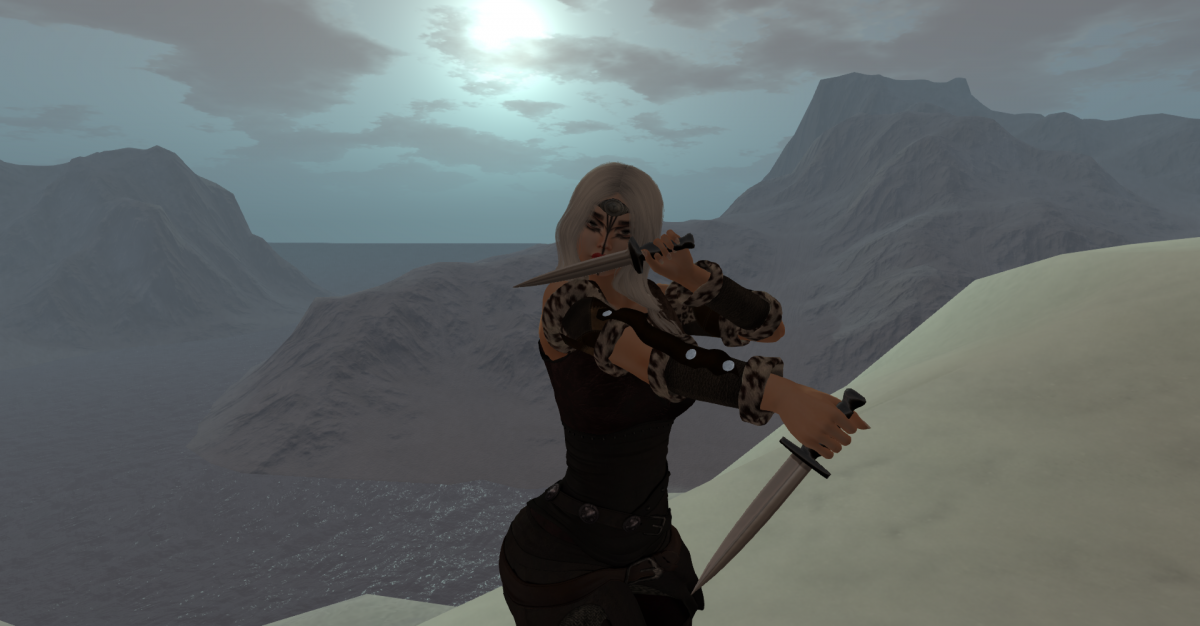 Taking a walk up onto the snowy hilltop and doing some training exercises was very relaxing for her, helped clear her head. The setting sun and moonrise gave such a beautiful light to move gracefully in, the brisk wind chill, but refreshing. Although little did she know her exercise would have a more brutal ending than usual.

As she descended the slope toward the village she heard snarling and animal cries of distress. She drew her knives again wishing perhaps she should have brought something more substantial, but hadn’t expected to need it.

She followed the sounds into the undergrowth to find a pair of wolves attacking a stag, one already down. She curses, the wolves shouldn’t be getting so close to the village. 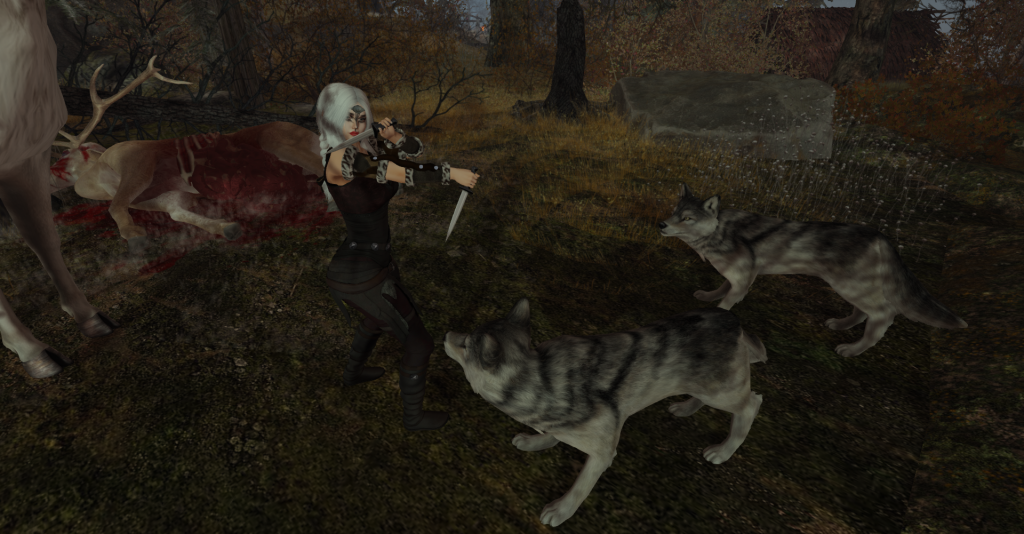 A brief scuffle left one dead wolf and the other on the run. She turns to check on the stag and is relieved to finds it gone. There’s no blood trail on the ground, so thankfully it can’t have been badly injured.

She glances at the bodies on the ground, she’d need some help shifting the deer carcass, so for now she picks up the wolf and heads back to the village. They’d have to have to gather a hunting party to track down the pack before fresh snow buried the tracks.