About the Blog
Most of my blogging is about places or events from the perspective of a new arrival. It’s about places and experiences in SecondLife, not shopping. However if an Event has lots of stuff I like then I might do a blog post about it. Examples being Fantasy Faire, Mainframe and Engine Room. Fantasy Faire is the biggest one,which I was an official Chronicler for in 2021 and was a blast.

Click over to my #Featured posts to see ones that made it onto the SecondLife Community Blog.

Ava has been in Second Life since March 2013 but my explorations weren’t so interesting. My inspiration for Ava was from a book by Claire Farrell, so her inworld persona leans to vampyric and gothic style.

Ava Delaney calls herself a hybrid—a living, breathing human who happens to have vampire poison running through her veins.(Thirst (Farrell, Claire. Ava Delaney #1)

One day in August 2016 a friend persuaded me to visit a Gorean RolePlay region. I ended up spending 18 months there as a tavern keeper (among other things) in SL Gor (GE) . 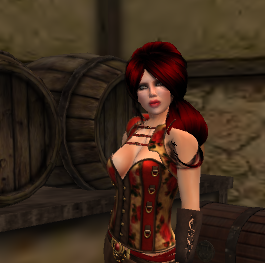 My time in SL Gor lead me into doing other types of RP, as well as exploring more of SL and I’m using this blog to share some of those experiences.

Ava’s typist has a real world Masters Degree in Education in Virtual Worlds from University of West of England.