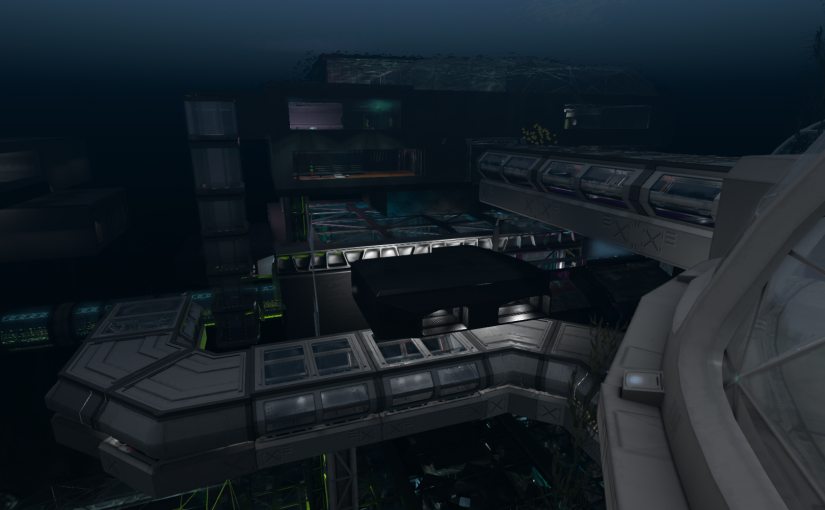 This place is an amazing deep sea sc-fi roleplay location. That description doesn’t do it justice at all. The premise is the surface becoming uninhabitable due to a deadly virus. So a deep sea leisure resort for the wealthiest of the wealthy (which hides a dodgy research facility below) is the last refuge of humanity. There are a few places/builds in SL that you can judge Sci-Fi builds against, in my opinion there are two main ones: Drune and the other is Hangars Liquides ( I really need to do an updated post on that place). The Varuna Project includes elements similar to both.

The upper levels are clean, clinical appearance of sci-fi film settings, similar to Hangars Liquides. The lower levels are very much like Drune, deteriorated, scruffy and graffitied under neon lights. The difference though is also the size of this area, with lots of winding tunnnels it feels bigger than Drune,despite the actual footprint being only slightly larger. The landing point is a large circular area with various info boards and signage. It felt simiar to my visit to New Frontiers, except much slicker and streamined. The place isn’t cluttered or overloading you with stuff to read or click on. 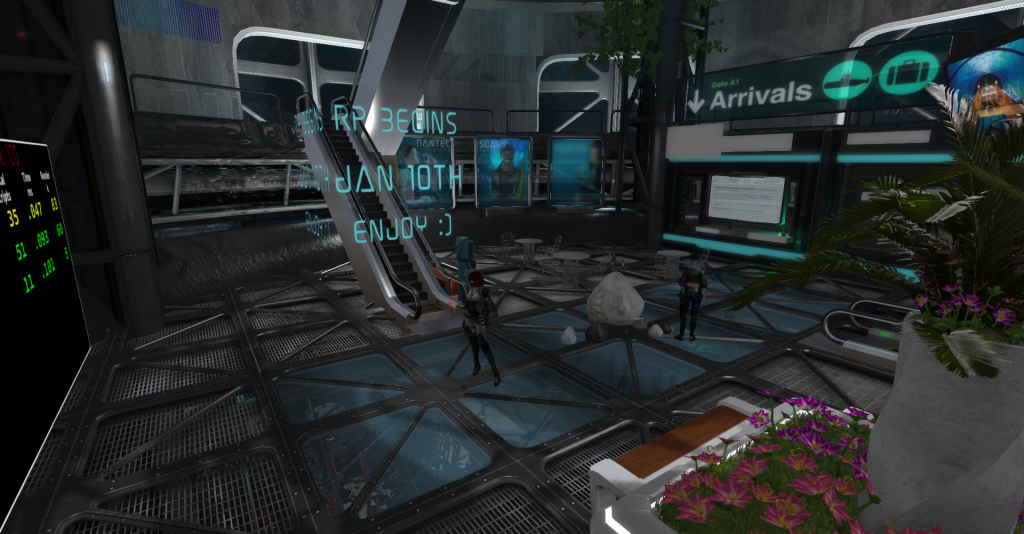 There are in fact just 3 boards to look at:

You’ll see in the first image there are large screens at the escalators saying “RP Begins January 10th. Enjoy 🙂 ” My visit was on 8th January, so no doubt these will have gone by the time of posting, there may also be other changes. You leave the area via a couple of escalators 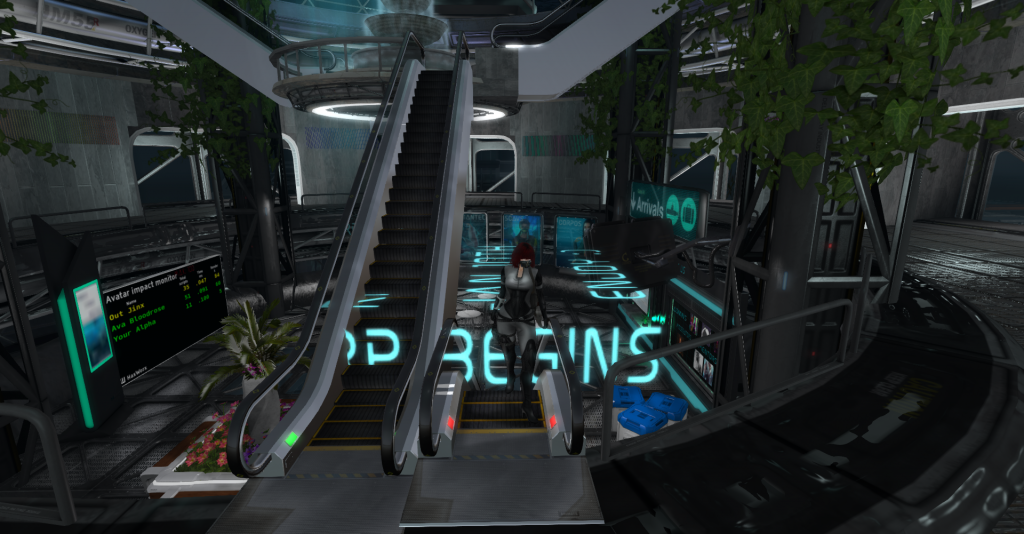 At the top of the first one I found a Sushi bar, but what’s more interesting is actually the windows on this level. 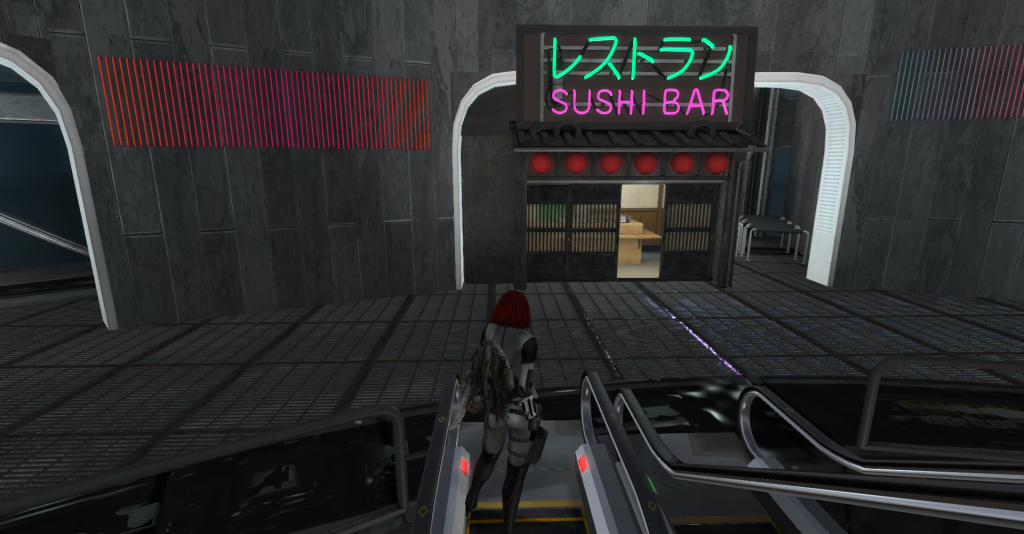 A glimpse out these windows gives you a glimpse of the scale of the place.

I took the escalator again up to the next level, which is ringed with corridors leading off it. 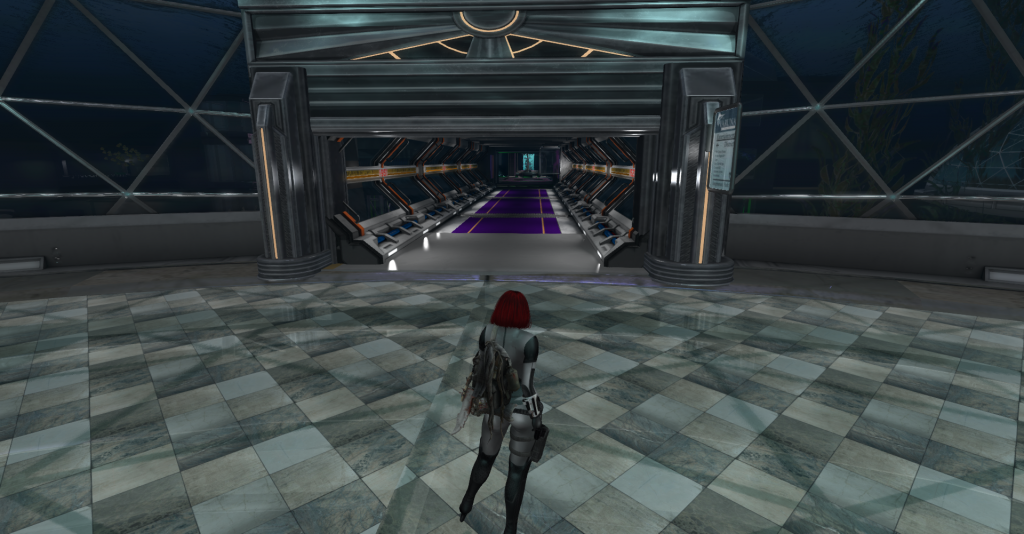 I thought I’d check them out one at a time, the first one was signposted “Entertainment District”.

Back to the main hub and down the next corridor, this on signposted “NANTEC: Solarium,Pharmasuticals Cybernetics”.

The next level down in the lift however is when things start to go from Strar Trek to Resident Evil, because it’s a lab.

At the back is another innocuous door that you wouldn’t look twice at, but to where it leads

Whereupon we find security scanners you have to pass through and cages..no more Mr Nice Scientist!

Through the corridor you navigate a couple of glass elevators until you find yourself here…where the place starts to feel much like Drune. 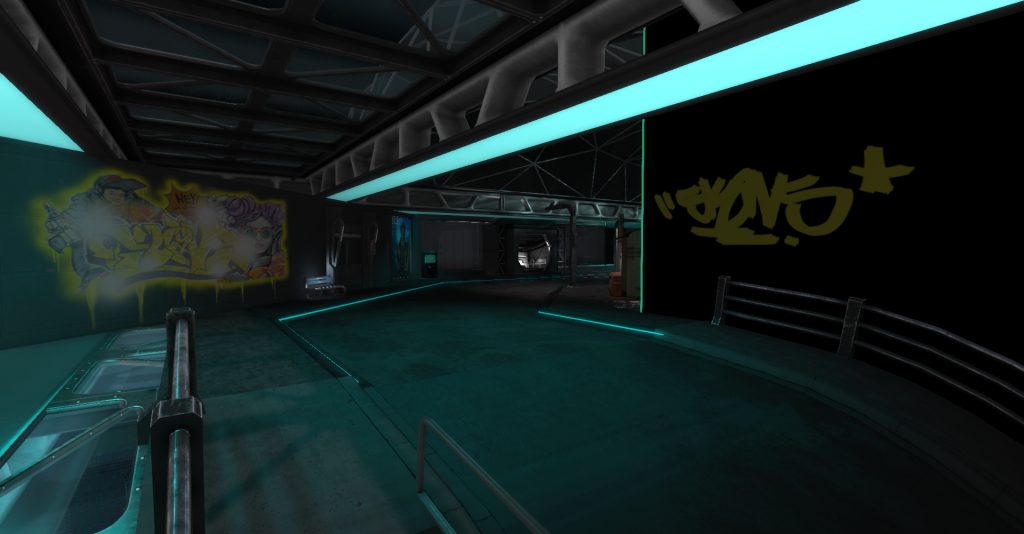 First thing you come to however is what looks to be a booth selling antique diving gear?

Then the place opens up to a series of walkways which I followed around to a surprise discovery.

I was rather surpised to see this down here, that when I turned around I fell off the walkway. Then got a little lost, exploring all the suboceanic environment of corridors and tunnels. You might ask why didn’t I just fly up or something? When I’m exploring a place I try to keep it real, as you would expected to do in a roleplay scenario.

There is lots to see here and I only explored 2 of the corridors off the main hub. Wandering around the place seemed to go on forever, elevators,tunnels and stairways leading into different areas of the seabed structures. This is intended as an organised roleplay region with related rules/codes of conduct. There are factions and clases of characters you can choose to play as. So if you want to RP here, definitely read the website.

Region Rating: Adult. Although most video games classed 15 are more graphic than this place. As with Last Chance City, it’s the potential RP and peoples actions  that might require the rating.

One thought on “The Varuna Project”