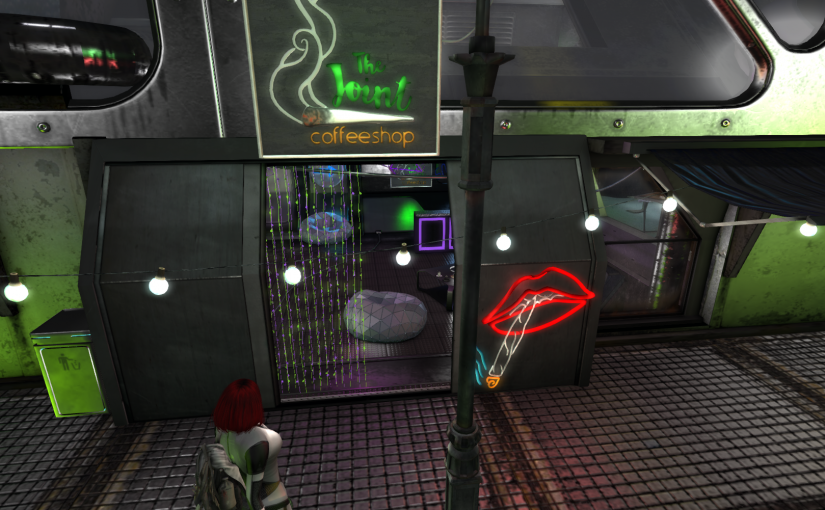 I decided to follow up on my post about The Varuna Project and explore the parts I missed out, I really didnt do some parts justice on my ast visit.

The main hub area has 4 exits and I only explored two, or at least thought I had, but seems I missed lots out.

Starting at the hub, 2 sets of escalators up from the landing point,the next exit along was according to a sign, “Inspiration Park” so I headed there. 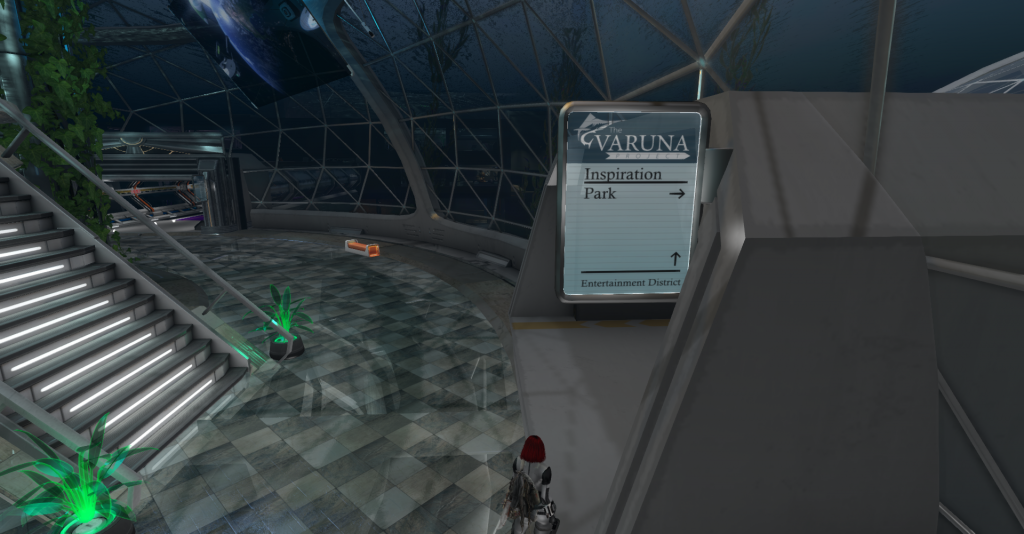 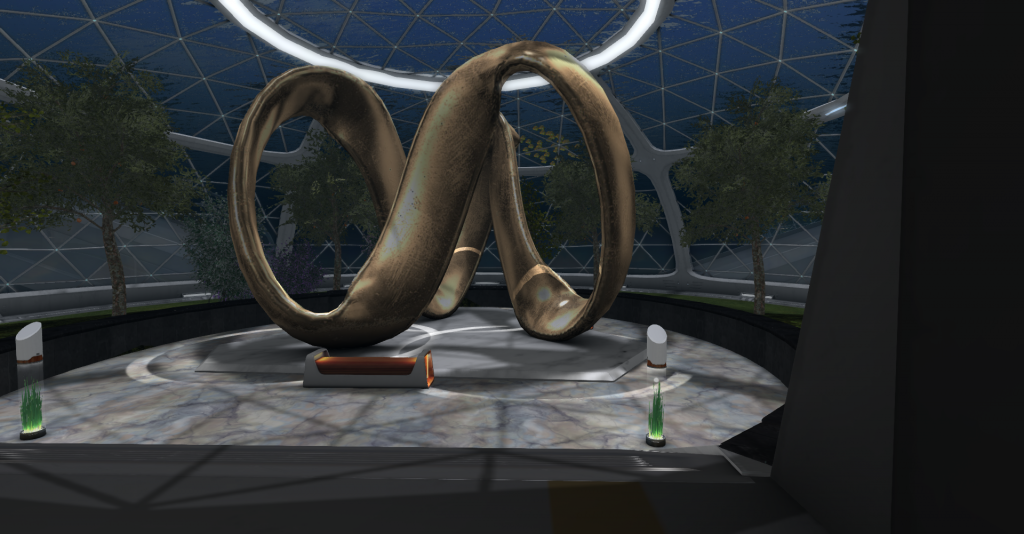 It’s an alcove with some seating and a couple of tree-like metal arches. Not particularly inspiring, I’d say it might be a nice quiet place to reflect or think. Reflection Park would suit better.

The 4th alcove round the curved wall wasn’t even signposted, but doesn’t really need it. It’s a transport point. 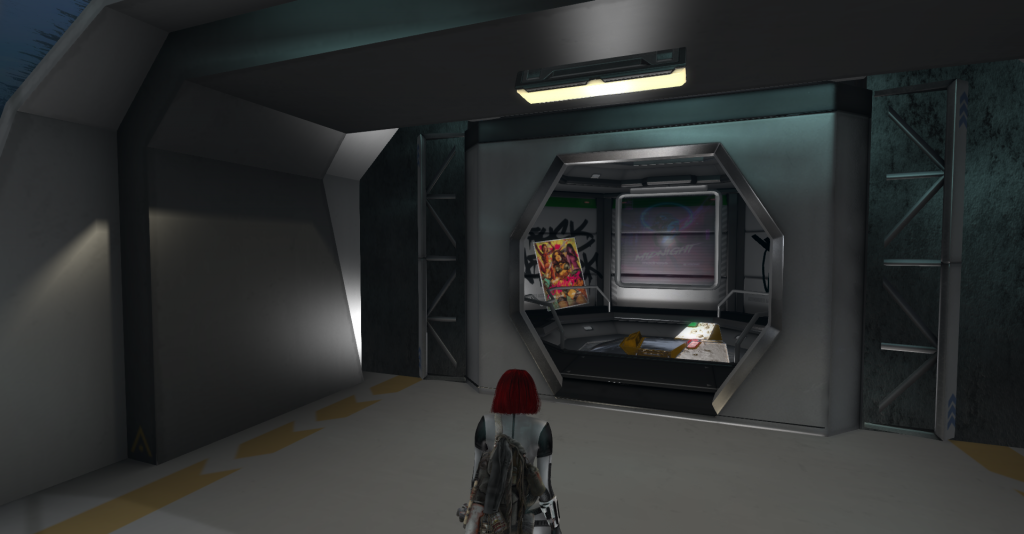 By the look of it the idea is a small shuttle/submersible that would carry you through tubes to different parts of the complex. In practical inworld terms, it’s a teleport system. 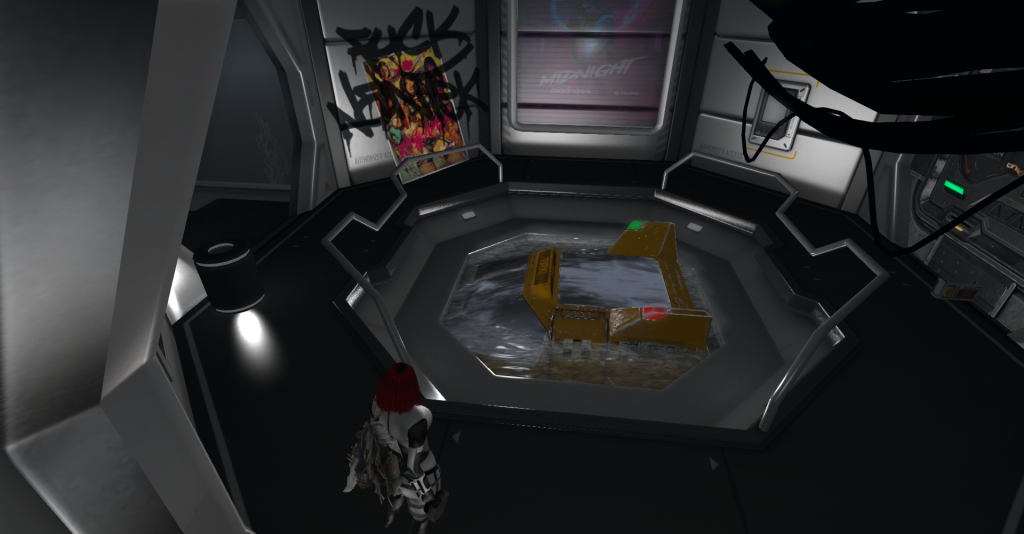 I tried each of the different destinations to see where I ended up.

The last place I tried was the Entertainment option, thinking I’d covered it already. How wrong I was!

I arrived and was presented with rubbish bags, literally piled up outside,so this is different.. 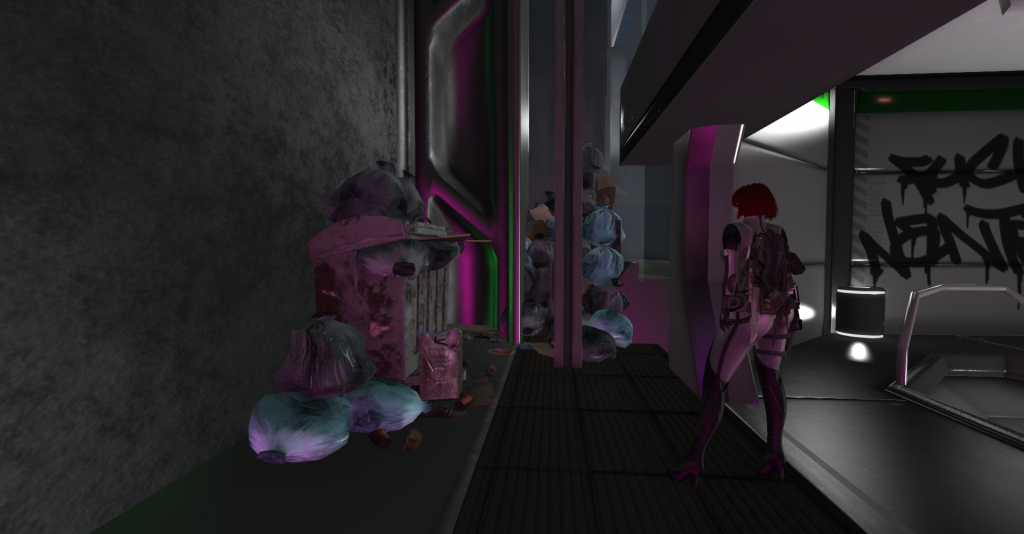 I stepped out into a tight corridor that appeared to dead end not far away. (The owner later commented to me “There no dead-ends at Varuna”.) 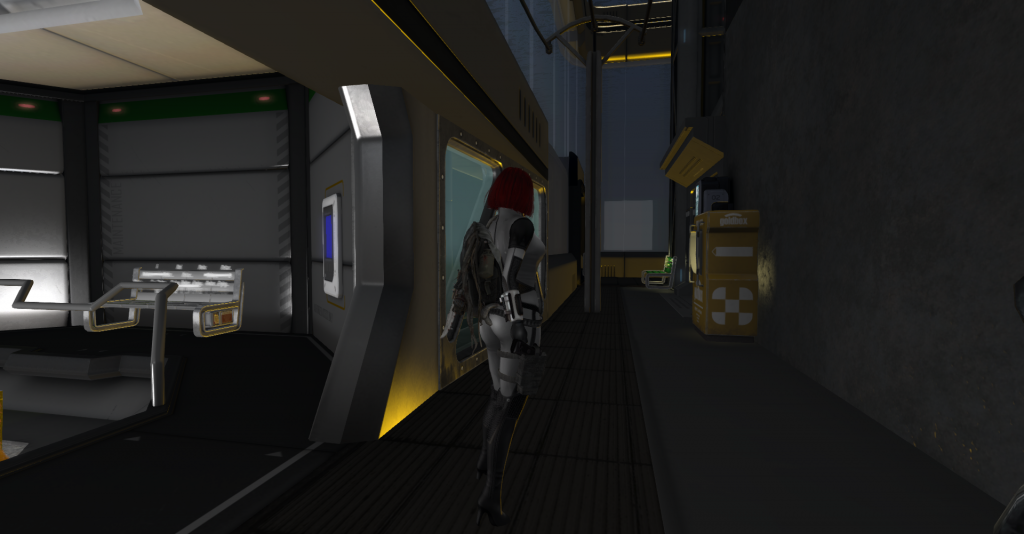 There was a lift door however, so I decended

Which took me down to the very lowest level, that I fell to previously and now know is called The Hollows. Since I’d already explored down there, I came straight back up.

When the door opened again I found an opening opposite, dark and featuring pink neon. 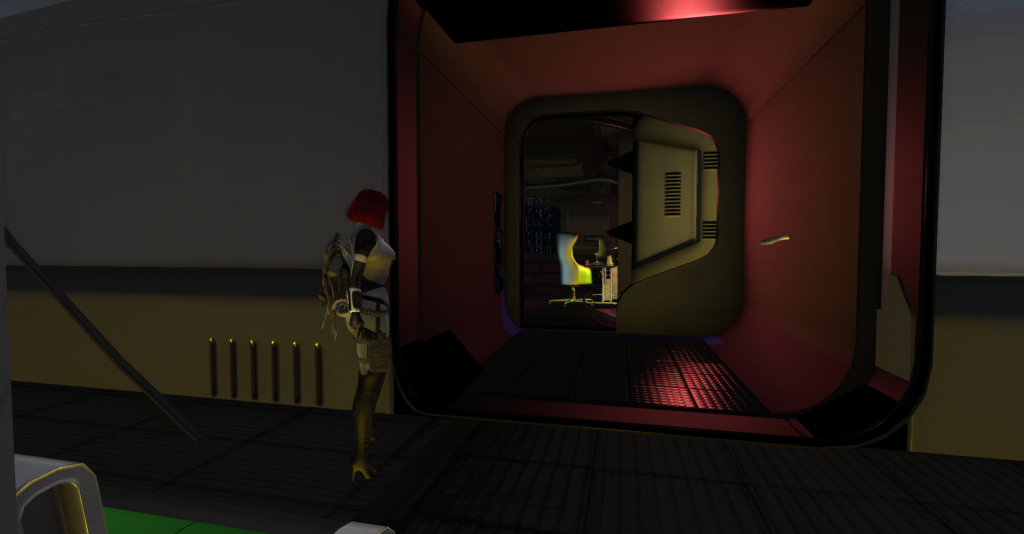 Clearly the corridor with rubbish bags wasn’t a dead end, it was a junction. I had a bit of an investigate, though pink neon is usually a bit of a clue, adult entertainment.

Coming out the continuing corridor that seemed much brighter and very promising. 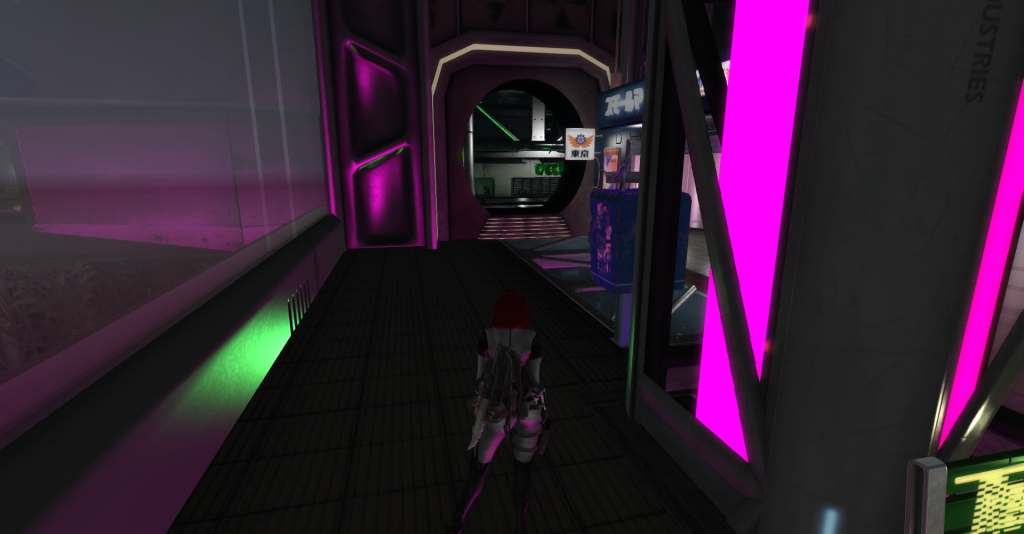 This corridor opens out into a rather large shopping-mall style area. 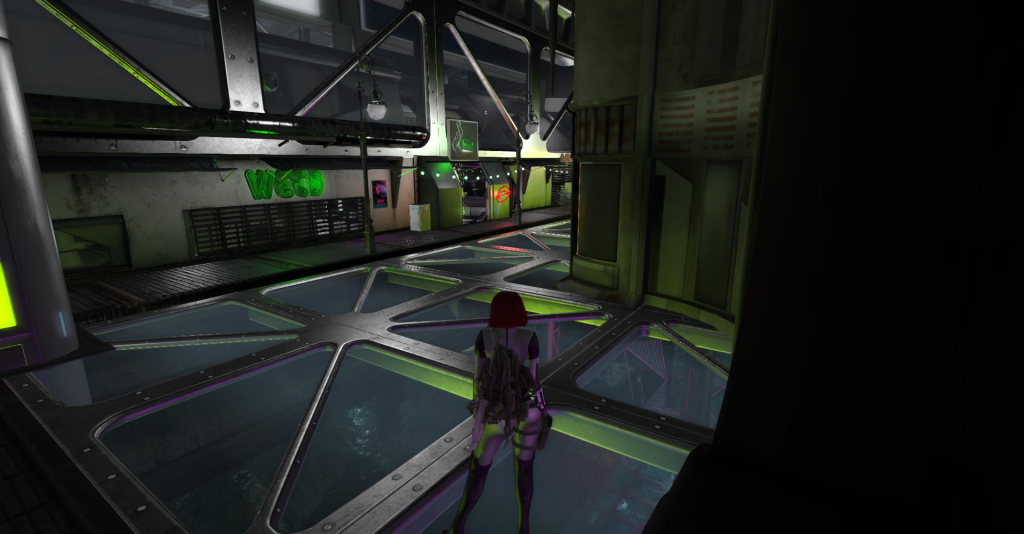 Across the main floor from me was a coffee shop called “The Joint”,  with a large green neon sign saying “WEED”. I’d suspect their cookies are rather moorish. 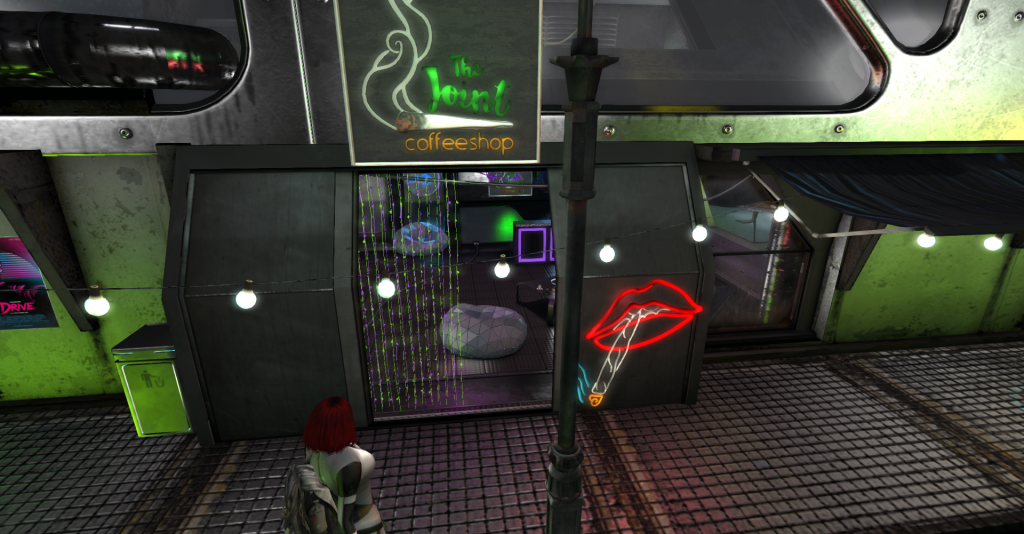 Inside was a small dancefloor and the coffee serving counter, nothing too exciting.

Across from The Joint, is a trip club called Voltaic. 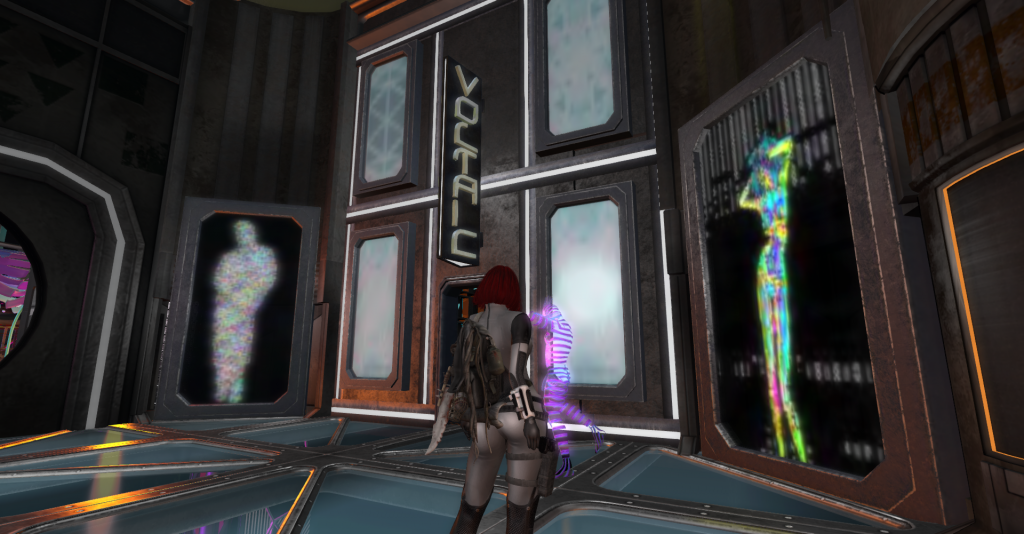 Following on into the next room through a circular doorway; 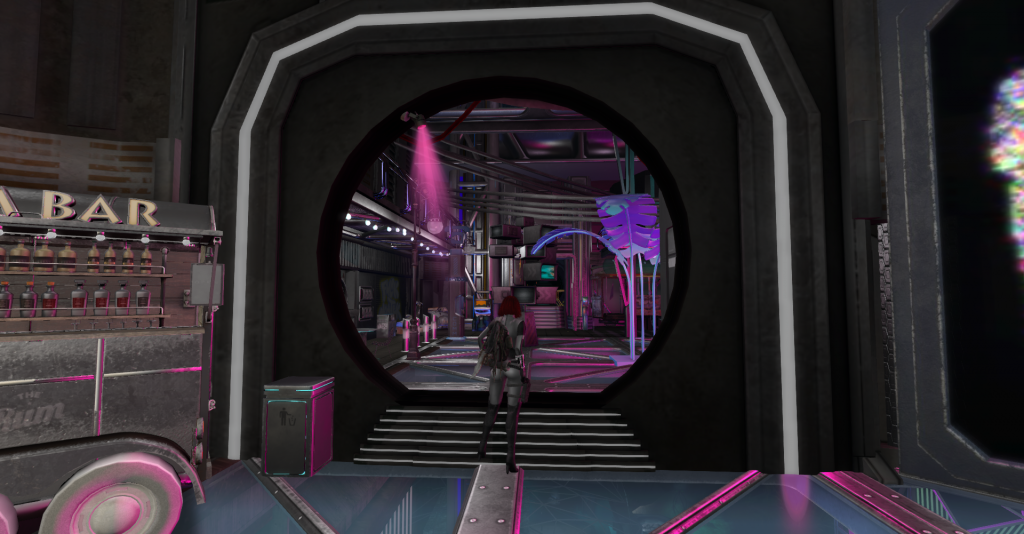 there’s some other vendor booths,but what draws my attention is a train. 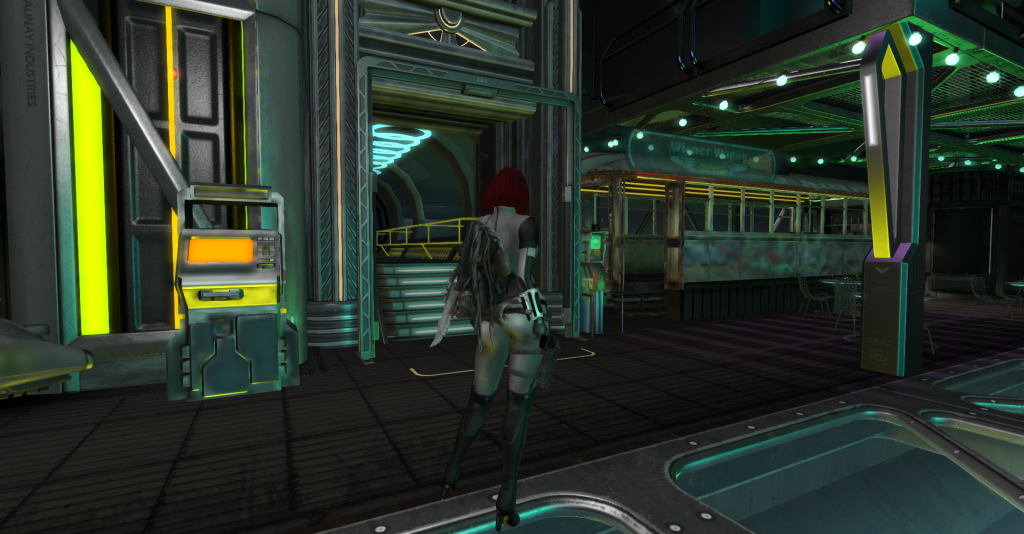 Yes of all things, a train car made into a dining area. Maybe there was a nasty accident on the surface and it fell off a bridge or something and got salvaged, who knows.

I took a seat for a moment but the food didn’t look very appetising.

Outside there is another tunnel, I had a brief look and could see it seemed to go on for quite some distance with various junctions coming off it. Maybe to be explored another day. (I found out later that the private rental accommodation is down the far end, so best I didin’t disturb anyone.) 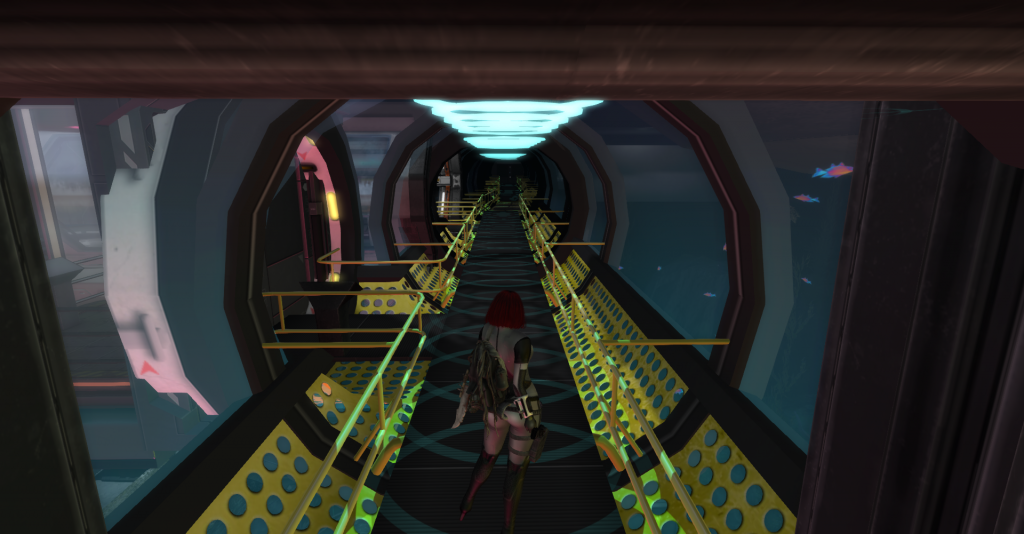 I took the first door I came to, which was a lift that took me up to a rather classier style of establishment It was as I walked through these rooms I realised my previous mistake. I was directly *above* the club I’d previously visited and had completely missed it!

There’s a fancy piano bar and an observatory bar where the rich could look out at the beautiful oceanscape view while sipping their overpriced drinks.

How I missed the lift outside the club..I don’t know..lured by the neon I guess to see what lay within. 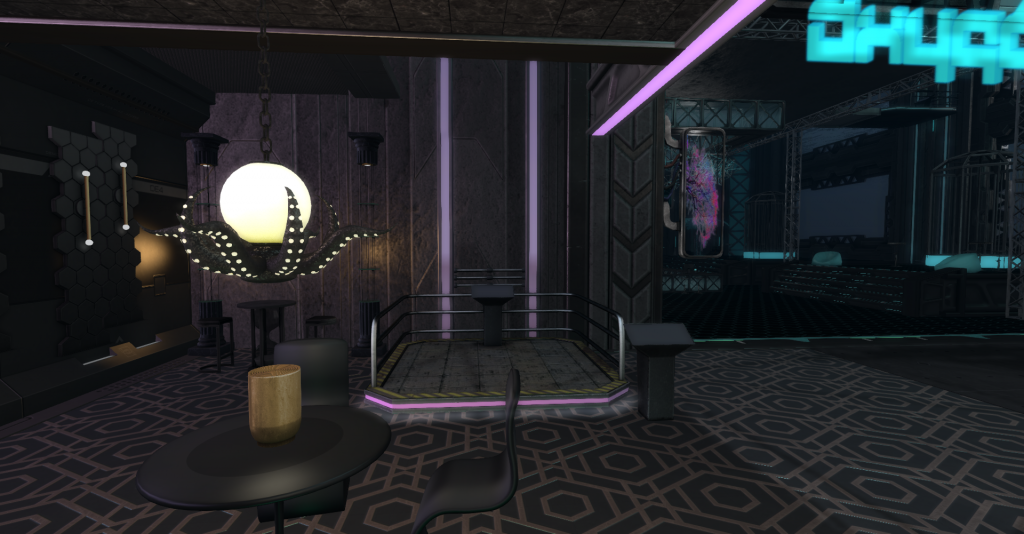 The room I passed on the right on my first visit..

..turns out it isn’t a dead end, there’s a lift at the back of there too.

I began my first post on the Varuna Project with references to Hangars Liquides and Drune, but I didn’t really draw an actual conclusion at the end. I briefly dropped by Hangars Liquides before finishing this post to refresh my memory, glad I did. It reminded me that it’s not quite so shiny (as in darker with more graffiti) as I remembered, especially with EEP implemented now.

The lower levels at Varuna are definitely like Drune in parts, but like Hangars Liquides in others. Having now seen the more luxurious area of the Entertainment District at Varnus Project, the bar put me in mind of the Voodoo club in Drune, but larger and plusher. Whatever your taste or favoured genre of entertainment, you can probably find a setting for it here.

If you didnt take the time to explore The Varuna Project yet, it’s definitely one to be seen. If you did see it already, it’s worth a seconf look.

Region Rating: Adult.
Although most video games classed 15 are more graphic than this place. As with Last Chance City, it’s the potential RP and peoples actions that might require the rating.