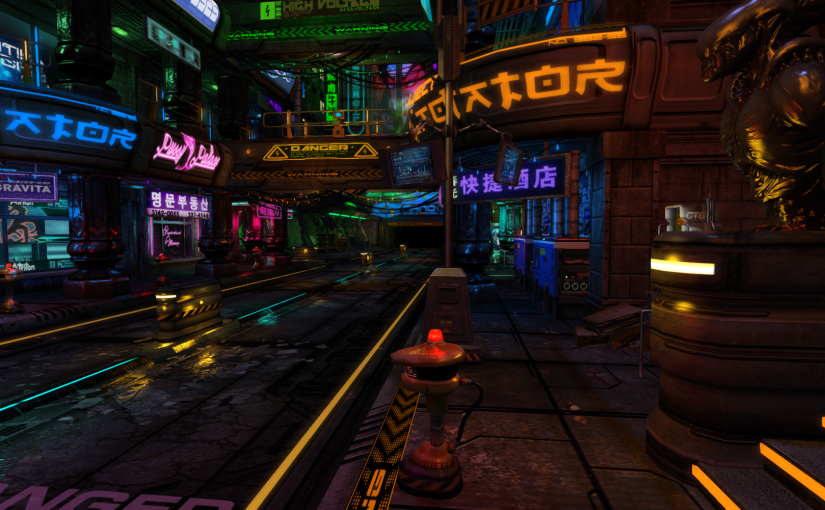 Another district of Drune is unveiled to us!

In a similar style but not ground layout as the previous build (Drune Crossroads), Drune Babalon is full of lights in a dark setting.

Like Crossroads you arrive by tube (Subway), although this time the arrival point is in a carriage rather than on the platform.

Unfortunately the TP routing drops you too close to the back of the carriage when using the default camera position. Just take a step forward. 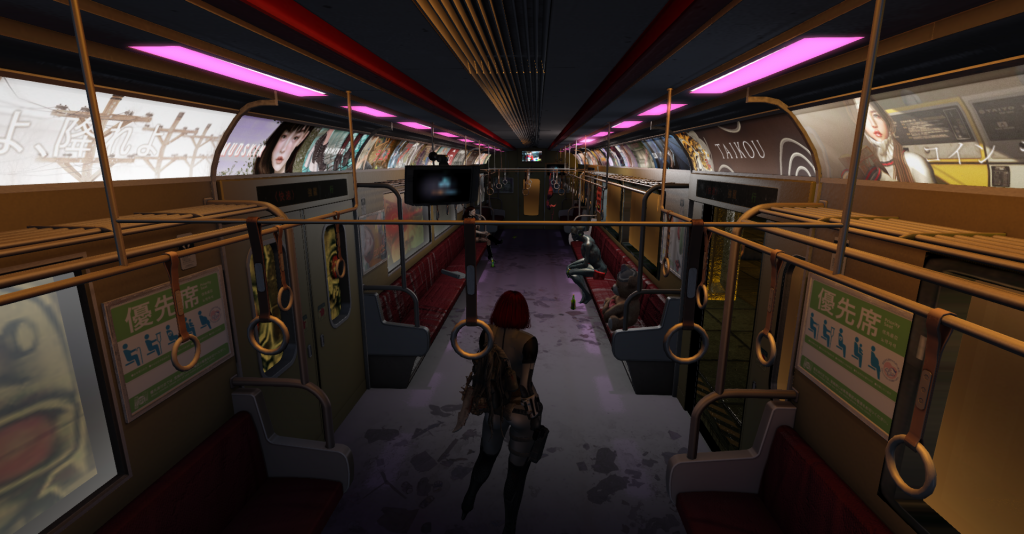 Walk along the carriage til you come to the doors 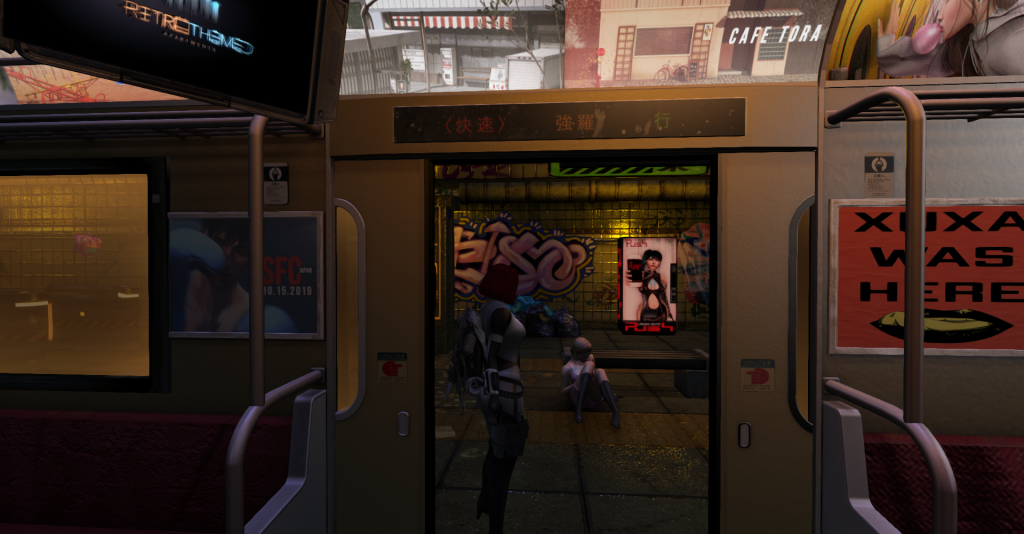 and step out onto the platform 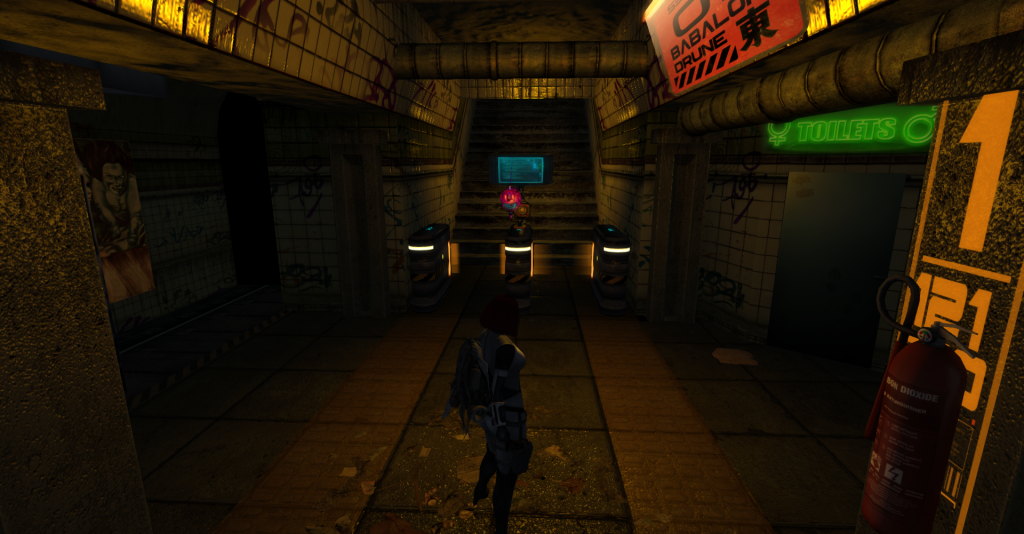 Exit up the stair into a much smaller lobby leading out onto the street: 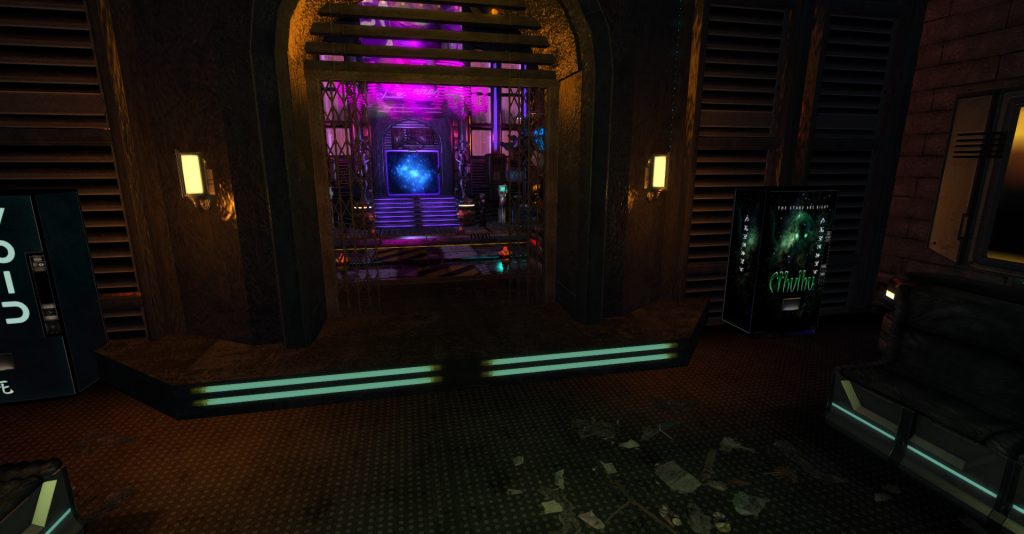 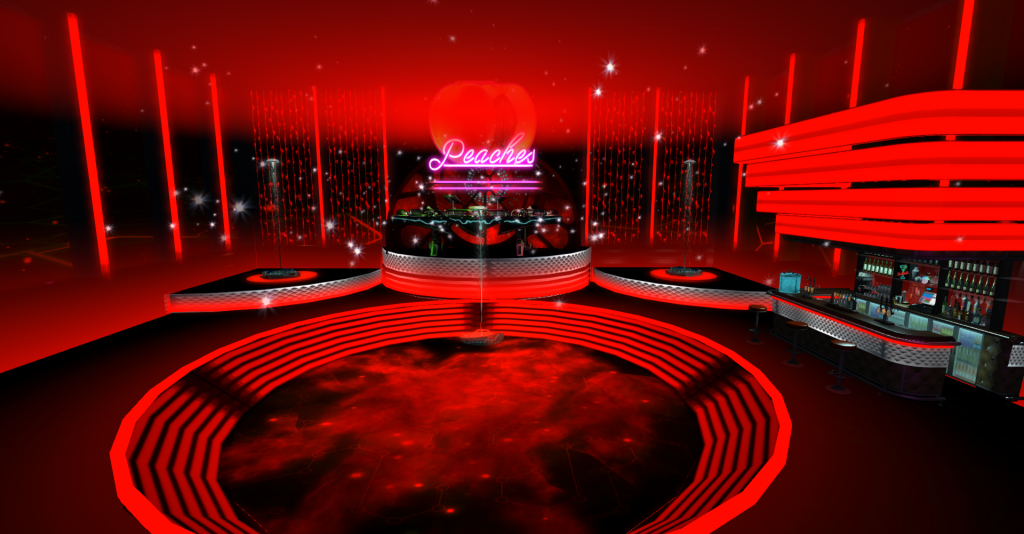 Which took me into a small club calle “Peaches”. The neon lights change very regularly to different colours, giving the club a different feel from minute to minute, but thankfully not at a fast flickering speed.

Coming back out I saw a weapons shop across the street, a reminder of the dark kind of RP that could be found here.

Along the street I find a club East of Eden, but didn’t go inside 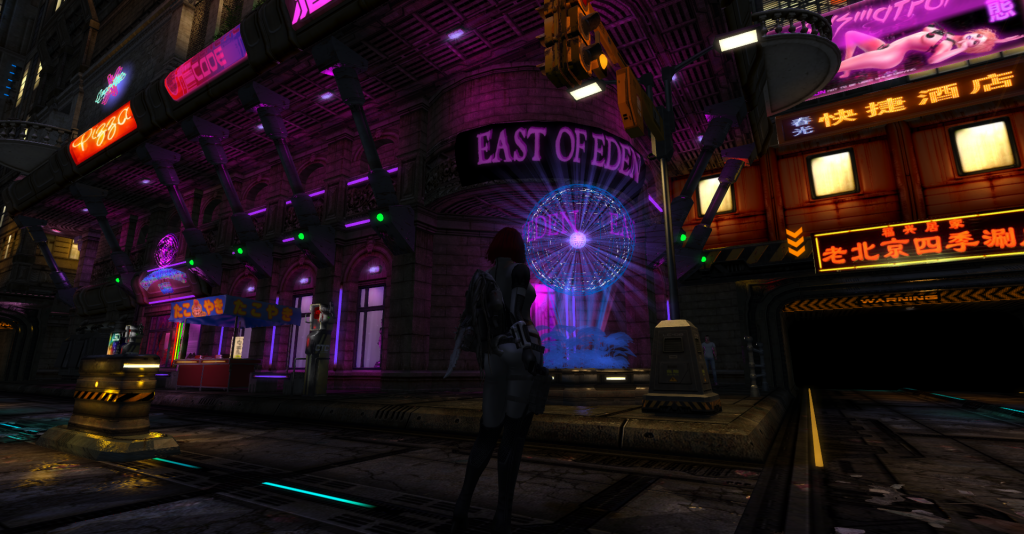 The building across the street was more intruiging..”Jesus Saves..with Drune Central Bank”. I wondered whether I find pews or bank teller cubicles inside. 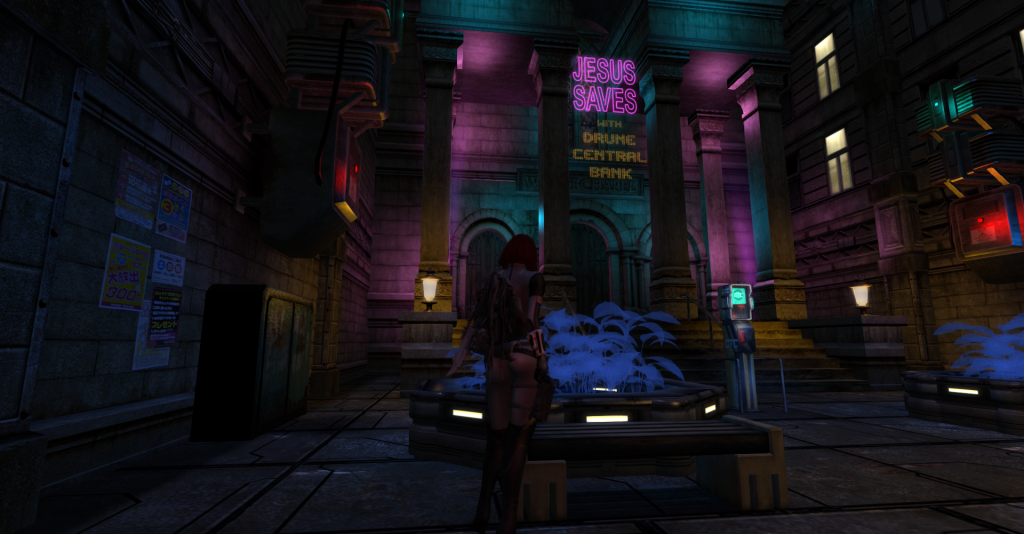 Turned out it was neither, the church had been converted into a nightclub,the pulpit the DJ Booth. 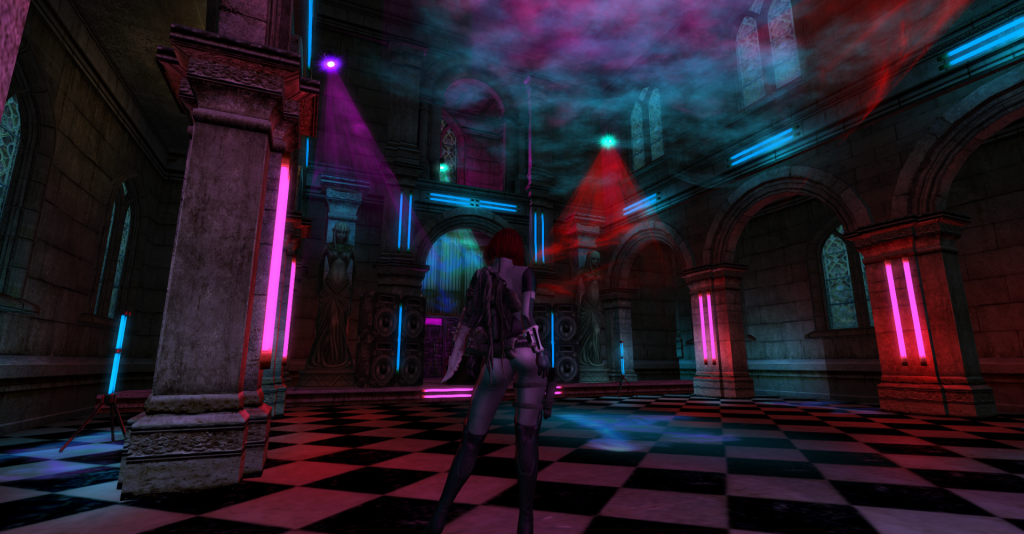 Out on the street again I see a neon sign for another potentially interesting place to investigate, a Fight Club. 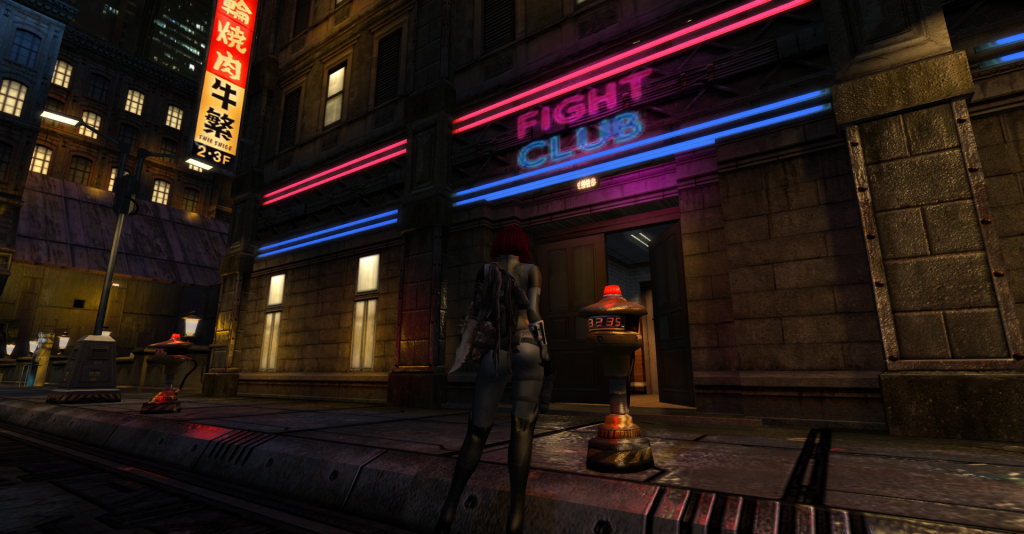 This place wasn’t too surprising on the inside, exactly as it proclaimed.

While I explored it became evident that while the layout of the streets near the station were similar to Crossroads, there was more levels to Babalon. The Crossroads had another level but it was high up above street level, here the levels are more evident, due to a waterway running through the region. This meant there was a lower waterside level.

So obviously I had to explore the lower level and see what trouble may be found. 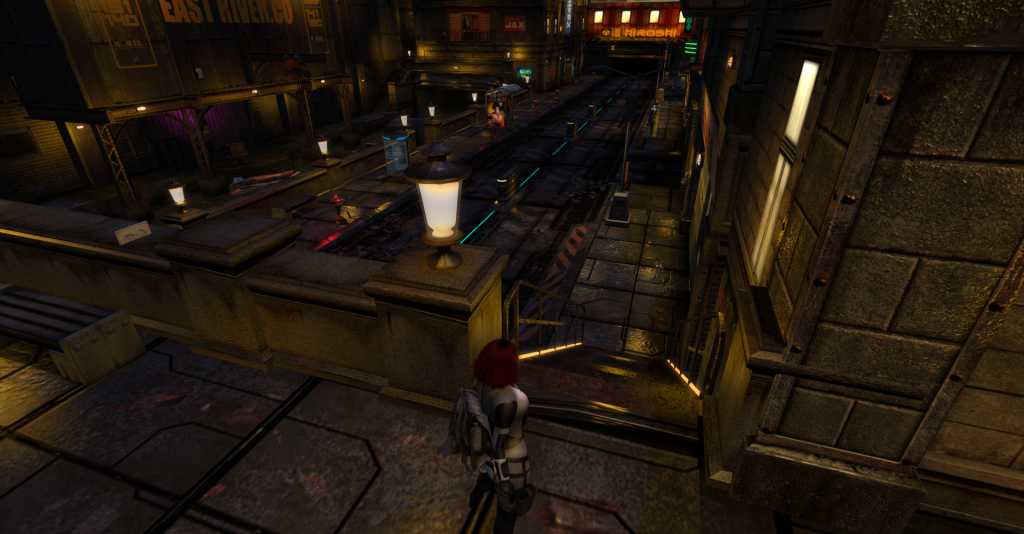 However before I descended I spotted a tiny detail on the bridge, just some puddles, but is another example of the attention to detail in Drune builds.

As I descended to the lower level I could see some brightly lit places that might warrant later investigation. 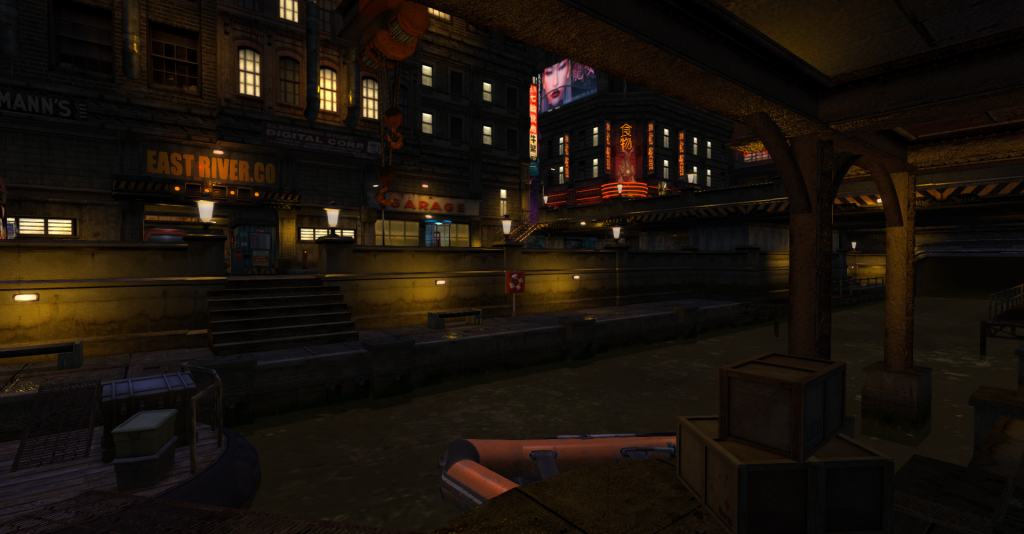 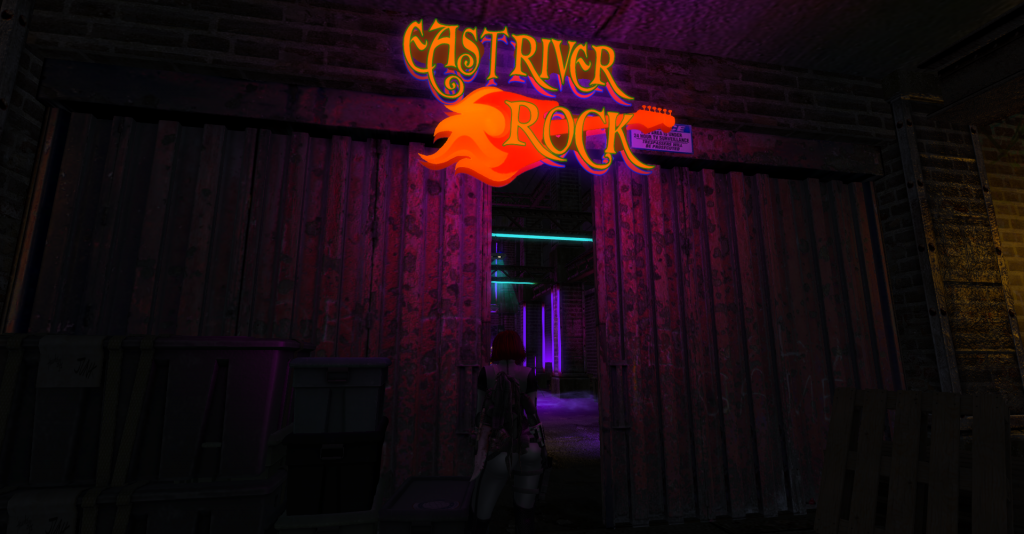 But Drune being a Roleplay simulation, it’s unlikely it’ll see any dancing.

Back outside I found there was a walkway that ran underthe bridges, but no way to cross the river without getting wet. 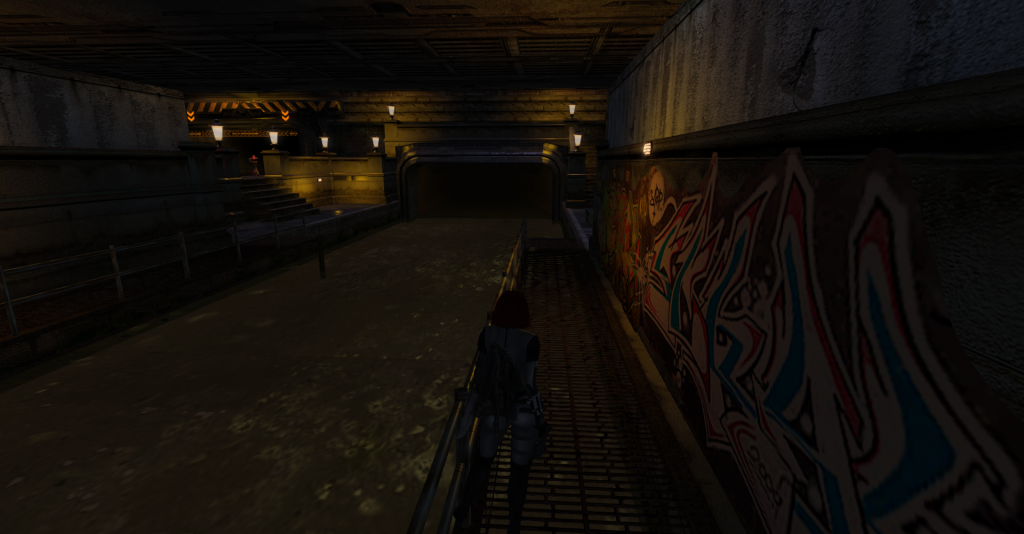 I retraced my steps and crossed over to look at the other places I’d seen. The most brightly lit turned out to be a chinese restaraunt. As you would expect from a Drune build,while not particularly exciting, this wasn’t just an empty facade.

Nearby however I found a small starirway and followed it up. 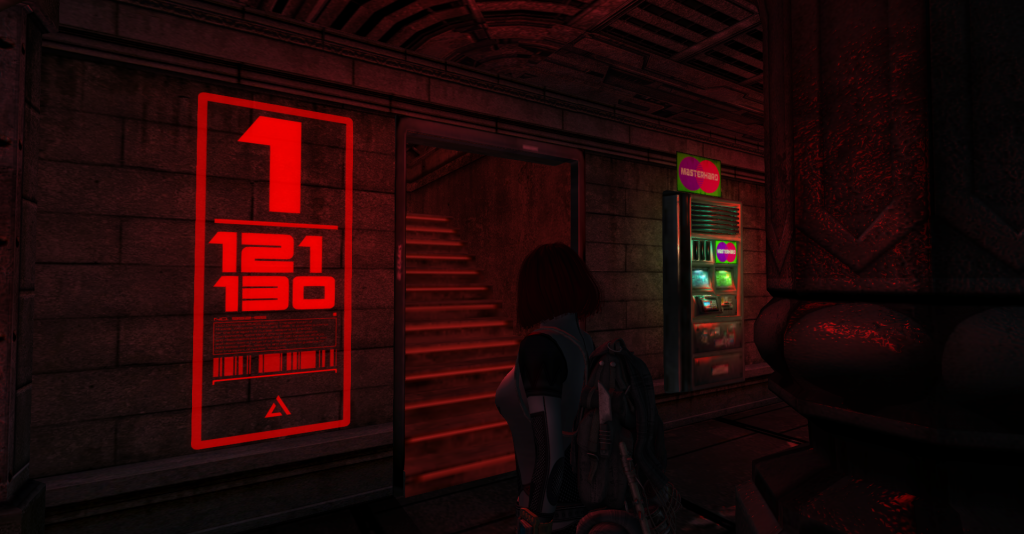 On the upper level I found a small cafe and access onto a walkway similar to that of Crossroads, but not quite as extensive.

When I reached the end of the walkway and a brief rest, I took the quickest way down to the ground, off the edge again. The fal being much shorterthan the one in Crossroads! 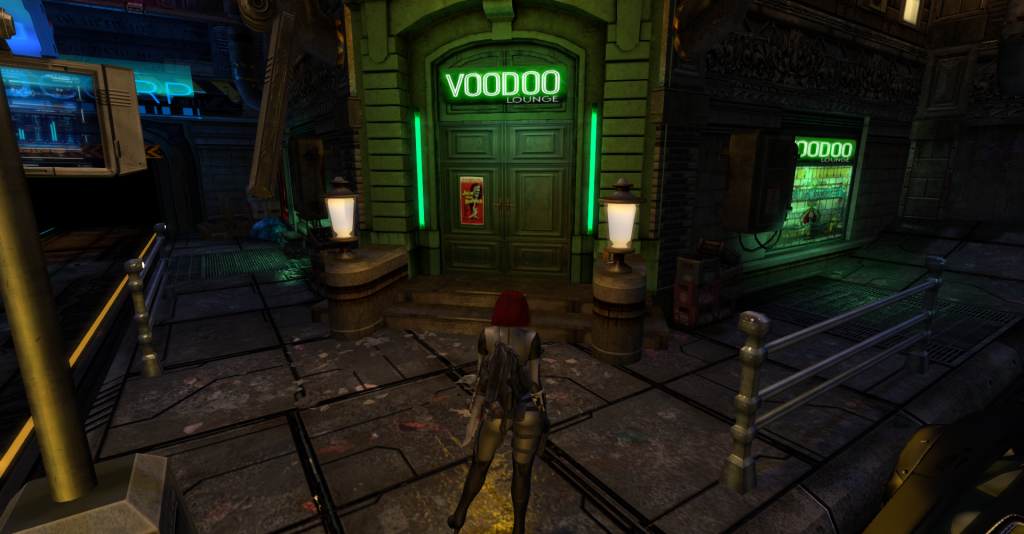 At the end of my post about Crossroads, I commented that it could probably have got away with a Moderate rating,due to the establishment signage being merely suggestive and absence of adult furniture. So I thought I’d have a look and see if the same was true here.

When I arrived I’d tried a few doors and they seemed to have combination locks keeping the public out, seems I’d just been clicking the wrong part of the lock.

So first stop was a massage parlor, which turned to have functioning massage couches.

Then the more flagrant establishment across from the station..which was pretty much as you’d expect,but more peepshow type than couples animations.

So this district of Drune definitely requires it’s Adult rating. But as you can see, this is just fairly small aspect of the highly detailed cyberpunk build. Which along with bars and clubs, even includes your regular mundane service vendors..

As always we never know how long these builds will stay around, so go check it out before its gone.

Note on lighting: This Drune build uses an EEP shared lighting model, you’ll get a notecard about it when you arrive. If you don’t have EEP viewer thinks might look different.
(Also besides EEP implementation the photos got a whole lot better since the Crosroads post because I got a sweet new laptop with much better graphics!)

This post was featured on the SecondLife Community Blog on 5th January 2021.