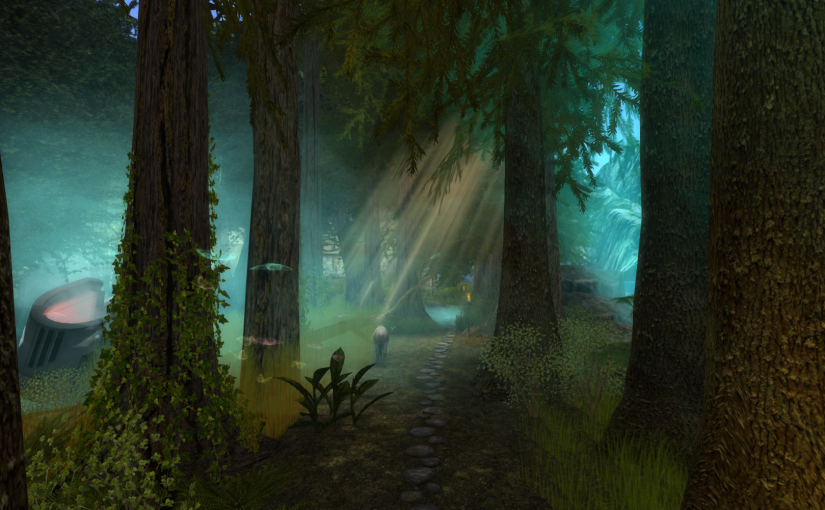 Sindaria – New Runner City as written on a blog post header image that led me here, is a rather misleading title, but not incorrect as I found out. I arrived at the landing point dressed in the sci-fi costume that I wore when exploring The Varune Project, but that didn’t really fit where I ended up.

Head through the only exit and you’ll find two teleporters to begin your exploration.

There are two departure teleport doors from the arrival area, a stone arch and a neon-lit, steam surrounded metal door, which really was a rather obvious clue it goes to the cyberpunk location. Anyway I took the stone archway and landed in an medieval style village.

I headed towards the village, to explore, having a look at a few of the houses, it’s basically a small fishing village.

I went up into the little watchtower to have a better look around the area and was prompted to accept an inworld experie permission to sit my avatar. Upon accepting it, I was teleported to a similar lookout building in a much larger village around a lake. 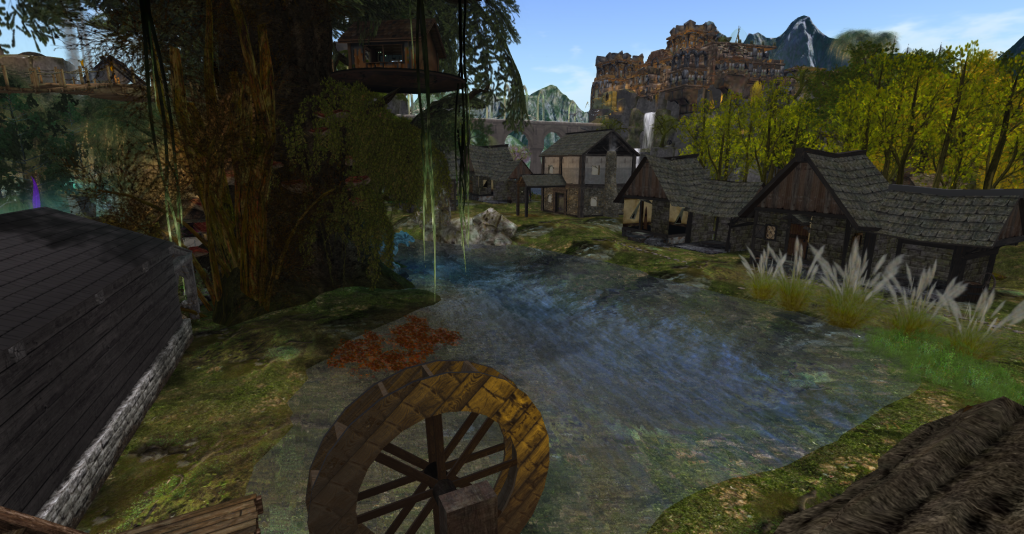 This is where it starts to get impressive, the area is very large, covering multiple regions. Beyond the village there is a beautiful forested area with an orchard then some ruins and rock terrain leading up caves. I started waking around the lakeshore, it’s beautiful from every angle, with lots to see up above.

I then came to the first of the etheral structures to be found here.

In the distance a stone arch with green light on the far side beckons me. 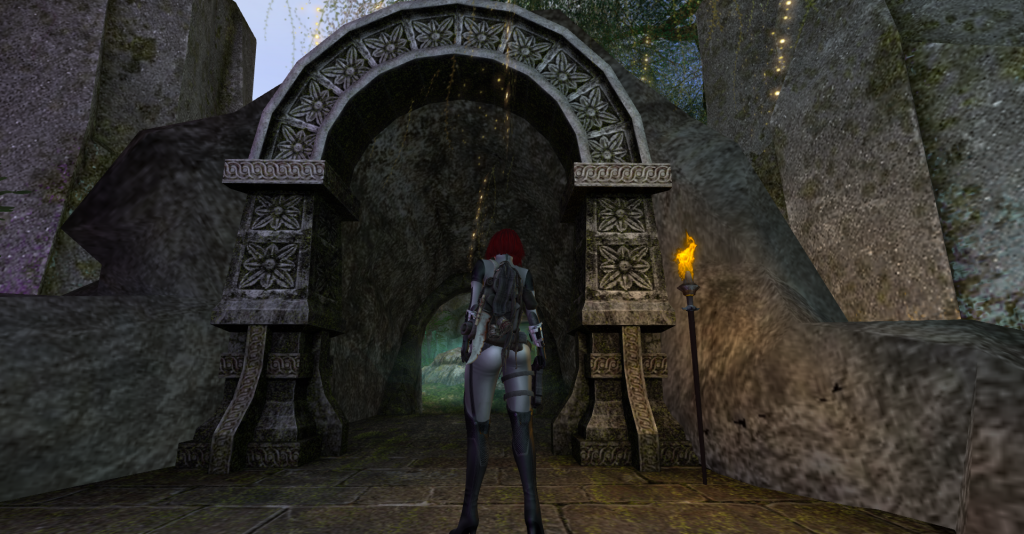 This led me into the forested area with so many visual wonders to see.

This reminded me so much of the Isle of Shadows Region of Fantasy Faire 2020 I felt I had to include a photo from my Fantasy Faire post here.

The woodland here however doesn’t develop into a daker tone as you move through it. It reminded me a little bit of Waterfalls and Dreams, (which I must admit I was rather overly critical of the place) but with more forest than water here. I took so many snapshots as I explored this region, so to save overload/boring you like an old holiday slideshow, I’ve just included some of my favourite shots from this area of the forest before I moved on.

I came to another archway and a set of stairs. obviously they both needed exploring. 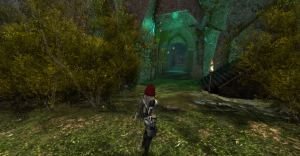 Since there was likely more through the arch, I took the stairs first.

Continuing through the arch take me into the orchard I mentione, I would say it’s possibly intended to be harvested by hobbits, since each tree has a little ladder!

In the background you can see a ladder going up into a cave, I just had to explore. At the top of the ladder (sit on it to go up) you enter a windy series of caves winding a very long way up. There are some open parts that give you a good view of the region, this my favourite:

When you move on up the steps you come to the gates of a house built on a floating island.

Then comes the inevitable incident that happens at least once when I’m exploring a place, I fell off something. Into a pond, a pretty pond, but still thigh deep water.

I took a rather sloshy walk to the shore then followed it through another area of woodland. This place was far more sheltered, the kind of place that would be lovely to walk through on a hot day. Also down here I found something that made me feel less guilty for walking around an Elven Forest region in a spacesuit. A crashed Police hovercar in the river.

A short walk further along the river brings me to the entrance to a town, which for some reason (perhaps it was the two npc guards), made me think of Ankh-Morpork.

I really enjoyed exploring this part of Sindaria, it was very relaxing wandering through the pretty landscape on a rainy weekend in the physical world. Anyone liking your Elvish and medieval places should definitely check it out. I’ll probably come back myself to explore the neighbouring region,but properly attired next time. However as the title of the post suggests I’ll be blogging the Sci-Fi cyberpunk part of Sindaria very soon. Landing Point: https://maps.secondlife.com/secondlife/Sindaria/58/91/1089 Website: https://www.worldanvil.com/w/sindaria-scarlet-fey