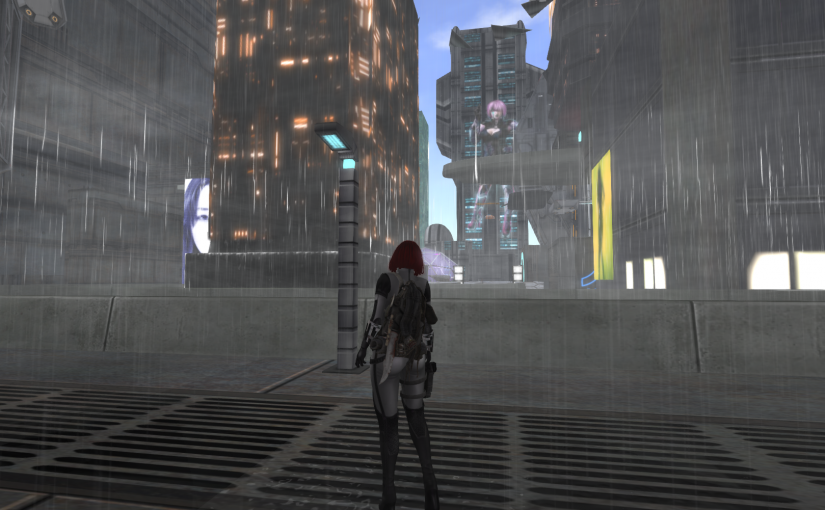 I found Sindaria via a Scoop.it article that led me through to a Blog post about the Cyberpunk area of Sindaria. At the time of writing my previous post on Sindaria, I hadn’t fully read the said blog post, for which I owe the author an apology for seeming rather dismissive of it,when that wasn’t my intention. Anyway onto my visit to this city. Obviously this time I took the other teleport doorway, the one lit with neon. 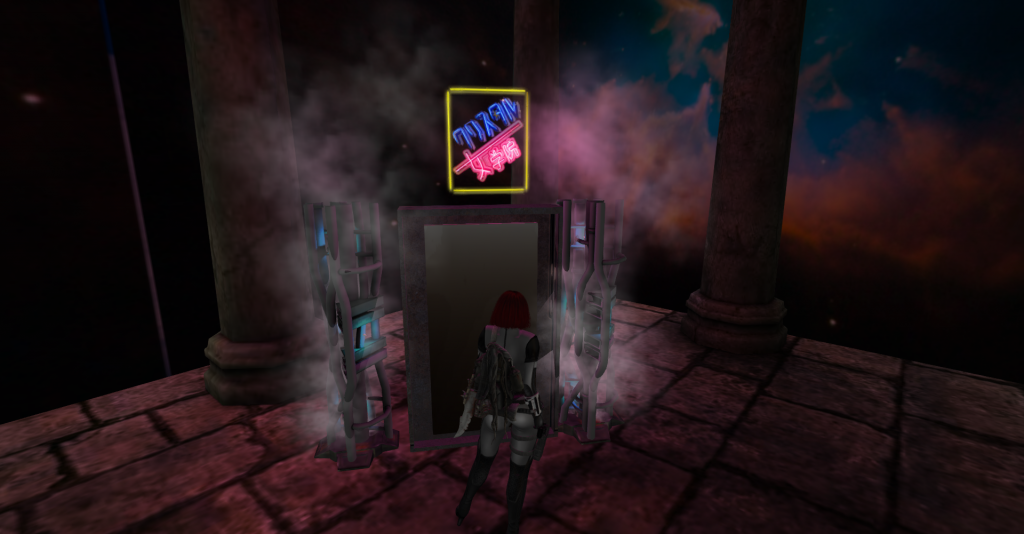 The teleporter to New Runner City

This brings me to a large circular platform surrounded by skyscrapers with giant ad boards on them (not actual advertising for inworld stores or services, RP related). The one that stood out the most was one for a place called “Galaxy Glub”, so clearly a place I’d have to look at. 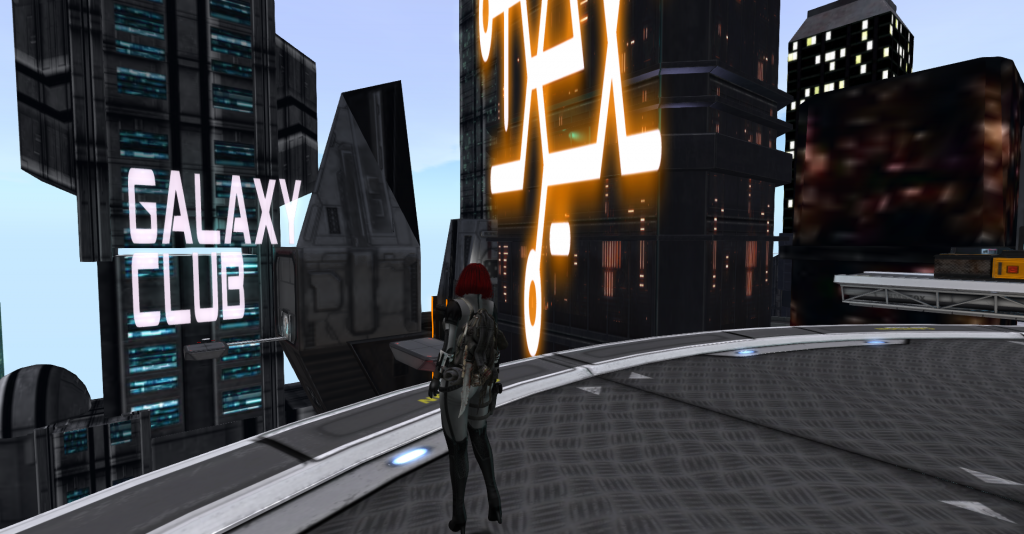 Nearby is a shuttle landing platform that I headed for.

Before I left however I thought I’d mention the eco-dome type structure containing a few trees. A nod to the other theme on the region, like the police car in the Elven Woodland area below. 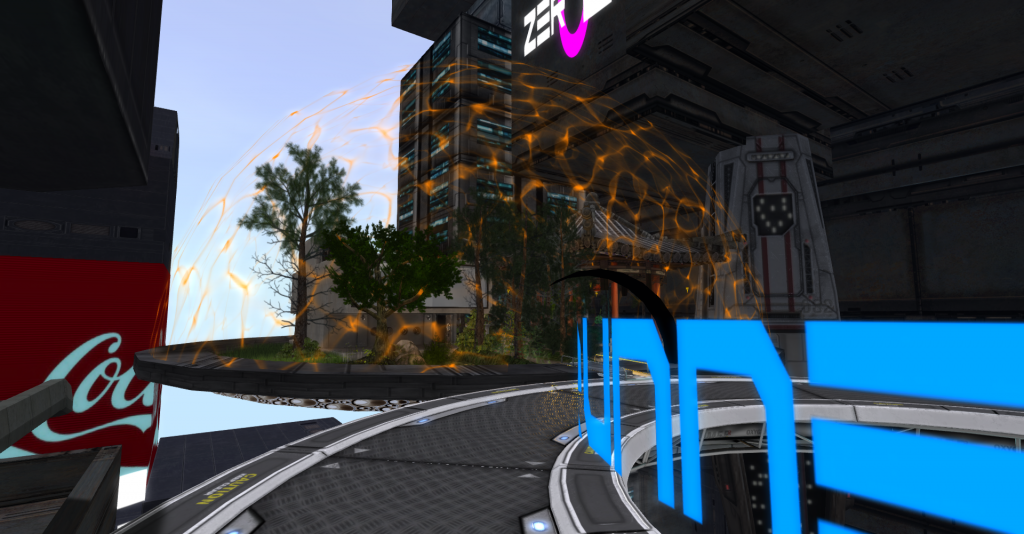 At the shuttle platform I hit the big green call button and a shuttle could be heard approaching and landed next to me and I boarded.

The shuttle system is fairly impressive with quite a number of locations it will take you. I picked a location at random and the shuttle tok off and flew me down to a lower level, rather smoothly.

At the bottom I found myself a short distance from the Galaxy Club so I went to investigate. 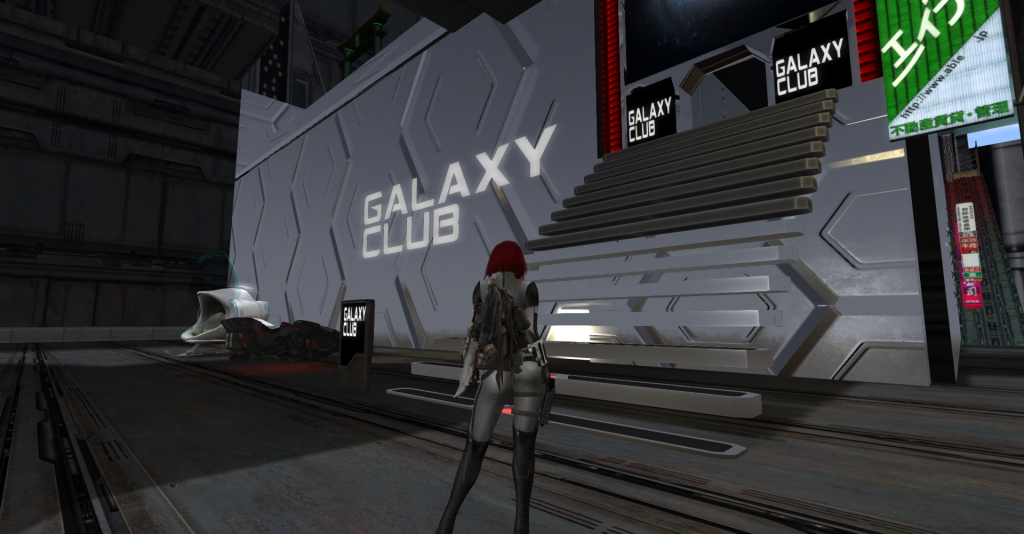 As Secondlife clubs go this was fairly mediocre, but given the region is meant for RP not parties, this is understandable, much more effort has been spent elsewhere.

Back outside I found a teleport station, again with a reasonable number of destinations. This is good, because as I explored I kept finding more to see, similar to Hangars Liquides, but on a smaller scale. I ended up at what appeard to be the rear of the club, near the entrance to another unidentified building. No signage and a locked door. What was beyond this place however I found more interesting.

Rain. Yes I know sounds weird, but when most people try to add weather to a place in SL, it looks dreadful. Not that it’s something you deliberately look for, but it stood out to me because it was so atmospherically accurate and appropriate to the setting.

To my left I saw what appeared to be pink crosses so went to investigate, I guess even cyberpunks need religion, but this seemed more of the Vegas variety.

I headed out in the opposite direction to see how far the rain went and where the road led. 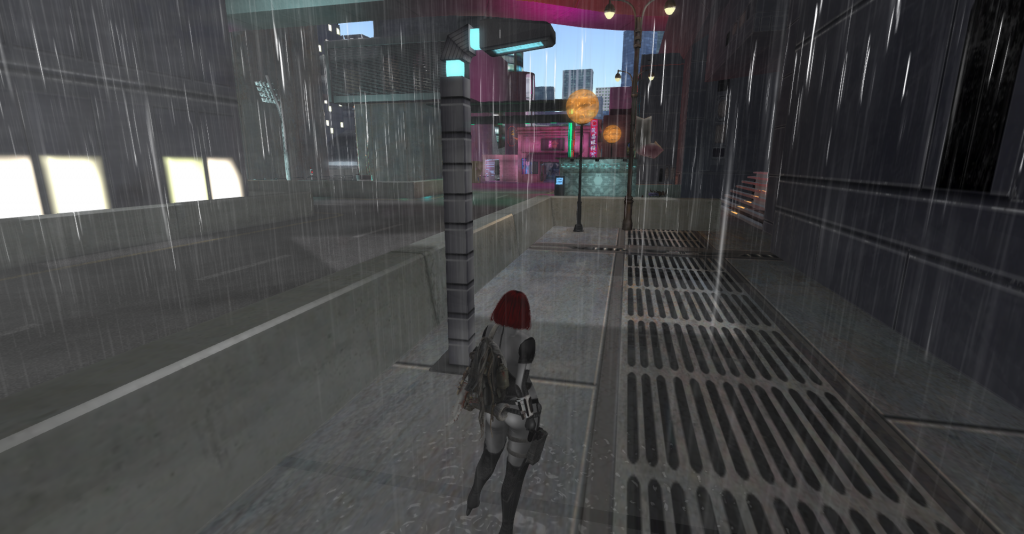 The rain didn’t extend far, but the road does, lots of winding bends, leading downhill. The further down you go, the scruffier it gets, more proligic garffiti and the like abound.

I didn’t explore much more of the region beyond this, it would take quite some time with the city being so large. Lots of RP locations everywhere and multiple transport methods to find and get to them. If you like your Cyberpunk RP this is a place to definitely check out. Usually I keep my writing about SL, because making comparisons to PC games is usually like comparing chalk and cheese. However while I was writing this peice I saw a video that mentions the much hyped Cyberpunk 2077 game. I haven’t played the game on any platform so I watched it with inerest to hear a critical analysis. It was mentioned a few times that the linear nature of the game didn’t allow for much aesthetic character customisation or Roleplay in what was meant to be an Roleplaying Game. But to me that’s like trying to hammer a nail with the handle of a screwdriver, it’ll work, but isn’t the right tool. You want to aesthetically customise you character to your hearts desire with few constraints and have freeform RP? Sign up to SecondLife and spend the game price on Lindens (at time of writing that’s about $L 16,400) to customize your avie to your hearts desire. Then visit the cyberpunk location of your choice and RP away. Obviously if you want to go round shooting folk and NPC’s as part of a structured plot, it’s not for you, but if your focus is the “RP” in RPG give it a go. Landing Point: https://maps.secondlife.com/secondlife/Sindaria/58/91/1089 Website: https://www.worldanvil.com/w/sindaria-scarlet-fey The Cyberpunk 2077 video mentioned: Youtube

This post was featured on the SecondLife Community Blog on 20th January 2021.