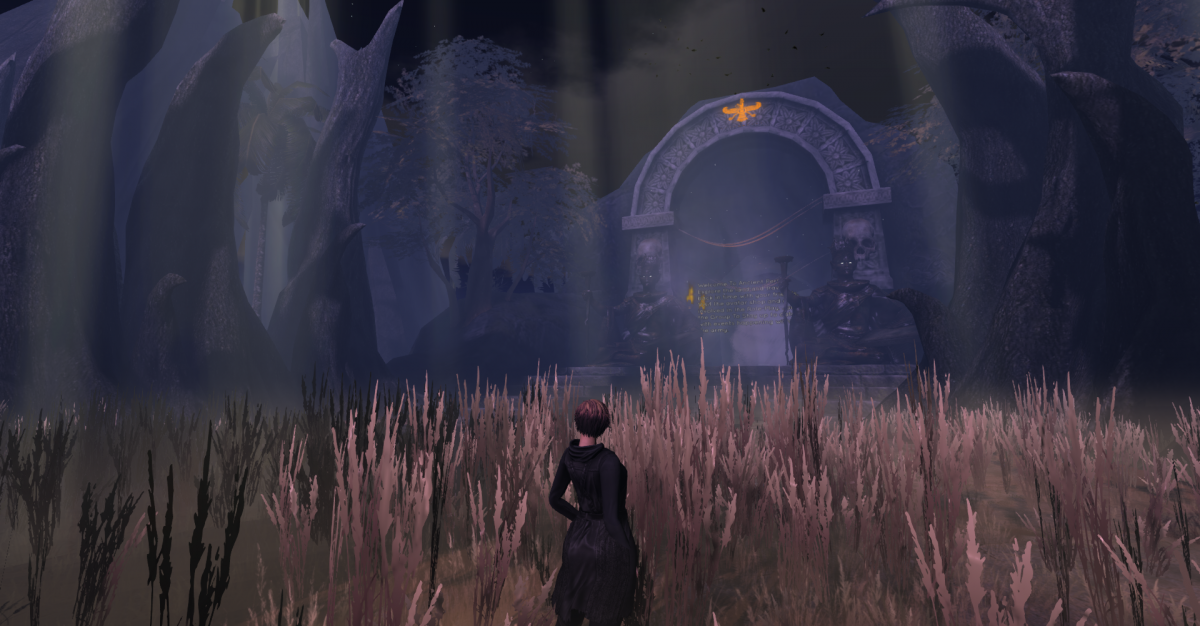 This place is beautiful shadow-draped historically styled region based on ancient Persia of 550B.C.

Arriving through some undergrowth to the bottom of a set of steps drenched in shadows of statues cast by purple moonlight, it has got to to be one of my favourite region arrivals for quite a while. 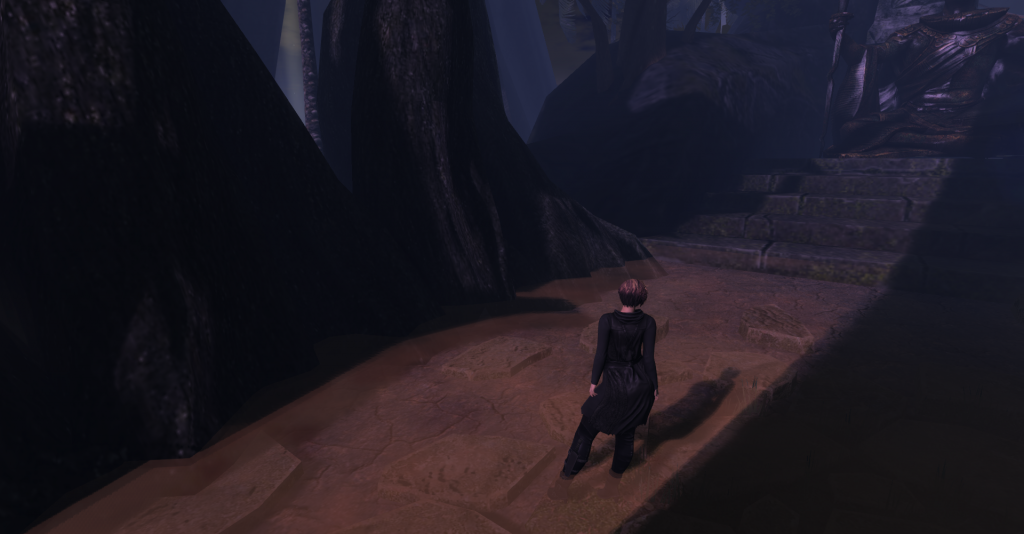 As you proceed its pleasantly free of clutter, just a few boards, but not intrusive, before you come to your ride. 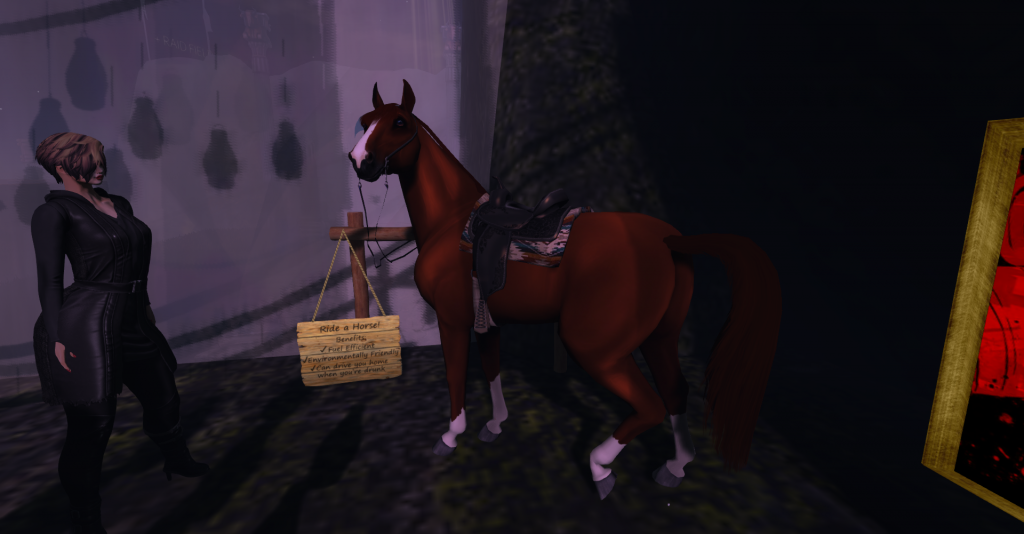 Just click the horse and choose a name from the menu to get your own horse to ride. I picked “magic” because that’s how the place feels. You proceed by walking through a multi-layered veil into a dark but open space. 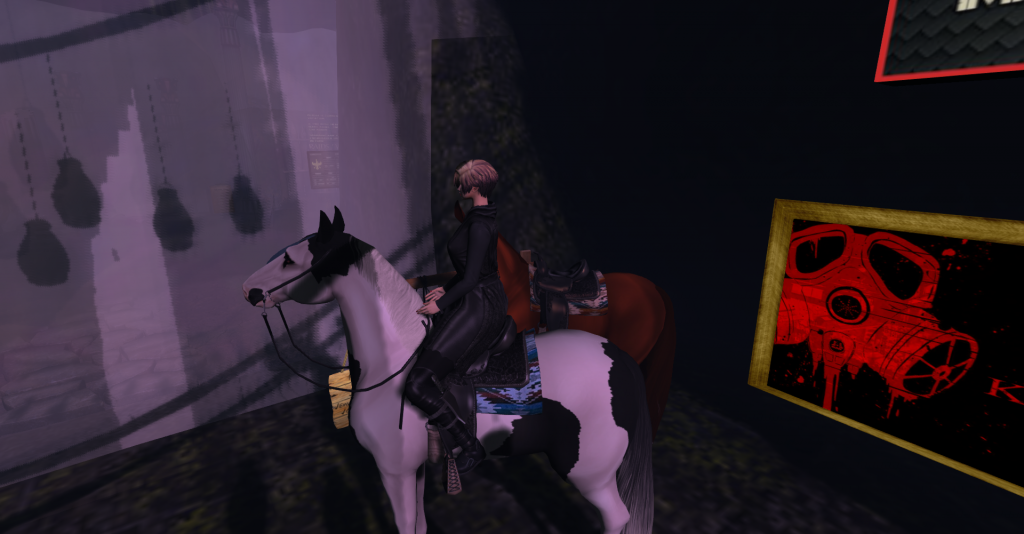 When you go through it’s such a view, dark and mysterious. To the left is the top arches of an arena, some steps ahead and to the right a small plain leading to a river. 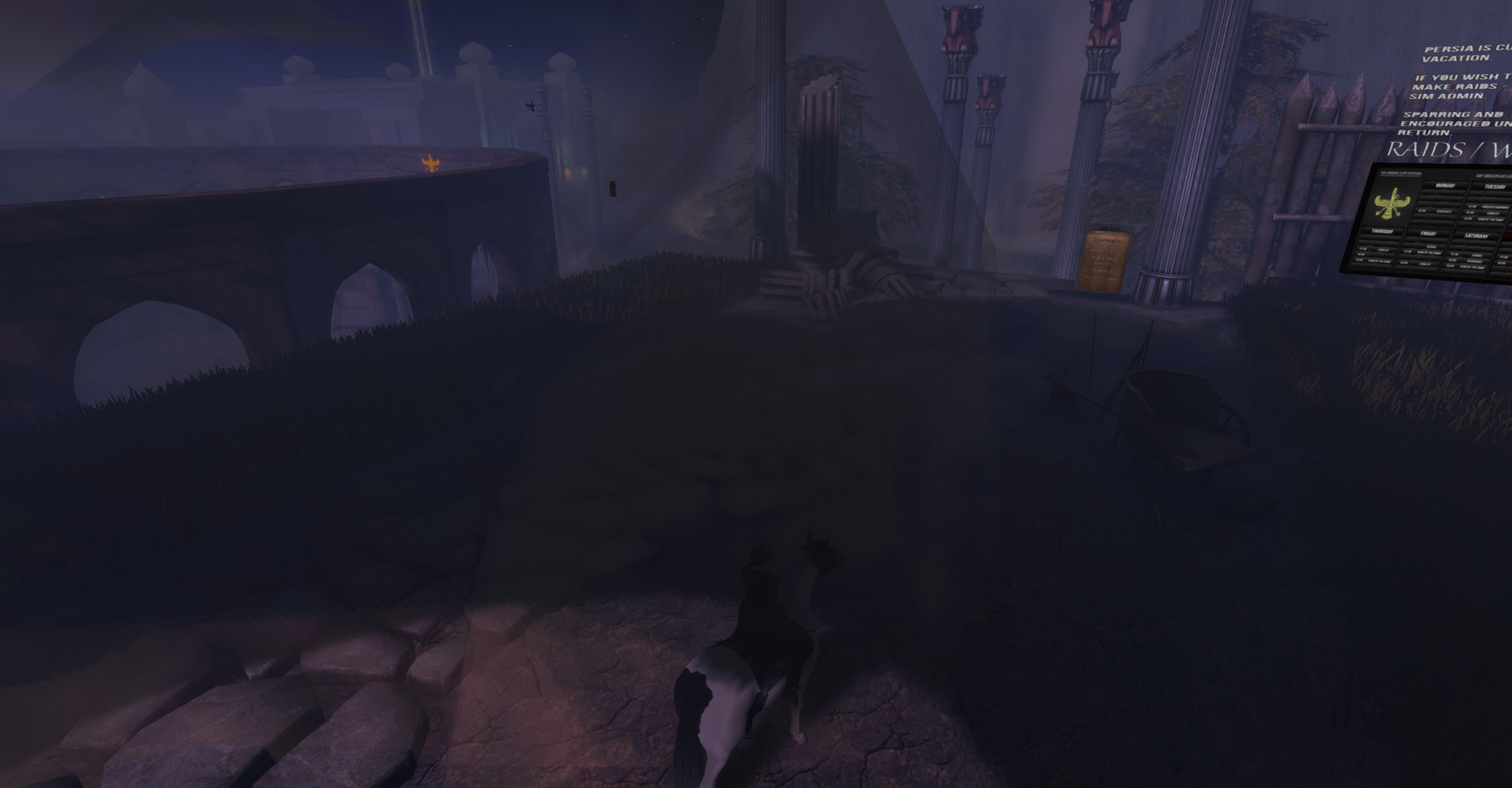 At the top of the steps is a sign reading:

Seeing the word “Raid” I decided I’d check that later and headed to the right towards the the intruiging palm trees and buildings.

Heading towards the distant lights there are buildings and palm trees. 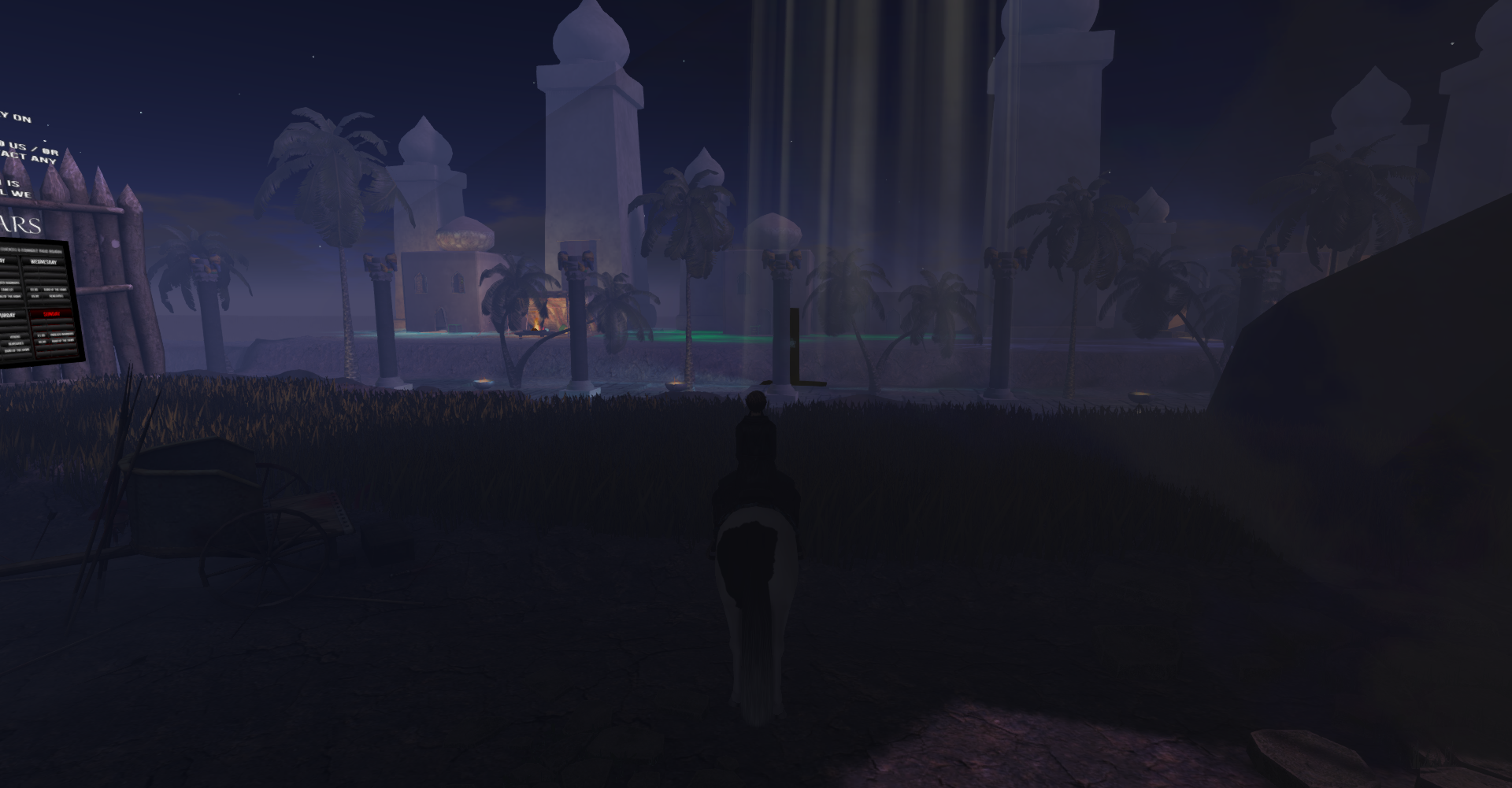 Down a gentle bank is a paved collanade following the path of a dry stream bed. Across the here are a few small homes, some of which are for rent.

Having seen all there was in this area I backtracked towards the steps and the arena.

I headed down the steep steps and onto the cobbled path below, passing the entrance to the Arena. The next thing tou see is an imposing temple, which I’ll investigate later, there’s a more impressive view ahead.

What caught my attention ahead were two rather large bridges arching over an impressive harbour scene. 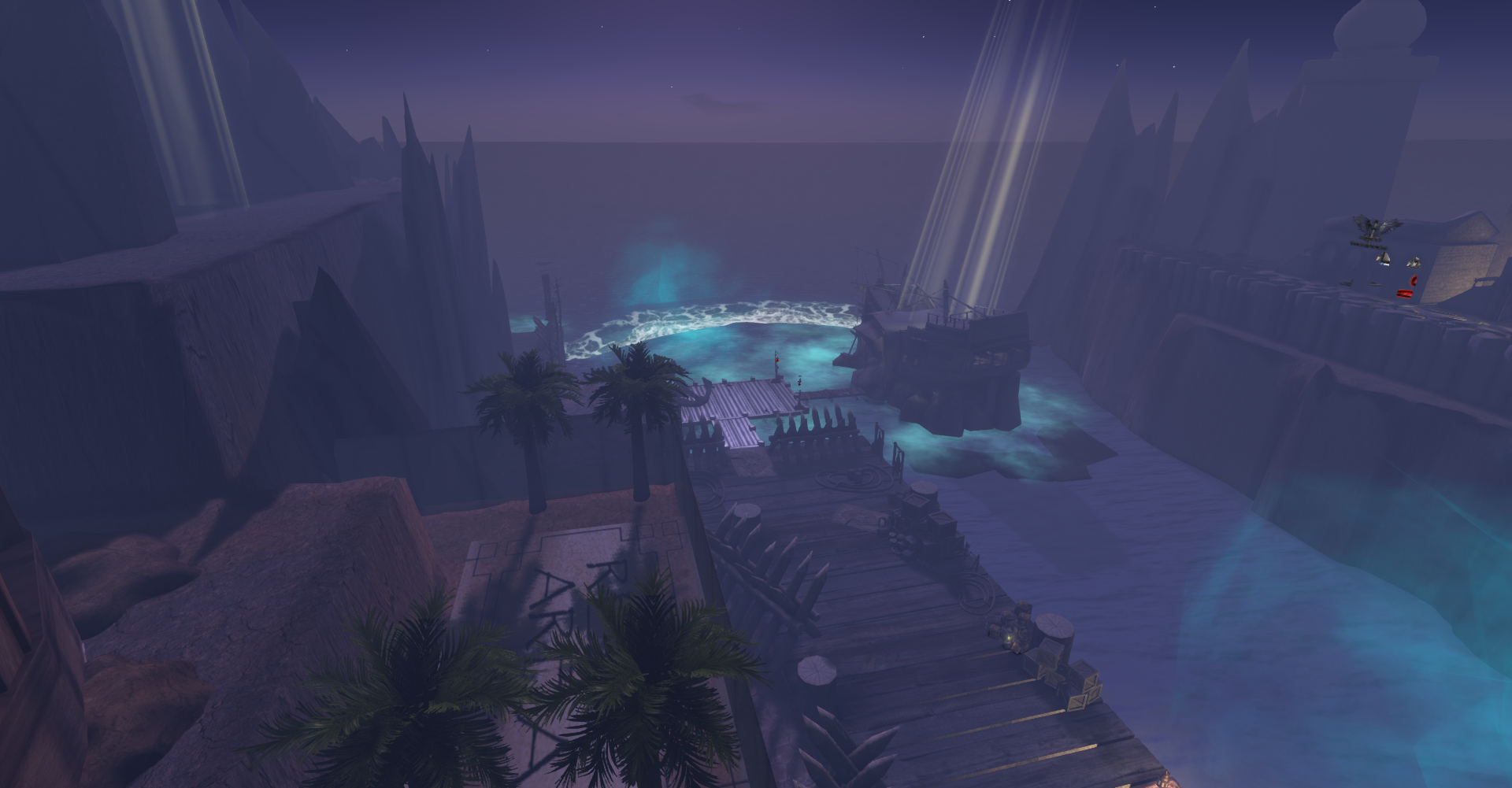 I took the nearest bridge and crossed to the other side where there is a row of various shops. These sell an assortment of appropriately themed weapons and RP props. I headed left towards the harbour mouth until I came to a guard (npc) blocking your way. Mainly because there’s nowhere else to go except back the way you came, or steps onto the roofs of the shops.

Back at the other end of the row there is a narrow but passable slope that used to get back down to the plains. 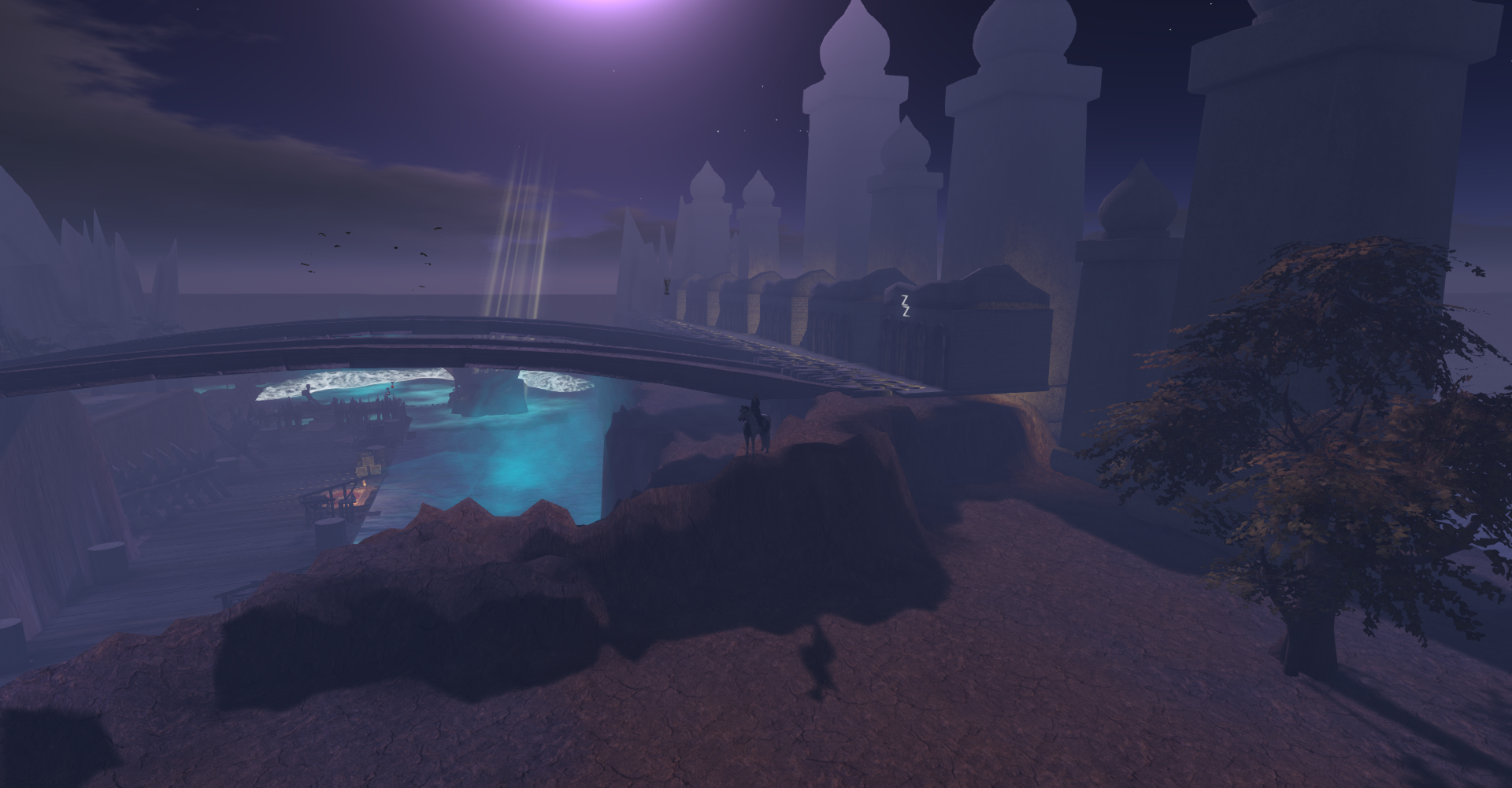 The bottom of this slope leads me towards the temples, so time to have a look inside. It’s rather imposing from the outside, with steps on either side of the entrance leading up to it. Inside its suitably gloomy in kind with the surroundings, lit by torches near the altar. It does have the feeling of reverence you often experience at religious sites, although I can’t really explain how that works in a virtua space.

Strangely however it’s for rent..but I couldn’t find any kind of residential accommodation thereabouts. 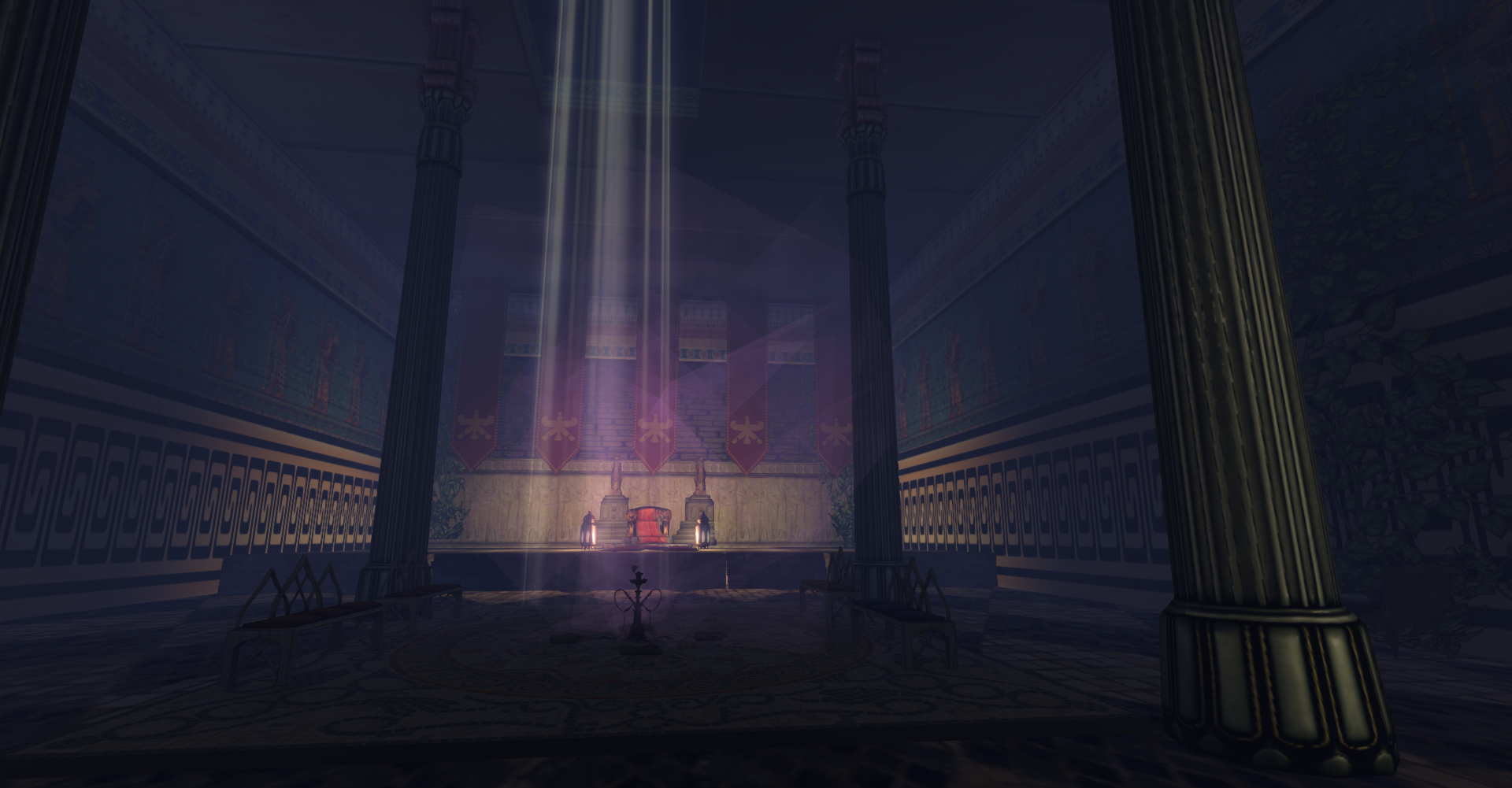 I stopped to meditate for a little while before leaving, because back outside there’s only one structure I’d not explored yet, the Arena and I’m not the fighting type.

Fortunately at this time of day there were no combatants about so it was a peaceful visit to this place of violent sport.

This is an amazingly beautiful region to see and wander around. If you want to join in their Roleplay there is a group joiner at the landing point as well as a vendor for their free combat system called “URA Kombat”.

Post featured on the SecondLife Community Blog on 11th February 2021.

3 thoughts on “Persia – The Immortals”