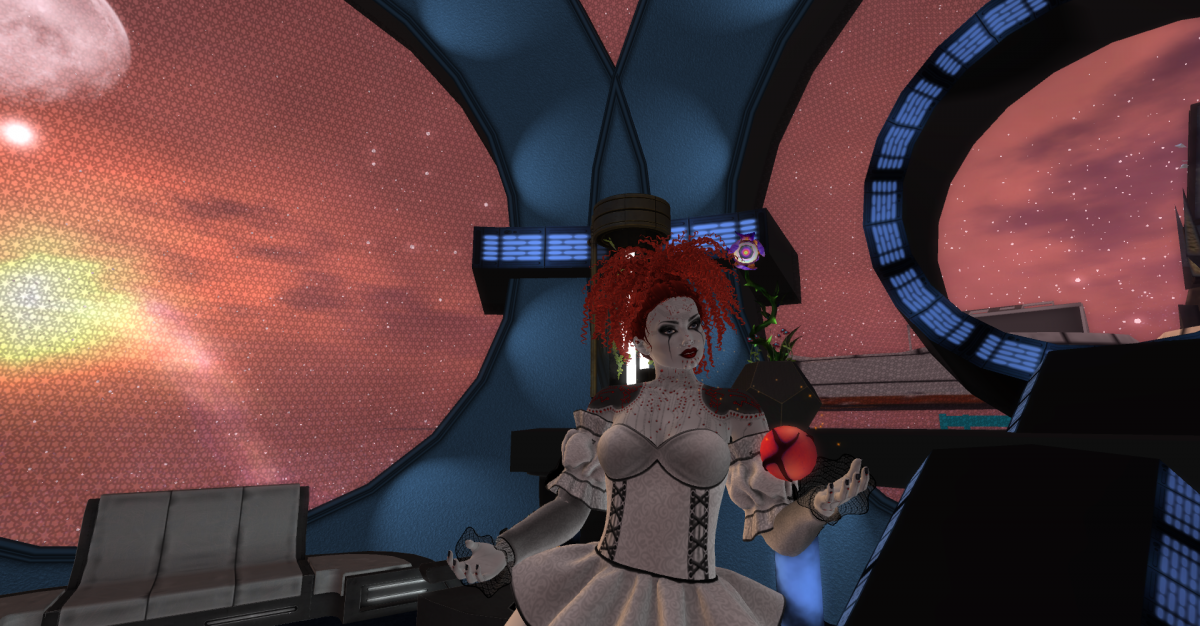 The RFL SciFi Con 14 event ran between 18th May to 29th May 2022. It was set over 9 sci-fi styled regions of different sub-genres, with shops and some entertainment events planned. Usual kind of thing for a SecondLife event, except unlike other events, the shops were mixed in among event and roleplay areas which made it less easy to navigate. I visited the event a few times, doing my usual routine of walking the regions as I do with Fantasy Faire and other location exploration. On one visit  I came to the Death Row Designs (DRD) store and found it empty, very unusual for such a large merchant and region builder.

Shortly after that on the 29th May a group notice was sent out from the DRD Group inworld which read:

DRAMA ALERT (1st in 12 years) we packed up our stuff at scifi con.

we’ve had enough of the bad management and they also banned us from their discord, for sharing a song (?)

We will have rfl vendors out still at scarlett bay to support RFL .

In our 12 years of doing events, scificon… took the cake.

We’ll be back and lots of good events coming 🙂

Before continuing I want to clarify how the American Cancer Society (ACS) fits in here, as they are the benefiting charity. The ACS doesn’t organise the events, so they are in no way at fault here, if anything they are unfortunate victims. They entrust the running and organising of fundraising events to a Lead organiser and give them as much autonomy as possible. This allows organisers to create unique events as they see fit. Also it should be noted that the SciFi Con discussed is a completely separate RFL event to the “SciFi Expo” that happens at a different time of year.

Clearly something had gone very wrong here, what went wrong depends on who you ask though.

Last minute addition: The Organiser Statement words above were the comments  recived from Pixi (Destimona Resident) which I believed to be the official statement while writing this. However right before publishing she told me there apparently was another official statement by Milena, which got passed to someone called Zorina, who is a member of the Senior Management, but never passed it onto me.

I’ve been trying to piece this together for over a month now and it sounds like it was quite a mess. The reason it’s taken so long is two-fold.

First I had a meeting with the Director of the American Cancer Society (ACS) and some of his colleagues on the 10th of June. I agreed during this meeting that I would give them time to do their own investigations into it and that I would share with them whatever I found.

Secondly I couldn’t get any of the organisers of Sci-Con to respond to my requests for their side of the story.

So I started asking questions, firstly from Jaimy Hancroft the owner of Death Row Designs (DRD), she had plenty to say on the matter and not much reflected well on the organisers. I proceeded to ask some other store owners, a region builder and even a staff volunteer who was willing to talk to me, for their comments.  They all told the same story of bad management and mis-communication. So far without comment from the organisers, the evidence was looking pretty damning and they weren’t defending their actions.

Fast forward to the 8th of July and the Con staff held a public meeting that I attended. This too didn’t paint them in a great light either, the senior admins had decided amongst themselves to form a Council and remove the Lead organiser, Kirk Wingtips. They sprung this on him at the meeting. I was pretty sure the ACS wouldn’t let them throw Kirk “under the bus” as someone described it at the meeting.

Both said it had gone well and they would be moving forward to run another convention next year, using the management model of the Council proposed, with Kirk as a member and the face of the event. While this is a good thing from a fundraising perspective and for the organisers I was a little surprised. But as mentioned at the beginning the ACS don’t organise the events they’re just the benefiting charity.

Then *finally* I received the statement in a notecard from Pixi that you can see in the table above. It stated that some individuals (meaning DRD without saying it) “had been asked to leave” although the actual wording used wasn’t that polite apparently.

However it didn’t change the fact that three other stores, a respected region builder and a staff member told the same story of appalling communication and lack of organisation at the event. The drama surrounding DRD departing was what had got my attention, but once I started asking questions,it became evident there was much more to it. The second part of the statement from Pixi covers this, talking about people having real-world commitments but really that doesn’t stand up, other events still manage and work around these, but at least there was admission that there were mistakes made. But frankly this statement was too little too late.They had been worried about me making them look bad it seems, but they really didn’t need my help for that, if you read the logs linked at the bottom of the page.

One of the biggest issues though with this being a fundraising event was a complete lack of promotion, publicity and advertising. The way you normally do this in Second Life is bloggers.  They are Media of the Metaverse. You put out a call for bloggers a month or so in advance and when your event starts, they’ll tell everyone about it for you. There was none of this for SciFi Con except a valiant effort by a store owner to get the word out using their own bloggers, but really it was too late by then.

So what happens going forward? From what I see they have a lot of work to do. First formalising their Council, assigning roles and basically creating an event management team from scratch with shared access to the various required accounts to allow transparency. But while it’s a different management structure for the decision making processes,are they just wallpapering over cracks? I’m sure there are some great people with good intentions here, but as Pixi said in her statement “there was a lot of juggling”, I think several departments dropped their metaphorical ball this year. Hopefully next year they’ll hold onto them better for their 15th anniversary.

I admire the ACS for giving these folks another chance, but what charity is going to turn down donations? After all, the Con did raise over 4 Million Linden Dollars,equating to $16,494USD for the ACS.

Below I’ve linked copies of the conversations I had and comments I received. Some have been anonymised on request to protect the stores respective brands, consent was obtained from all those quoted. I’d recommend reading them so you can form your own opinion.

I’ve tried not to make this piece about the drama, the issue is more about the overall poor organisation of the event. However when I’ve heard about the financial difficulty this has put DRD in and SciFi Con community members advocating not shopping at DRD, I think that really is wrong. I gather some of Jaimy’s associates may have made uncomplimentary remarks (which no-one is sharing so I can’t comment on that), but that’s not on her. Jaimy dropped lots of other events to try and make the Con great, bringing lots of merchants to the event. Even Pixi agreed Jaimy deserves an apology, she lost nearly half a year’s worth of store income having started preparing in January and banking on the Con being as great as it could have been. I have a lot more of Jaimys story I could have told, but have left it out, out of respect to her, since she’s done with all of it. Perhaps I shouldn’t have waited for the organisers and the ACS to get around to their meeting (five weeks later is an eternity in SL), but I felt it was the fair thing to do.