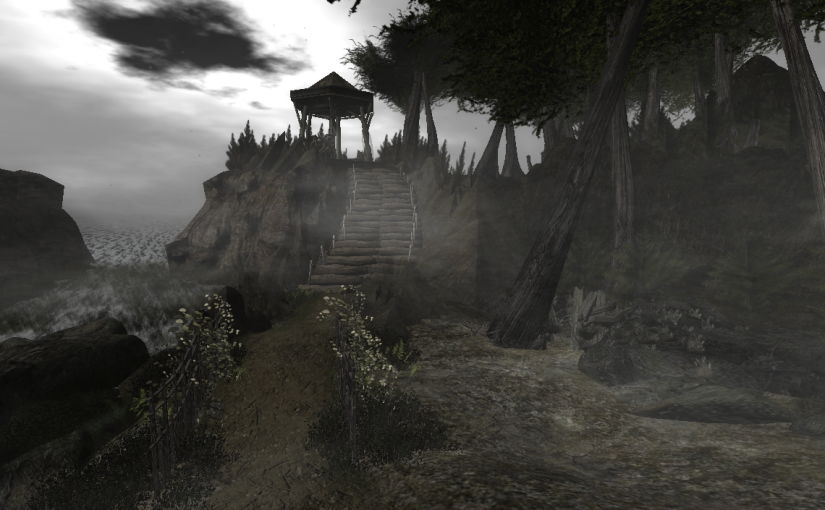 My next stop for this Halloween seasons wanderings is Dead Mans Island. The name couldn’t be more accurate, you can hardly turn anywhere without sight of a corpse, grave or some spooky sight. It’s fantastic!

I arrived in the hallway of the the regions spooky mansion, which I don’t think is the intended arrival point, but doesn’t really matter.

Behind me is the main entrance leading outside

Rather than heading out, first I decided to have a look up the stairs

So I up I go and explore the rooms

Back down stairs I went through into the next room that turned out to be the kitchen, but I don’t think it’s regular food being cooked in this cauldron!

Back the other way to the main doors outside, leading to a long pathway out into a dark forest.

Outside the gates I found this cute little night watchmen, although I expect they’d object to “cute”. 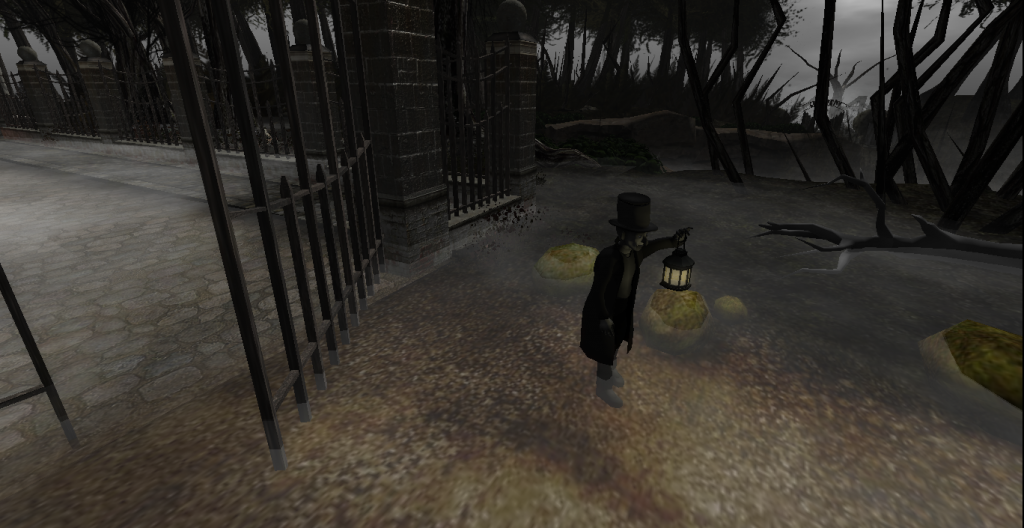 Then a glance the other way and ..uh..skeleton musicians? 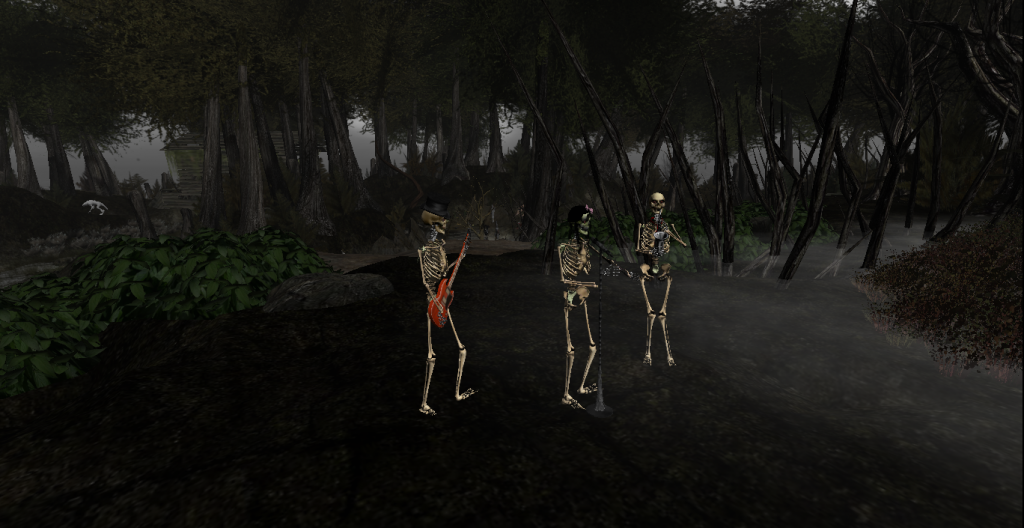 Anyway straight ahead and uphill is where the path leads 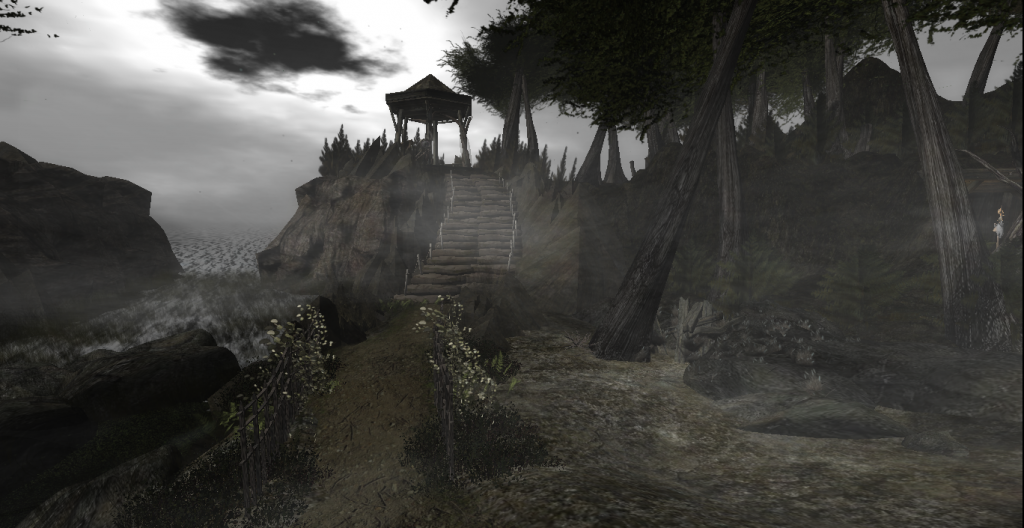 At the top I find a solemn monk statue and some suggestions this is the intended Arrival point. 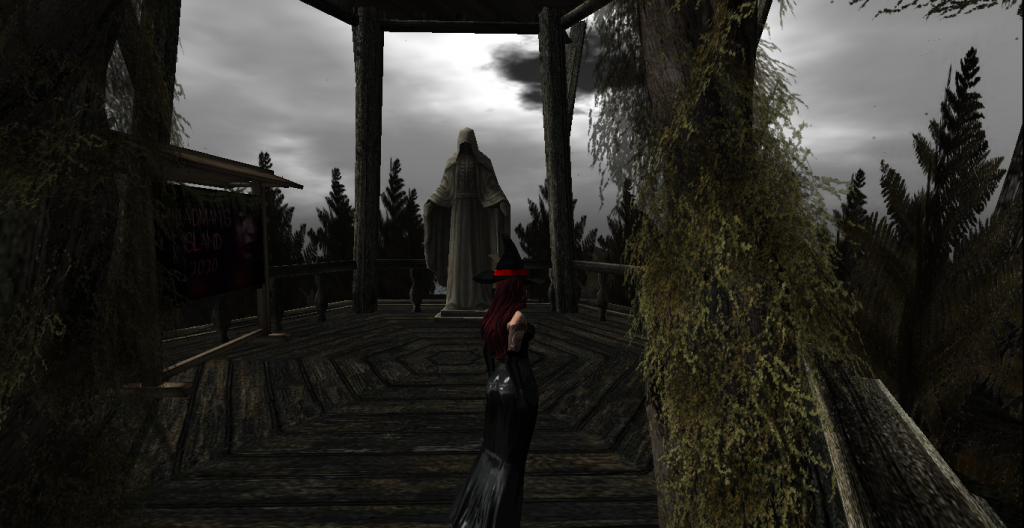 While I survey the forested and swampy landscape below, something unpleasant is surveying *me*. 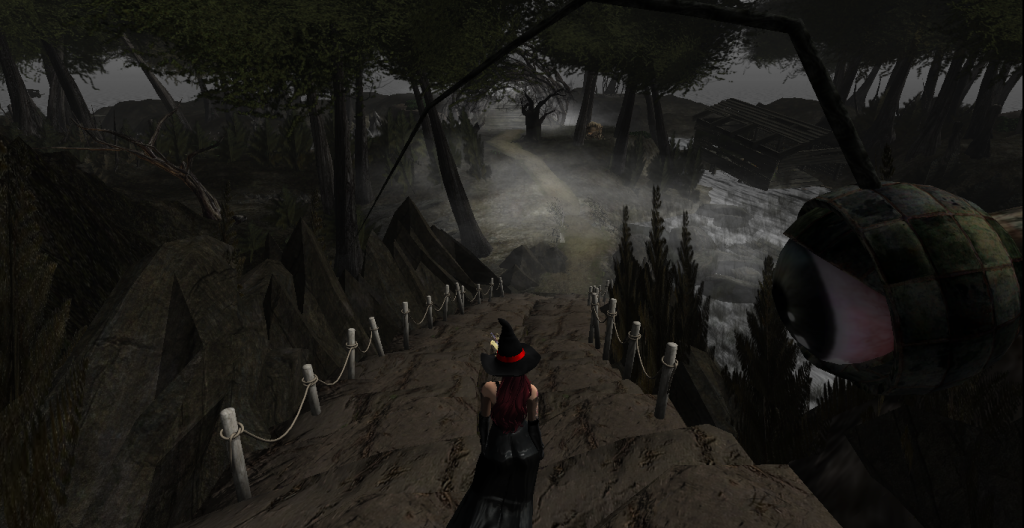 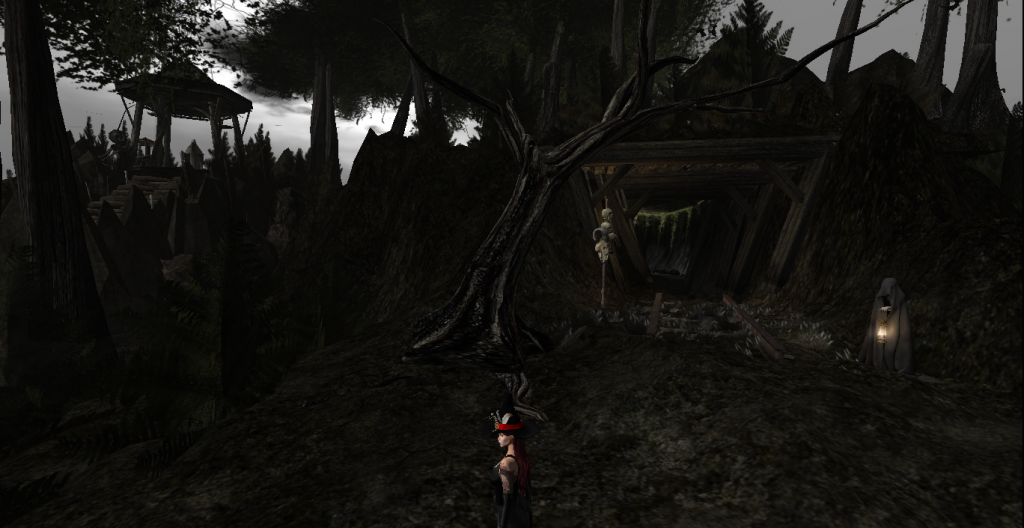 Bones outside seem a bit foreboding but I go have a look anyway..more bodies! 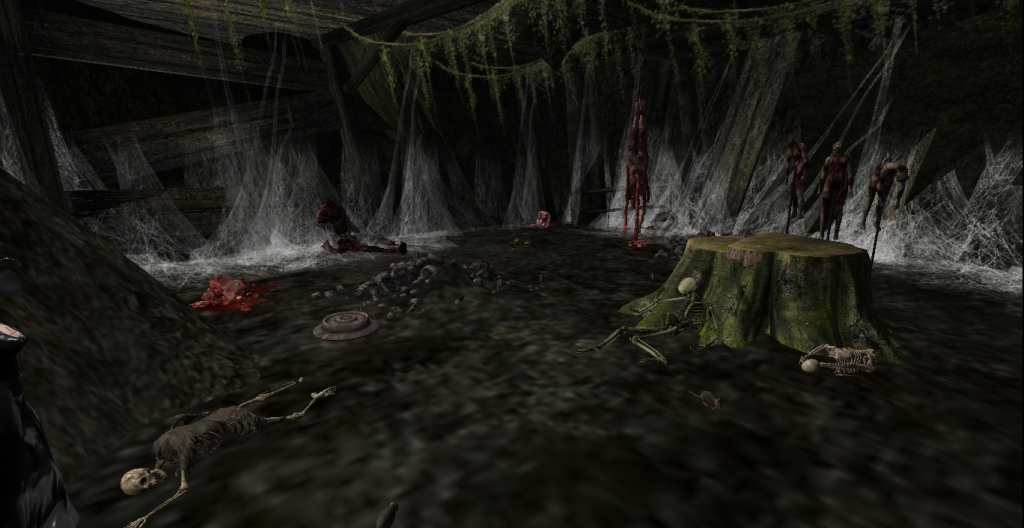 Exiting the mine I cross very misty the swamp 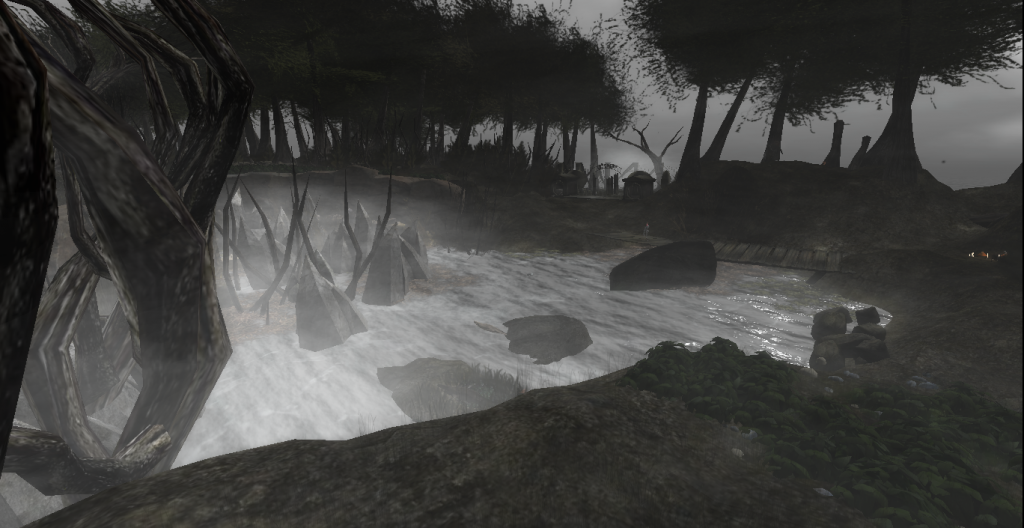 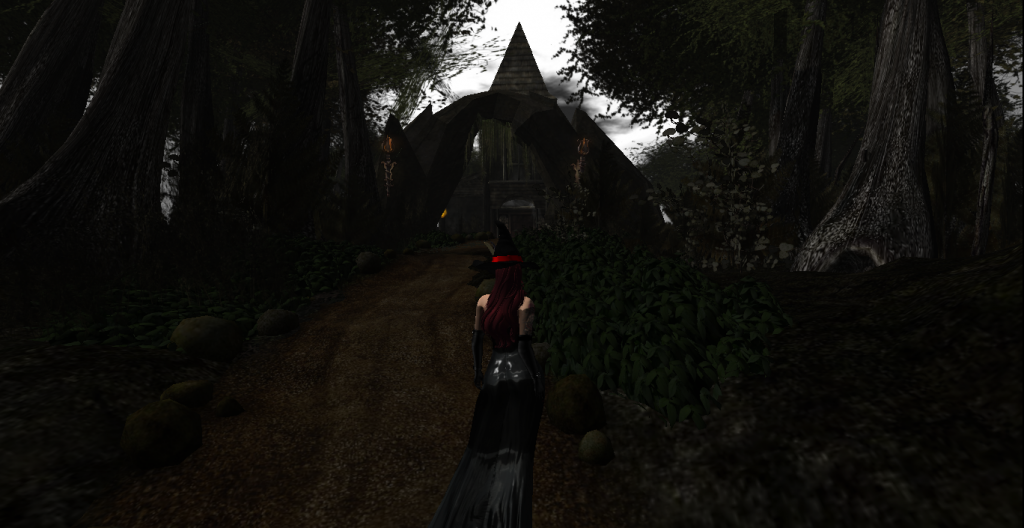 I find it guarded by some fearsome creatures, a large Demon and some Hell Hounds.

Inside I find it was at some point a church, but I don’t think there’s been anything Holy about this place for a long time!

After a respectful moment at the altar I head out again and follow the coastline, when I stop to take a moment to look out across the water, I find a werewolf and his victim lying on the ground.

I move on hastily past so as not to interrupt it’s snack and become dessert. Just in case I duck inside a little mausoleum next to the cemetery gates 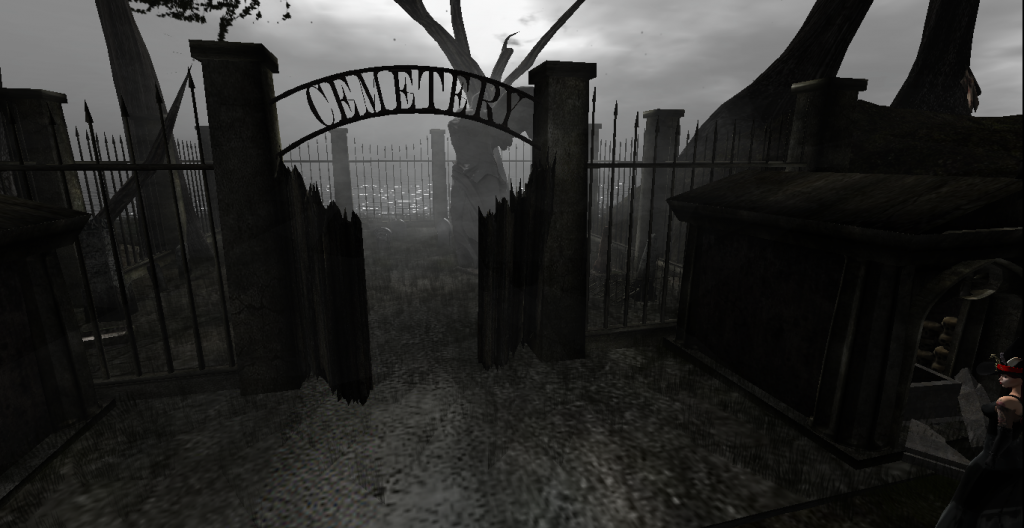 I wait inside for a few minutes to make sure he’s not followed me, it’s quite comfy! 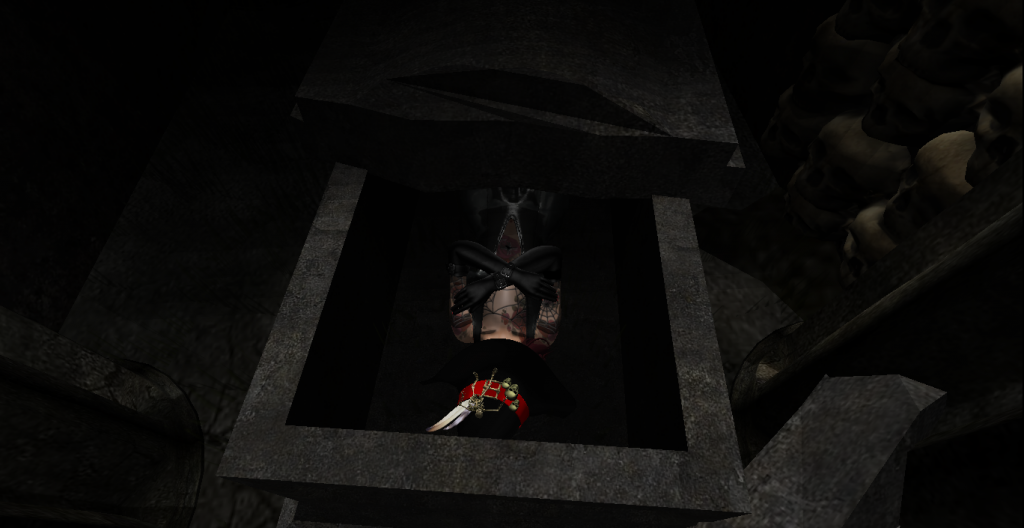 Moving on into the cemetery it seems fairly empty, presumably because most of the dead are up and about! The main feature of the graveyard is a single large Angel statue…with no head! 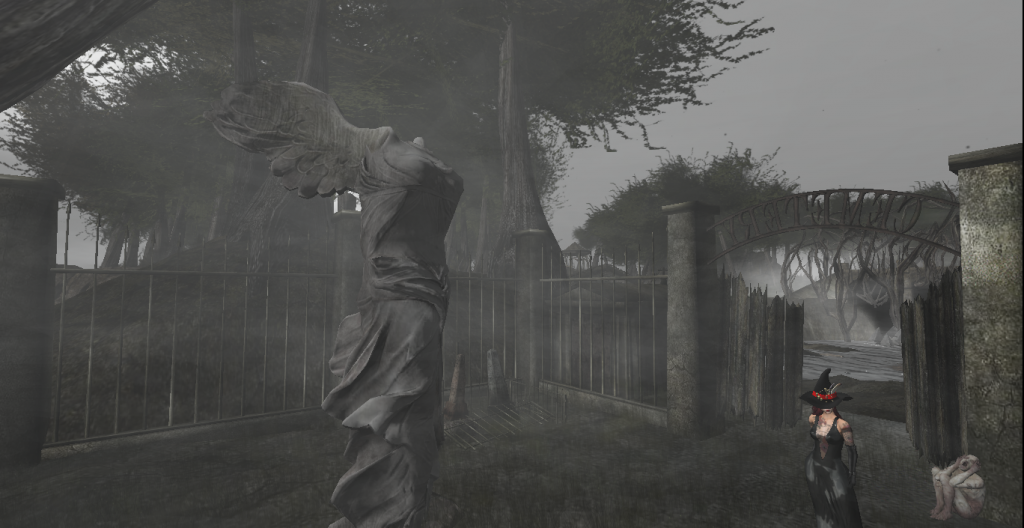 Back out onto the coast path there’s a good view across to the spooky Mansion. 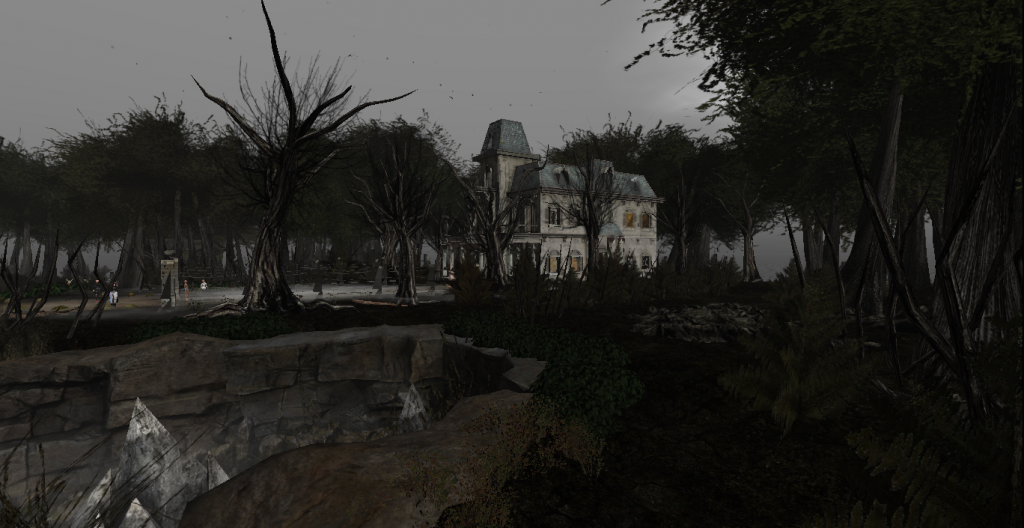 I wandered around the rear of the building to see if there was any more sppoks to be seen. Unsurprisingly there’s another graveyard. 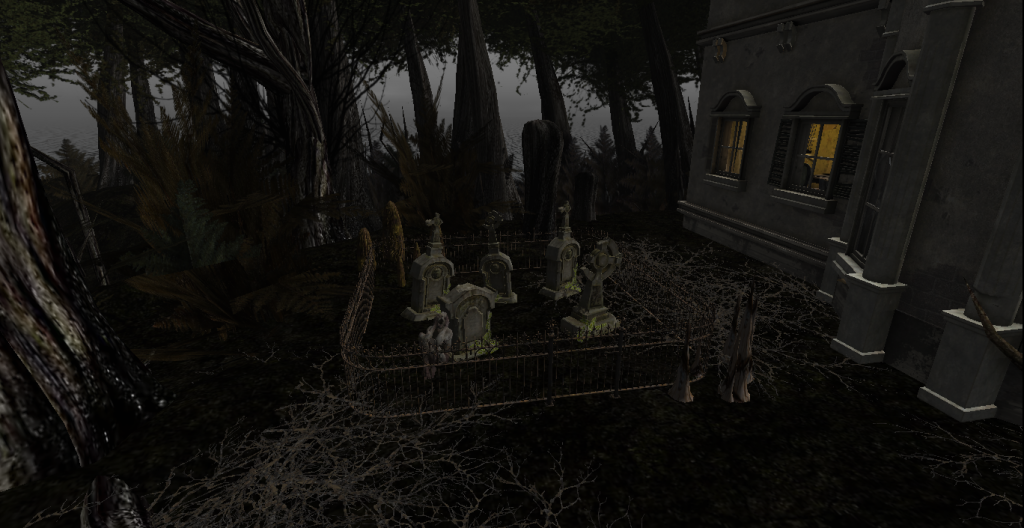 Not so many here, maybe was just the homeowner personal cemetery perhaps? As I was about to head back around to the front door, I saw a light further along the coast 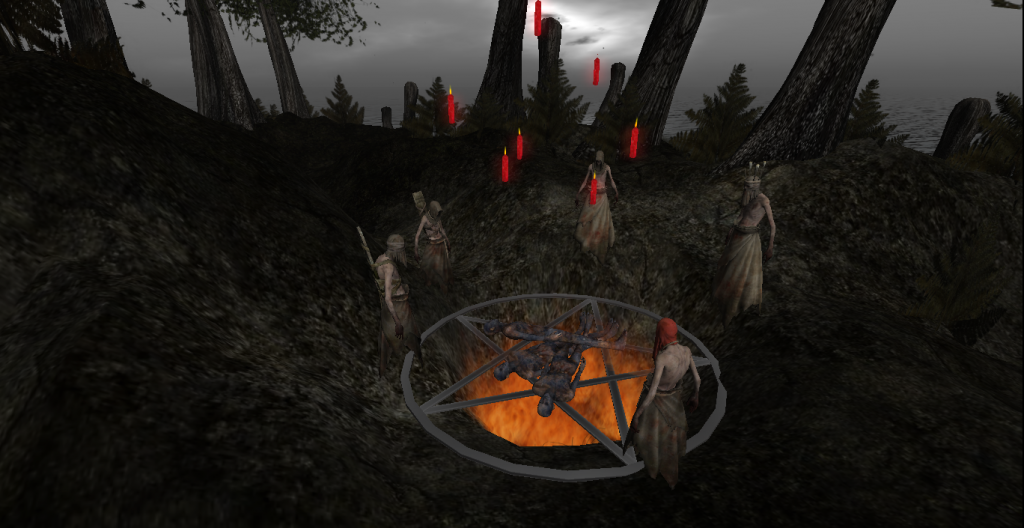 Maybe the houses former inhabitants aren’t at rest at all!

Even the nearby vegetation is looking far from healthy! 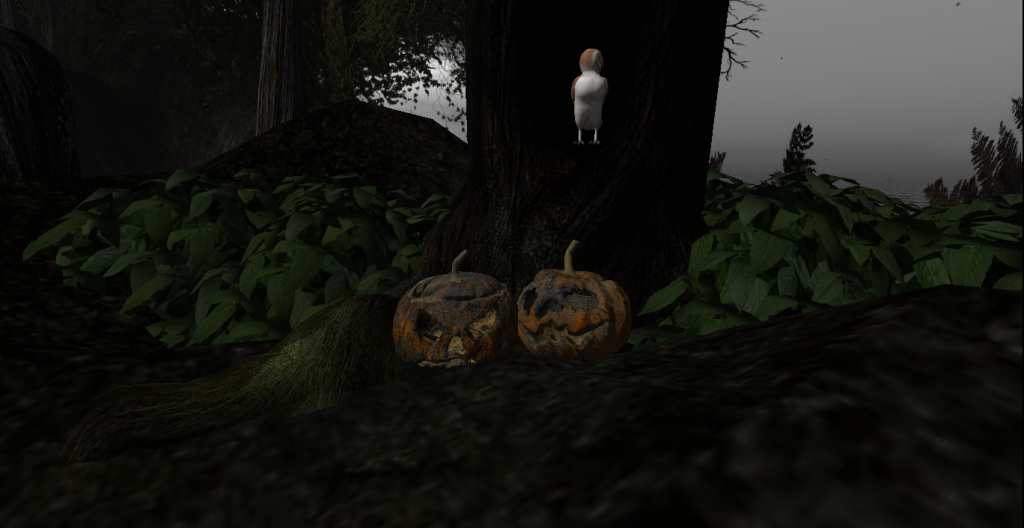 Dead Mans Island definitely should be on any Halloween fans list to visit.