Update note: This location is no longer as described. I don’t know how long ago that happened.

Having been reading a few SL blogs lately I was inspired to write something. After seeing this post by SL Bliss I decided to go and check out the sim she used for her background. I arrived at the photo location in the middle of the desert and began to explore. Having come across several “Danger” signs that I found myself approaching from the wrong side, I went in search of some kind of intended arrival point. After a rather long run through the desert (flying is disabled and there are four sims), I found what appeared to be a main inhabited area. A building on one side contained a vendor for a “Spice Scanner” and a machine for apparently trading in what you found for medical packs and such. Combined with the Danger signs it became clear there was some kind of damage system in place on the sims. Across from this was what appeared to be residential or commercial buildings, but I decided to try out the shuttle parked outside before exploring it. 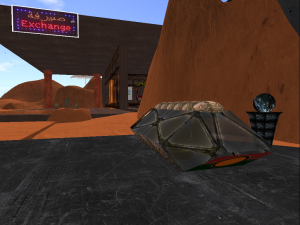 The shuttle took me on a rather bumpy ride (standard sl automated transport style) up to a space station. There are a number of different landing decks, a control room and a lounge bar up there.

Back on the ground I acquired myself a Spice Scanner from the vendor and after finding a couple of pieces of “Araxes Ore” a local inhabitant arrived and offered me a tour of the adjacent buildings. The large collection of buildings I had seen make up the “Two Cities”, Old and New. The Old city is located in a collection of caves in the sandstone cliffs with a small market and some shops, a ramp leads up to the New city. This New city is much larger and on multiple levels which may take some time to explore properly. 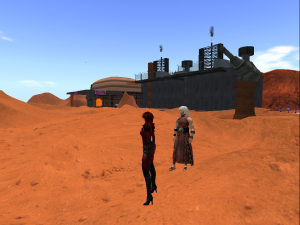 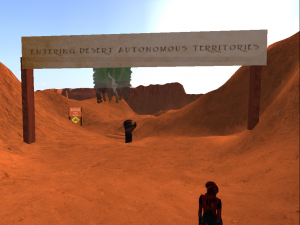 From the vendor in the entrance I got a notecard, giving me various bits of information including:

If you stay on this path, you will arrive at the Araxes Desert FreePort in several days. At the FreePort you will find: Landing Docks for people wishing to engage in duty-free trade Local Merchants at the docks and on the path to Haven Haven Bar – a place of rest and respite Companion House – a place of rest, respite and companioning The Enclave – a village with housing available Entry to the Path to / thru the Deep Desert

So I followed the path which was not entirely empty …

Arriving at the FreePort there’s plenty to explore As you can see from the last snapshot, the desert is extensive,you can enter it by walking to the rear of the Haven club, be wary on your explorations!

Location: http://maps.secondlife.com/secondlife/Bourbon/131/217/21 Note: You’ll want your draw distance at least 192 due to the spread of the buildings.

One thought on “Araxes Sci-Fi Roleplay ”