So I was now a merchant, with a base in a remote outpost.

In Gor there is a very rigid caste hierarchy system, each with associated colours that are worn by people to identify them. In my case being born of a Tavern Keeper father, that made me of Merchant caste,which has the colours white & gold. I decided if I was going to do this,the red dress would have to go and I’d have to adopt my caste colours.

My first step would have to be re-establish contact with groups and individuals that had passed through the tavern and already knew (and so wouldn’t shoot me on sight). Gor is not a very safe place for a lone woman.

This would have to start with Dani’s camp nearby to see which of my tavern workers Bodi had been able to retrieve and deliver there, since doing this on my own would be far from practical and a Free woman without servants would be very unusual.

Bodi had been able to find five people, four females (Dove,Lips,Mara,Shirin)and the single male (Nemo) I had acquired not long before the fire. However only four were present at the camp. Bodi found out that Mara,unbeknown to me, had been asleep upstairs in the tavern! Fortunately she had also made it out but lost her way in the dark and wandered for a time before finding her way to the Ikeri camp after I had been taken from there by bodi. I would have to collect her from the ikeri camp.

So I made a list of who I had to visit after Dani and packed up my trade samples.

I had prepared some sample barrels of drink as gifts for the groups I would be visiting, with my new trading symbol instead of the tarn bird of the tavern.

First I headed back to the Ikeri camp in my new Merchant clothing, including a hooded veil. Veils were not often worn in the North,despite being mandatory in the South, but I wanted to disguise my identity to some degree for the time being.

I arrived at the Ikeri camp and was let in by Mara, who did not recognize me in my current guise, but I was apparently a Free merchant wanting to trade. Inside the gates I removed my veil and Mara nearly fainted with surprise. First she was pleased to see me, it had been over a month since bodi took my prone body away in a boat, she did not know if I had survived. That quickly turned to fear which I was not expecting, it turned out she liked living with the Ikeri and didn’t want to be taken from there. So I spoke to Sky.

The feeling was apparently mutual, they liked having her there, she was a nice girl and a good worker, so it was agreed she would stay there under their care and protection.

I had decided it would be useful to have someone in these parts that could keep me updated on local affairs, for example I wouldn’t want to be bringing goods to trade into the area if there was a conflict between locals.

So my next visit would be to the Sheku to the south-west. I knew one of the former Shekinah Arani, Tara Freckleface, had gone there after the Forest Moon incident. So it would be safe for me to approach and would be welcomed. 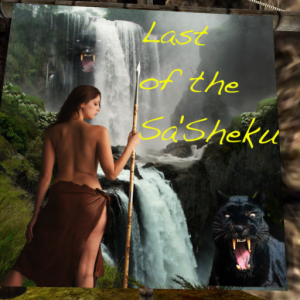 Ava smiles and hugs her friend

Ava: good to see you in so long

Tara: If you have a weapon, just drop it near the gate inside, dear. But we welcome

Ava drops her whip to the foloor outside and steps in

Tara: Be seated my friend *smiles*

Ava: I may no longer have a tavern, but my new role as a merchant will still involve drink..a sample

Tara smiles and pulls Ava close, half in her lap, but then she sees  a containerd offered to me…”For me? I’m surprised”

Ava: I chose that for my mark

Ava: in red instead of black

Ani: will you go trade Kristin?

Tara looks sad “No tavern any more? how come?

Tara: You mean the tavern at Elation?

Ava: the tavern burned and i fell in the river, but I have other friends and was cared for while I was sick, so now I have gone from tavern keeper to merchant

Ava: you recognize the mark I presume?

Ava: I thought it apropriate

Tara: The white and gold matches beautiful with you sis *smiles

Tara: Yes, I recognize the mark on the barrel, I will try not to notice it.

Tara: It has bad remembrances

Tara: But paga is unpolitic hehe

Ava: ah, but in red it is my symbol of defiance

Tara: In that case I apologize

Ava: it is fine

Ava: you all seem quite settled now

Tara: Yes, I am… I have found a home, an own hut sharing with my sis Jess *blushes*  and thanks to the Goddess no responsabilities, just an huntress… the only thing which worries me is that I might be expecting…

Ava gasps “Oh..my! That is not good!” Rumages in her bag “you want some slave wine to fix that?

Tara: Too late, I fear, but thanks… slave wine does not make undone a pregnancy, it only prevents it

Tara: I have been raped by a wild Tuchuk… it was awful

Ava: I used to give it to my girls regularly, never had to deal with the after

Cally: nice to see you here

Ava: I brought a small gift, a small barrel of my brand of paga

Cally: so what news from your travels Ava…..I see a massive outlaw fort is being built in Three Moon Valley? “

Ava: I would not know

Ava: I visited the ikeri recently but didn’t explore any further there

Tara: I saw that bunker too…

Ava: unfortunately on my first visit, forest moon raided them while I was there. So they now know I survived my fall into the river, which is unfortunate

Tara: Ikerei you visited? You know Prinven? She’s manufacturer of wonderful perfumes. A merchant should be interested!

Ava: I do know her, I did not have time to talk trade on my second visit, I was there to check up on some property that I hoped they had found.

Ava: My girl, mara, was still in the tavern

Ava: she ran from the fire and to the ikeri camp

Ava: they saw my collar on her and took her in

Tara: And sis you find her?

Ava: so she is well and making herself useful, so I have my own eyes and ears in that part of gor now

Ava: she was terrified when I arrived, thought I would take her away from there. But it serves my purposes beter that she stay

Tara looks at the tribe flag and shivers at the strong breeze from the west, then answers Ava: “Ikerei are good people generally…  “

Ava: Sky pulled me out of the river..so yes!

Tara nods  has it been clarified how the fire originated?

Ava: I am now setting up my merchant business in a northern outpost

Tara: Well, I certainly will visit you, buying some beads and mirrors *giggles

As you can see the camp was attacked while I was there. So since I’m appalling at combat, I stayed out the way, but rather than sit idle, I played paramedic. The GM system allows for players to “bandage” each other, restore their hit points, so I ran back and forth along the wall bandaging people when they got critical. This was well appreciated, they said they’d probably have lost if I hadn’t been bandaging. Half an hours good deed would be remembered in the future no doubt.

I look at my list of contacts to visit and pondered where to go next .. Continued in Part 5