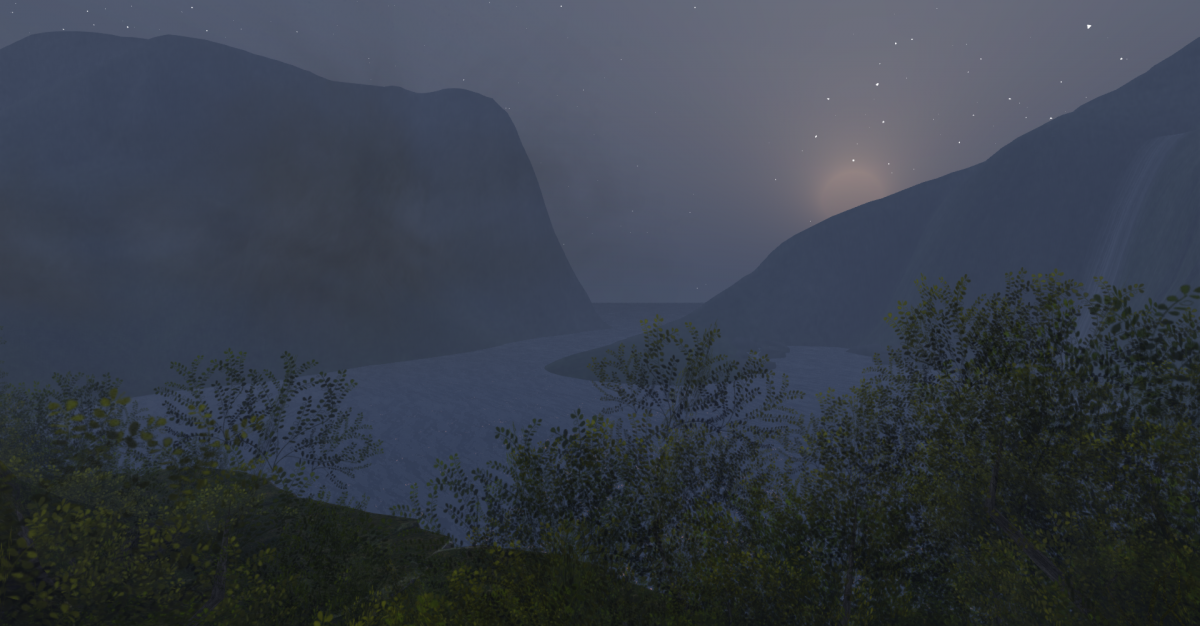 “The Woods were made for Hunters of Dreams”

Quote from a painting in the Castle you shall see.

The arrival point here is a small round tower with not much information there at all, because the place speaks for itself.

You step out into a mystical woodland, large trees and clearings with shafts of light make it feel magical. 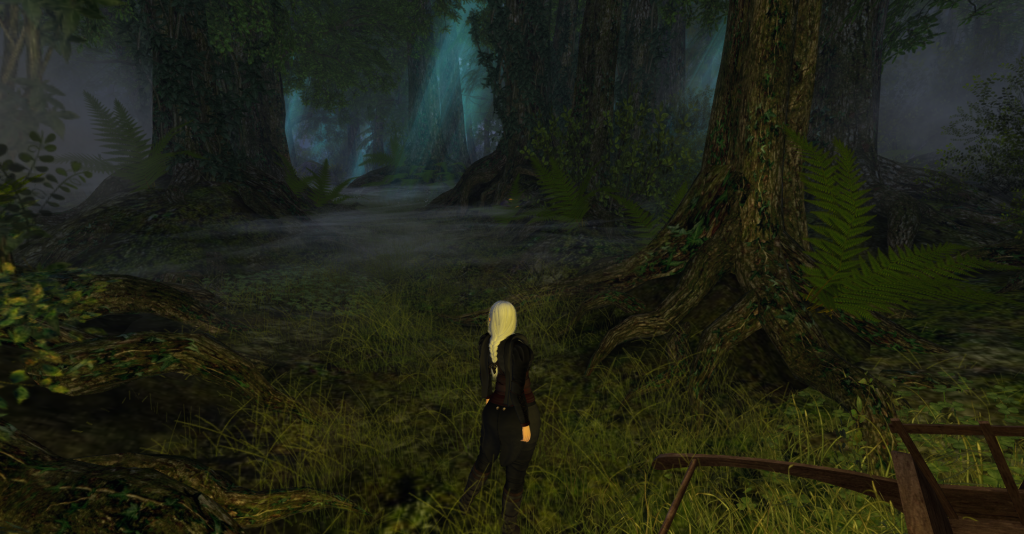 The first hints of mans encroachment are some ruins visible through the trees, but before I find my way there I come across a miniature stone circle. Noticing movement near the ruin I don’t want to disturb other explorers, so I go the other way.

This takes me to a small stream that I cross via a log bridge and find myself at the bottom of a set of steep stone steps. I can see as I ascend the steps the looming form of a large castle.

The steps bring me not to the castle itself but a path running below it.

To the left it slopes down towards some kind of habitation, I can see a windmill down there. To the right the path slopes upwards and winds around the castle mound leading to the entrance.

However before I get there, a large full sized stone circle is just off the path at the corner, which is enchanting! 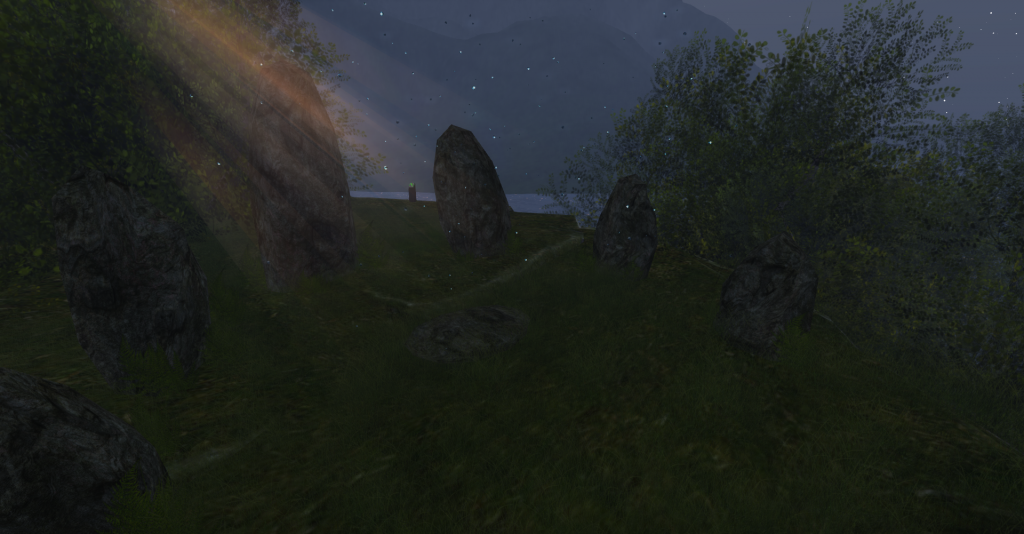 When I reach the castle entrance I discover a sign that tells me there is artwork within the castle created by Cybele Moon. So not only are the surroundings beautiful, but they contain art as well.

I might normally take you step-by-step through the castle, but in this case there’s not really much need, it’s basically circular with a series of corridors throughout (pictures of corridors aren’t that interesting when you’re in an art gallery). I would simply advise taking each staircase, up or down, that you come to and you’ll probably find everything there is to see.

I leave the castle and head down the path to the settlement I’d seen earlier. This seems to be a crofters cottage or similar that you might find in rural Scotland or Wales. It’s in a beautifully picturesque setting, next to a river banked by hills on the far shore.

Its the kind of setting that would make a lovely landscape painting and I felt like I was walking through one. 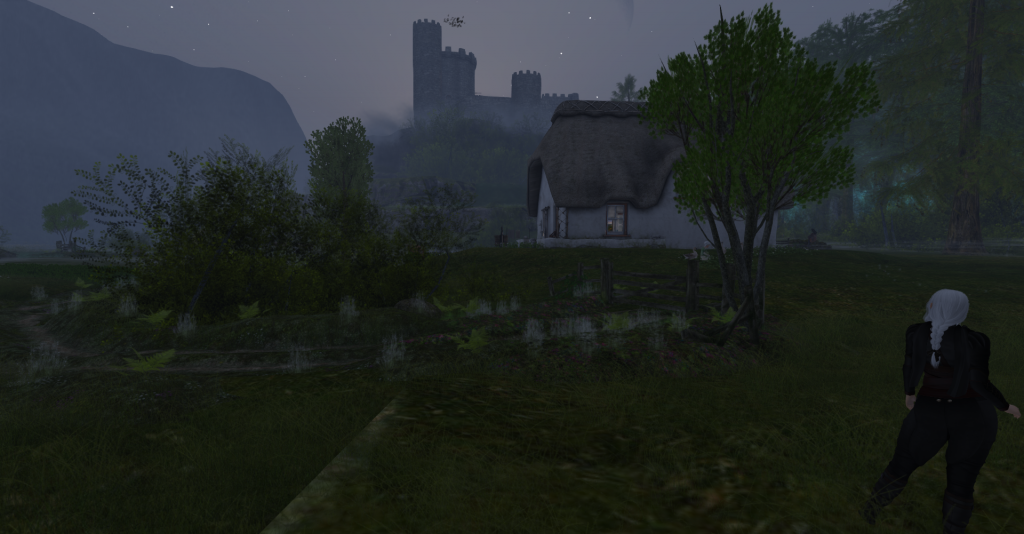 I follow the shore of the river around to the far side of the cottage that leads me back into the forest and to the ruin that turns out to be an old Chapel.

To be honest I recognised the ruin as soon as I saw it since I have the very same one at home that I used in my post “The Demons Lost Secret” during Fantasy Faire. This one appears to have a resident spirit occupying it. 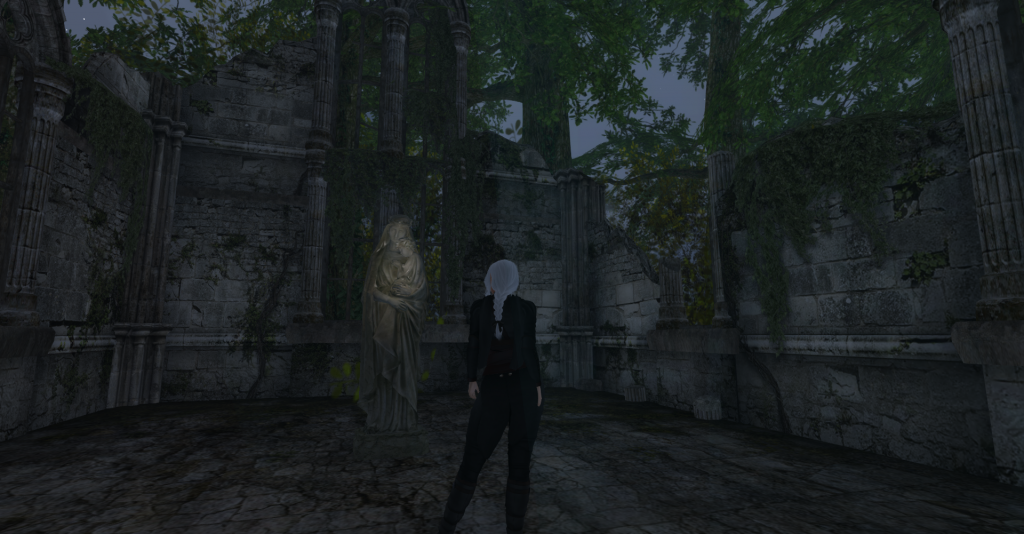 Definitely worth a visit for both the scenery and the artwork in the castle.

One thought on “Celtic Mist – A gallery inside a masterpeice”